I’ve been mindlessly ignoring, for years, references to rose water, and its beauty and theraputic effects. Just one more thing to buy, and manage… and it’s just “water,” isn’t it? 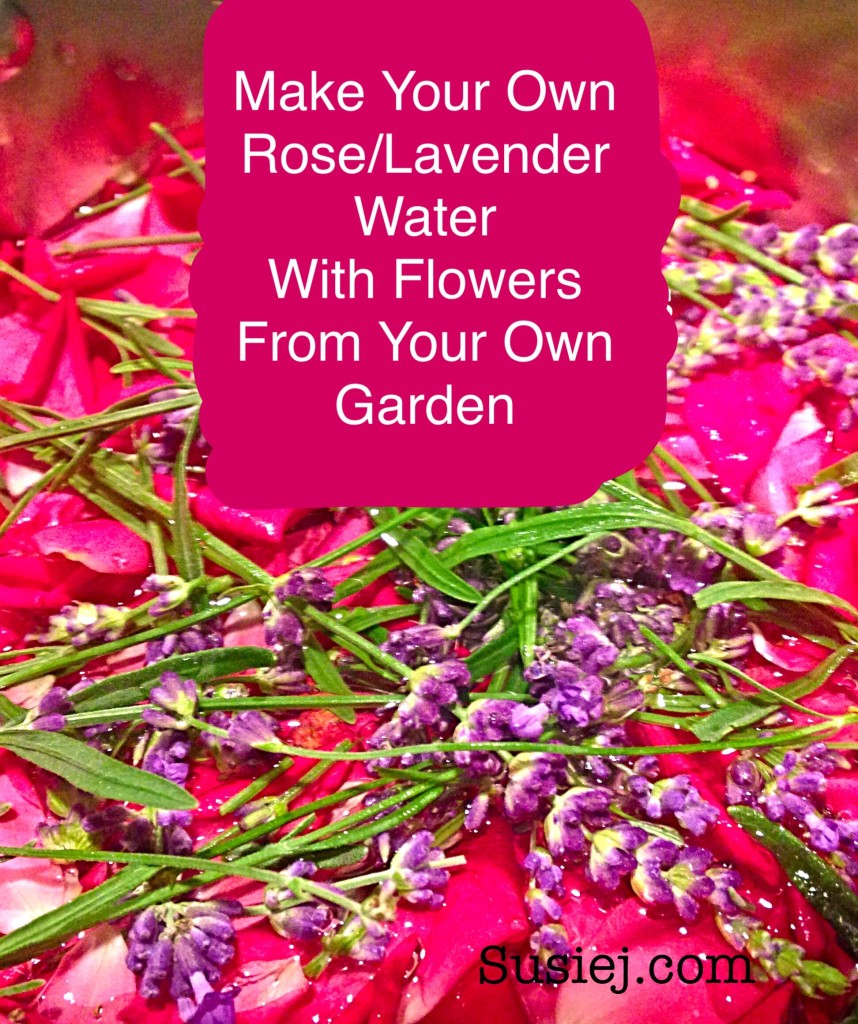 Isn’t this pretty? All girls need to have something this decadent simmering on her stove, now and then.

The Huffington Post reports that it’s been used since the tenth century, and as a major health elixir… including bladder infections.

Refinery 29 says, “Rosewater is a great gentle, natural ingredient with many skin-enhancing benefits,” says Maria Barry, a medical aesthetician at Union Square Laser Dermatology in New York City. “It can help hydrate, refresh, soothe, and cleanse your skin.”
Besides, what a great way to freshen your sheets/laundry with rose water. It’s a luxury I’ve been passing up on for far too long.

And the petals that flourish in abundance on the rose bushes by our front door started calling my name… For several years now, I’ve been ignoring them. Which is so unlike me. I’m the type that likes to squeeze every last drop of goodness of what nature gives us. Daylilliles, Nasturtiums, Basil, Ginger — and even Honey, just to name a few.

So, I did some research, and I researched some more, because the process for making your own rosewater looked too simple. I was clearly overthinking the process — or maybe I was missing something. So, I lugged home three gallons of distilled water, gathered the rose petals from around the front door, (the roses are stripped), and started the process. (The three gallons of distilled water were not all for rose water…another story, another time.)

Meanwhile, I thought, why not add the lavender that’s ready to be picked, and throw that in as well? I did a quick Google search, to see if lavender water can indeed be made with this process, and while not as popular as the rose water, it was a yes, all systems were go.

Just a note here. The recipe calls for only rose petals — no leaves or stems. So, that I followed. But I remember reading somewhere that the smell of the lavender is strongest in the leaves. Â So that explains why you see lavender leaves still attached to the lavender blossoms.

The boys, knowing they will never touch the stuff, thought the whole process of cooking flowers was all too girly, and a bit too cute, for them.

So, I know you probably have access to rose petals somewhere, and maybe even some lavender. And yes, you should do something with them — you can’t let those petals just fall to the ground and wither. Aren’t they precious, and they feel like velvet? If you grab them now, the rose bushes just might have time to build another set of petals for you, before frost.

Here’s what you do:

Later, I’ll show you how to turn it into a finishing spray for your make-up — yes – -there’s such a thing. (And you were wondering why everyone else’s makeup looks so great at the end of the day, and yours doesnt?… This is why. Â No finishing spray!)

Burlap's Opposite Attraction
B...
Will Love Keep Until the Morning?
I...
Friday Night At the Lake
...
Are You Claustrophobic?
W...
To Those Who Abandon Their Own Storefronts
M...
Casper and Casper Junior
I...
Share on FacebookShare on Twitter
clean, Gardening, Life, Make Something, Try This