There is a “fall break.” It’s just two days, no school this coming Thursday and Friday — so he’s will be arriving home on Wednesday night. There are quite a few other schools doing the same exact thing — which means they will all get to see their friends. 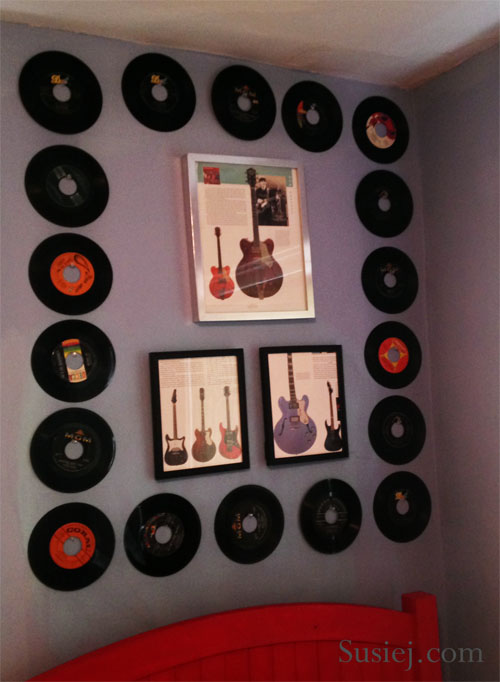 Personally, I can’t imagine how fun that would be.

Even though I will have the crockpot on simmer, full of homemade hot chocolate on-demand, I’m expecting him to be gone for most of the weekend, going here and there, to spur-of-the-moment places that come pinging in as texts roll back and forth between friends.

Except at night time… when it’s time to sleep. I can hardly wait for this. To put my head on the pillow and know that all four of them are sleeping under the same roof… and I’ll get up first, quietly stirring in the kitchen making breakfast for all of them, as they come tumbling downstairs at random times — the baby first, and the teenagers last — several hours later. Â At lunchtime, really.

His room was taken away. It was inevitable. In a house full of four boys, with real estate sparse. This he knew in advance. For weeks, his “stuff”, the 18 years of memories accumulated — the discarded stuff that didn’t make the college stuff, sat in the hallway. I couldn’t imagine what to do with it. I sent him texts with questions, and he said, he just didn’t care.

So, I did what mothers do. I cared about it. I saved it, stacked them, sorted the wheat from the chaff, and kept the essentials. And I bought new tubs, and stored them all.

Luckily, the boys left one small room for him. The room that the rest of the boys all fought for, and claimed as their own. But when it came down to it, nobody moved in there. Â The two little boys stayed together after all, and the teenager moved into the bigger empty room.

So, we had this “spare room.” Tiny. But perfect, really.

With his “kid” stuff moved out, I salvaged a few of the wallet-sized timeline photos from his life-story graduation party display and hot glued them onto an old window frame screen. (Still thinking about painting the frame blue, but it’s fine.) 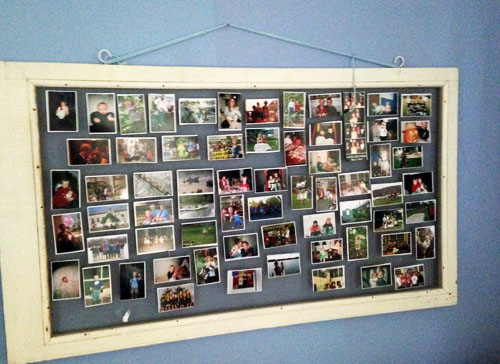 I’m working on printing a picture he recently sent me of him with his girlfriend to frame and hang, along with this picture of “Crew.” 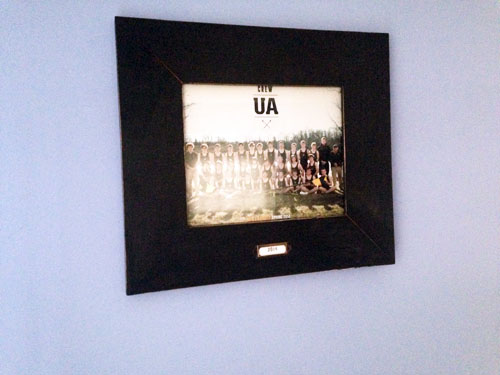 He never really cared for me “decorating” his space to match his interests. But since he’s technically “out” I took the liberty of pulling out my old 45s (yes, I am that old)

and hung them up with push pins. Then, because of his love for guitar, I found a vintage guitar book and framed some of the pages.

I think it’s perfect for the nights when all four boys are sleeping under the same roof.

Sadly, he went back to school today
A...
Keeping Flies Off Your Picnic Table!
T...
My Inspiration For Halloween
I...
I Can't Do This To All My Soap...
N...
Figure that
O...
Just Like Curious George
H...
Share on FacebookShare on Twitter
clean, college, empty nest, Household, Laugh, Life
One comment to “He’s Coming Home”