I really shouldn’t be running. Not cut out for it, and I never have been.

At least I run alone. I don’t ask anyone to run with me, and I don’t ask to join others — I’m Not a burden. I run in places where people don’t even know my name. Even as a kid the thought of having a tight chest and becoming out of breath has kept me far from the track. As I age, however, I see the discipline of running as a way to master control over so much that can’t be reined in.

Running is my private thing. It’s not about the physicality: It’s about freedom. As I age, running has become a game of mental salf-mastery. In a world that seems more and more out of control, I need to know that I could get from point A to point B, on my own two feet — if I had to.

Specifically, being able to run away from an alligator if I had to.

Even though I’ve been running s few years now, I am honestly, not very fast or very good at this. In fact, I’m getting slower, instead of faster. It is just so hard — this running.

Fear that I might have to give it up, I started doing small amounts of sprint intervals, as I way to increase my speed. Fun size recommended that I go out and just run for four hours, until I couldn’t go anymore.

“I don’t have that kind of time,” I said, unbeleiving that he could even think such a thought.

I really think he was serious.

Sprints are a much better option. Who has four hours for this? I can do 5 rounds in 20 minutes and be done for the day. But sprints almost paralyzed my back. Sprinting is harder — but it’s over with quicker. This I like.

But the first time almost killed my back. My back recovered in four days and I took off and tried the sprinting thing again. But it was getting me nothing but a beet red face, and no will to live when I was done. Worse, I didn’t believe I could actually get to point A to point B anymore. I felt out of control.

My college son reassured me that it might take an entire month for my body to learn to run faster and get used to this.

But his words kept me going. Maybe I just need to give this some more time. By the third day, I started to feel as if I might be getting somewhere.

As in, maybe I wasn’t going to die, and that I might actually be getting stronger. So I added a sixth interval to my five of 30 second sprints, 1:30 walking.

Taking my running shoes with me to Captiva for a short spring break, I saw this sign. 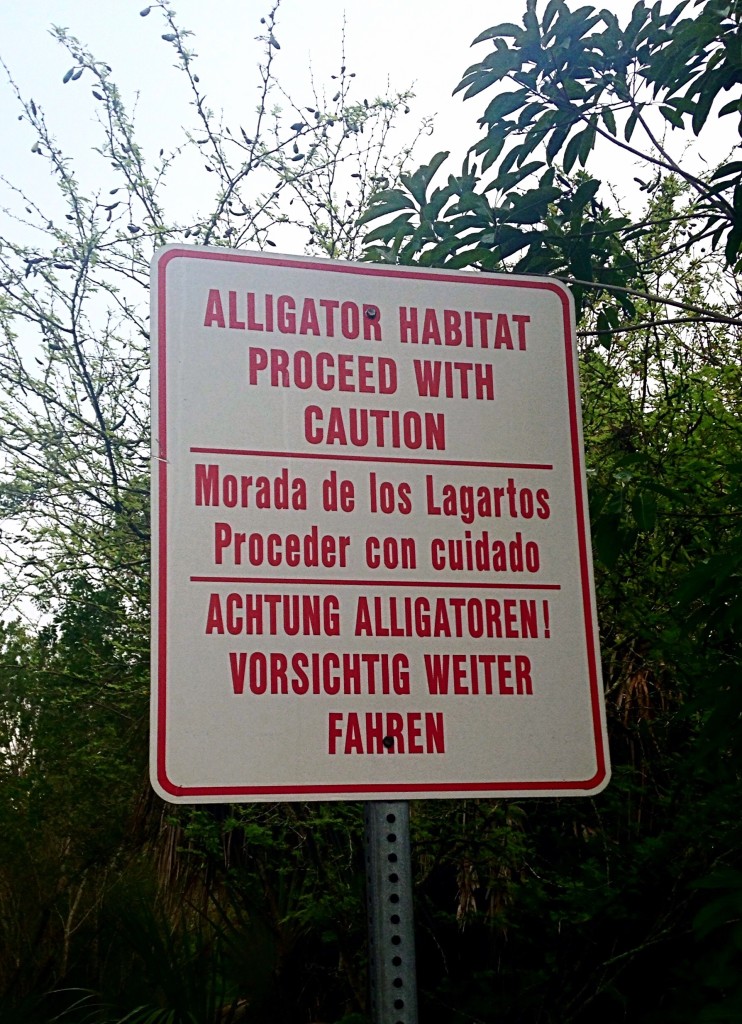 And when I saw it, I didn’t turn back. I did not feel vulnerable, as in, if I become so out of breath, I won’t be able to get out of here. Because, I knew I could et out of here.

So, I made a quick detour and went another way — because alligator wrestling is one skill I’m not planning to master. Brimming with confidence, and my face wasn’t even red.

How To Save A Donut From 3 Brothers
H...
The Christmas Party
T...
Hydrangea Gain
M...
In The Blink of An Eye, I Was Set Free
...
Oxygen to the Soul
I...
Fight Powdery Mildew in Your Garden
J...
Share on FacebookShare on Twitter
clean, Laugh, Life
One comment to “On Choosing Not To Wrestle Alligators”