School Valentine’s parties were the perfect cover-up. You could have a crush on anyone in the class, give a Valentine to that special someone, and get one back, and no one was the wiser. 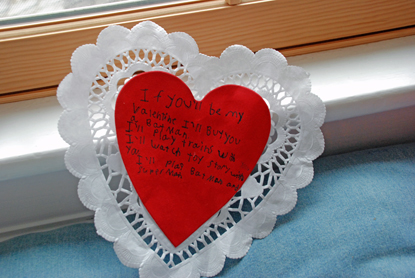 This is all about to end.

I think it was just about in January, when the boys were in kindergarten, and they had the “going to school routine” down to the beauty of mundane everyday. The kind that comes without fanfare or stress and coaxing. Now they were ready to venture outside of the realm of “me and teacher” and really get to know everyone who occupied that classroom. Not just the boys who liked the same superheros, and came to play after school, but the ones with the long flowing hair, or maybe the ones who knew how to cut with scissors, right along the lines. 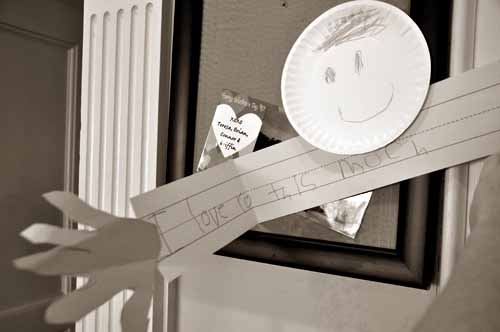 This was a window of discovery. Without even realizing it at the time, the time-honored ritual of addressing valentine cards popped up at this precise time.

Barely able to write their own names, legibly, the boys sat down at the kitchen table with the school directory, and crossed off each and every name in the class, after writing the name, in a downward slant (running out of room), on one of the 28 valentines that came in the box. 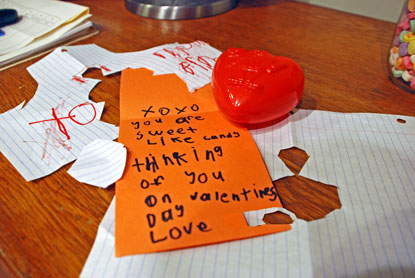 Once that exercise was done, they turned each Valentine over, and wrote their own names, right after “From.”

They were pretty quiet throughout the whole process. I imagine they spent at least 30 seconds or more for each child in the classroom, carefully creating letters in combinations not familiar to their own John Hancock’s. I imagine it was probably like writing letters in a foreign language. I’d like to think they were honoring each child during those 30 seconds or so… as each letter in each name was written, they were thinking of nothing else, except that particular person.

All were treated equally. Each one getting the same size Valentine from the box. Maybe, perhaps, there was one Valentine, that may have gotten the special treatment. Maybe they added a heart sticker, or wrote her name with a glitter pen. Whatever it was, the boys tried to be as discrete as possible. Certainly didn’t want to draw attention to themselves, for fear someone might find out.

I remember wishing Valentine’s Day occured every month, because never did I see the boys so focused on penmanship and writing and reading than any other time of the year. Not to mention their quiet focused attention, and sitting still at the table. 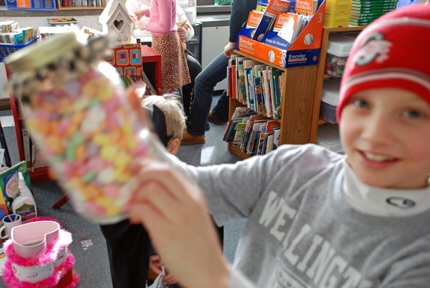 On Valentine’s Day, they would come home with their stash of Valentines that afternoon, after the school party, placing the Valentine box on their dresser, and keeping all of the Valentines, provided by each person in the class, right there in the box, on the dresser. They were never going to part with it. There might have been one special Valentine in that stash — and they could keep it, while the rest of the Valentines hid their clandestine crush.

Now, this is all over.

I can remember eventually throwing those Valentines out, sometime in June or July. Perhaps, maybe I should have kept them for their rare archival qualities.

Only The Photos I've Had Time To Take
W...
How to Roast Pumpkin Seeds
...
Fast, New Yummy Way to Cook Steak!
O...
An Entire Forest of Trees
R...
Getting What We Need: Beds and Honey
T...
Solid, Like a Rock
W...
Share on FacebookShare on Twitter
clean, holidays, Laugh, Life, memories, news, parenting
2 comments to “Without a “To” and a “From” What’s the Point of a Valentine?”