The weekend was all set. Dad was taking a few teenage boys, and their Dads, up to the lake for some winter-wonderland playtime. Ice Skates were purchased by all parties.

Then, the snowstorm arrived.

Not in time, however, to give them a snow day.

The departure time was moved from Friday afternoon to early Saturday morning at 7.

The next morning, they were off. I fell back on my pillow and collapsed. Until 9:30. Unheard of.Â  When I woke, I rented Pillow Talk, and A Touch of Mink — for later. I whipped up some pancakes for the little boys, and the neighborhood came over and they were busy building snowmen and forts. 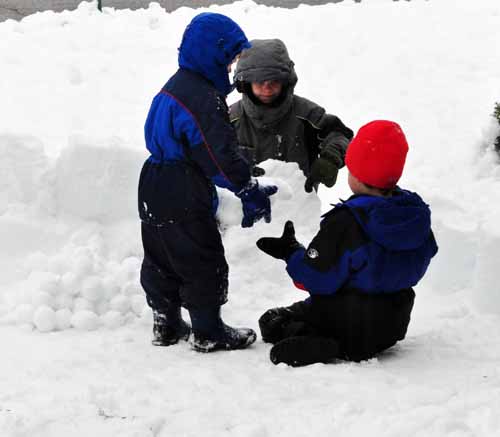 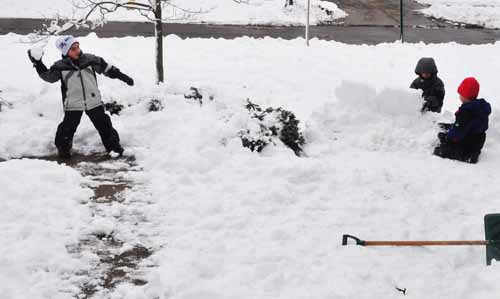 I planned to get them all to bed early and paint my toenails while watching Doris Day.

“You’re turning around? What is this? Some kind of joke?”

“We’re stuck. There are trucks all over the road, stuck in ditches, and now we can’t get the Pilot out.”

They had only driven 60 miles, and the way was paved lots of wind, drifting and snow drifts mingled right on the roads.Â  One guy made quite an impression. “He sat in the middle of the road, stuck in a snow drift, reading the paper.” In the city, where the streets are plowed almost immediately, we forget what it’s like to be in the country, and we take things for granted.

While it was the prudent thing to do, turning around, especially while out in the middle of nowhere, it just blew up my whole Doris Day weekend. Instead, we gathered together with the wives, ate the food the guys prepared, and they all talked about what “could have been.” One of the Dads, a gardener, talked me out of starting my watermelon plants so soon. “Do you have any idea how big those vines will be ?” (Really, so what if they’re big? I’ll be eating my own watermelon on the fourth. But have decided to wait a couple of weeks.)

I pinched myself, realizing now, how grateful the boys were all OK. Still, I couldn’t help but notice how this impromptu night was so familiar to those nights I spent at my parent’s friend’s house, as a child, running around in the basement — just like my kids were doing. Those nights from the past that pop into my head and visit me. Do they have a message? They are nights, I now realize, that are timeless gatherings that ease their way in to dot each generation.

All I Want For Christmas
i...
Badger Took A Beating
T...
These Boys Say the Girls Missed the Nail
S...
Without Daring to Breathe It...
S...
How High Do Planes Fly?
I...
Luminaria Run
N...
Share on FacebookShare on Twitter
Laugh, Life, the lake house
One comment to “Wimps”