Note To Self: Always add, in multiples of 10, messes to your fantasies. And, you should know this by now.

Once the eggcups arrived, they fell in love with the chicks… instantly. But of course, the felt egg chicks don’t really fit on top of the eggcups unless there is an egg inside the cup. 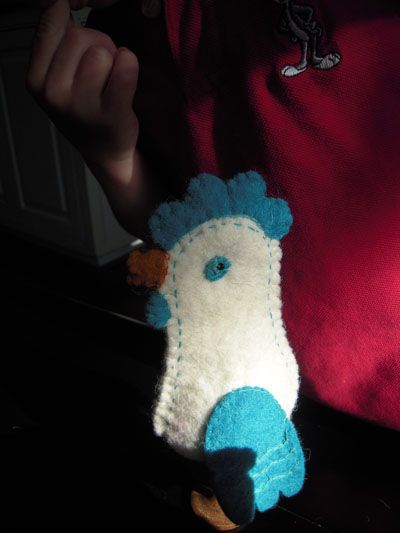 So, they pulled the egg carton out of the refrigerator, and they began stuffing the eggcups with fresh eggs. I indulged them by washing the eggs; assuming they would get their fill of egg play after a few seconds and and be off to something else. Who plays with eggs?Â  Once, to keep me busy, my grandmother set me on her porch with a bowl and a spoon and egg shells, and she told me to pretend I was cooking.Â  That lasted about 5 minutes; she gave one to my brother too, and he had no idea what to do with that.

Four hours later, my sons were still playing with the eggs. (My Grandmother could only wish that she’d be so lucky.) They gave the eggs names, and faces. No, they didn’t want me to hard-boil the eggs; cold was just fine. 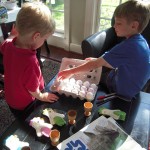 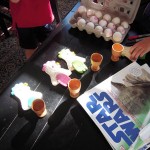 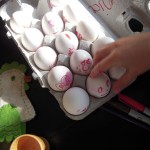 I explained that eggs need to be refrigerated. “Eggs can only live outside of the refrigerator for five minutes at a time,” an older brother warned them.

So, I suggested they use the eggs from the Easter Basket. They looked at me as if I asked them to join the National Guard.

They worked in shifts. Five minutes in the fridge and five minutes out. I could hear them through the house while I worked, “Only two more minutes before the eggs go back.” Some of the eggs were enamored with their new costumes. “Remember back when we didn’t have costumes. But my Mom sewed these for me, and now we do.” There was also a bit of sadness over the lost “general,” an egg that cracked and went to that hen house in the sky. Really, I know, I should have put a stop to this; but they were having so much dang gone fun; and I had laundry to do and packing; so I let them at it so I could work in peace.

Still, I was intrigued. I mean, they played with eggs for over four hours; devising plots, characters and subplots. Odd. Don’t you think? 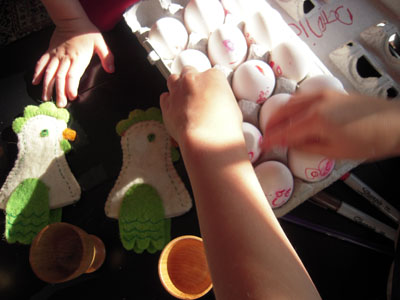 Once, in the throes of play, I overhead one of them say, “You know, we should keep playing now; because when we’re big someday, we won’t care about this egg stuff anymore.”