It sounded a bit like a Little Rascals episode downstairs. I could picture the little people in the kitchen trying to get the skillet right over the top burner. There were lots of clanking noises. ThisÂ remindedÂ me of that Katharine Hepburn movie where she cooks pancakes… making a huge mess. That was enough to put a smile on my face. They worked quietly, being careful not to fight and squabble. The fridge opened quite a bit. Dad’s flight wasn’t coming in until later that day, and the teenagers, of course, were sleeping, so it was up to these little guys, the real heavyweights, to pull off this “Breakfast in Bed,” bit.

I learned later that it went like this: The older of the two had already strategized and planned ahead. He had asked another grownup “how to cook an egg.” He rubbed the butter all over the pan – although he worried that he had used too much butter. (He didn’t.) He was fascinated at how quickly the egg “turned white.” While the egg cooked, he made the toast, leaving off the butter (to make up for using too much on the skillet). Then, he made the tea.

Meanwhile, the youngest, the baby, was watching all of this big kitchen production, wondering what he could do. “I mean – eggs, toast – and even her favorite tea?! What is left for me?! Never mind the fact that I just made her a life-size origami dress (more on that later), I have to come up with something to serve her.”

So, he remembered that tuna salad I had brought him at Whole Foods yesterday. So, he pulled, what else – but tuna salad out of the fridge. Who doesn’t think of having a tuna salad sandwich, along with their egg, for breakfast? Working parallel alongside of his brother, he proceeded to make me a tuna fish sandwich. As the final flourish, there just happened to be a bit of leftover fried kale, so he threw that on the side of the plate, like potato chips.

Throughout all of this, I did not move or stir in my bed. I just stayed put and imagined their little hands, with bodies, barely tall enough to reach the counter, cooking away. 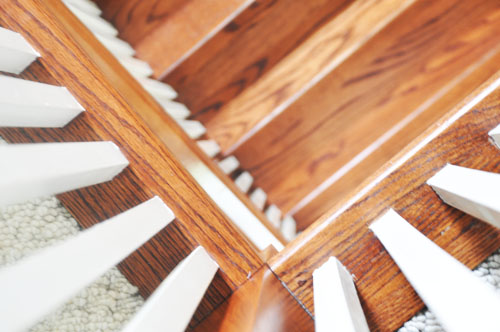 Then, they began the migration up to the bedroom. This was quite a challenge. Our bedroom is on the third floor, which includes two landings. They walked slowly. They stumbled. Â The kale, as airy as it is, had slidÂ 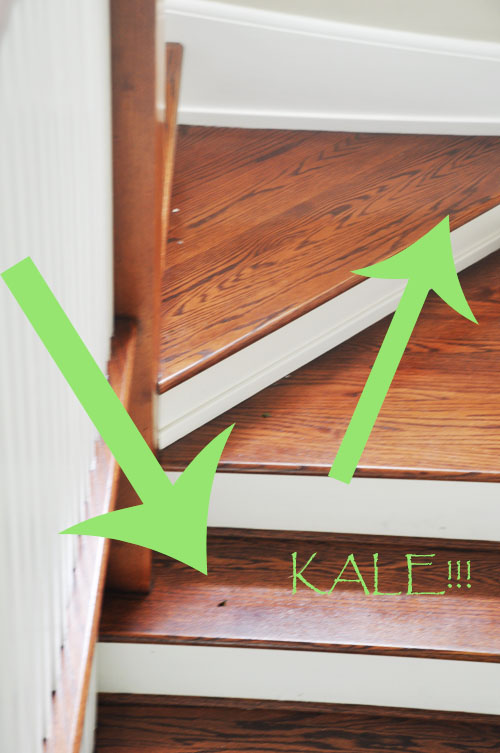 off the plate and left a trail of powdered dust all over the stairs. Fairy dust, I like to think of it. None of this even fazed them. They continued and tarried on upstairs.

By the time they made it to the top, I had, maybe, a tablespoon of tea left in my cup.

They jumped on the bed and stared over me while I ate. They gave me the “play-by-play” of all the events that happened in the kitchen…”Then, I got out the tea bag… and I put water in the tea kettle.” This was a very big deal to them. And it was — and I showed them how big of a deal I thought it was too.

I did finally catch them working on their cards. 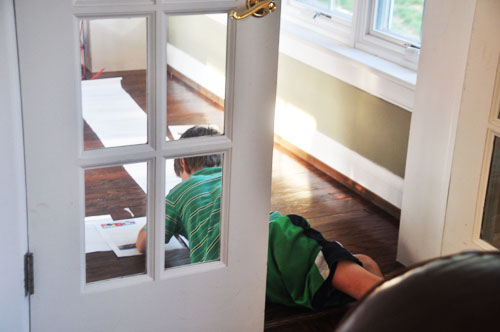 They presented me with their cards, handmade, with teabags glued on top, 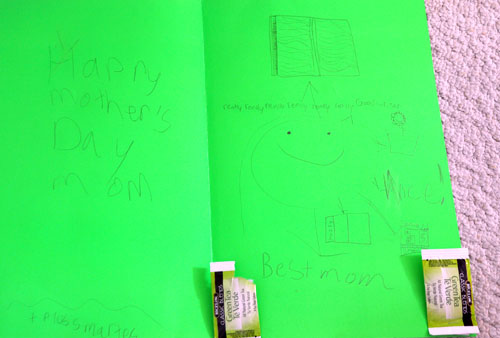 and told me all about how they had “planned this for over two weeks.” 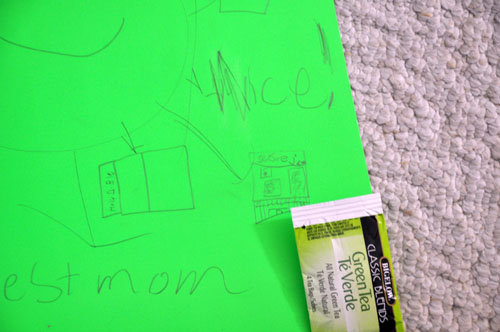 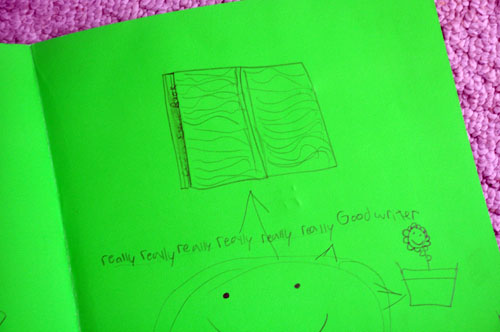 Then, the littlest one sighed, and said, “Why can’t there be a kid’s day?” 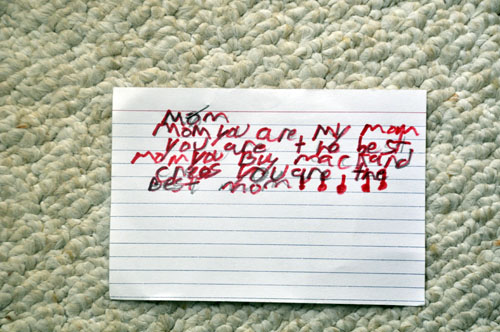 They kept waiting, watching me eat… and then, they announced that they were hungry too. Soon, I was downstairs, cleaning up their mess in the kitchen and making them pancakes. I got the kitchen cleaned just in time to make room for Daddy, who came in with my favorite goat cheeses, and wine, and made dinner for all of us.

Humor Me, and Pretend I am A Travel Writer
W...
The Myth of Advent
T...
The Shadow Who Is About To Shine
S...
No More Bootlegged Blueberries
T...
Skies are clear
T...
Note to self: 13 Reasons Not To Host a Sleep-Over
D...
Share on FacebookShare on Twitter
clean, Eat, holidays, Laugh
One comment to “Why Can’t There Be A Kid’s Day?”