When a woman marries a man, she gains an extra seven hours of housework each week. The man drops an hour. The findings are part of a detailed study of housework trends, based on 2005 time-diary data from the federally funded Panel Study of Income Dynamics, at the University of Michigan’s Institute for Social Research (ISR). Obviously, she’s doing his laundry. The new lovebirds are also eating out less, so she’s cooking.

Once the woman has three children, her household chores go up to 28 hours per week, while the man gains ten hours. (The study stopped at 3 children; but if they would have asked me, I would have told them what happens when you have four boys. The number shoots up to 1,432, exactly.)Â  Housework is defined as laundry, cooking and cleaning, and this study excluded the time moms spend scheduling doctor’s appointments, sports and play dates and keeping track of everyone in the family. But dads do much of the maintenance, yard work and car repairs, which was also excluded from the study. Yet, those tasks only took about one-quarter of the hours women spent on core household tasks.

But what about men working outside the home? That should count for something, right? Michael Burda of Humboldt University in Berlin, Daniel Hamermesh of the University of Texas, and Philippe Weil of the Free University of Brussels have analyzed data from surveys in 25 countries and found that in the United States, men average 5.2 hours of market work a day and 2.7 hours of homework each day, while women average 3.4 hours of market work and 4.5 hours of homework per day. Adding these up, men work an average of 7.9 hours per day, while women work an average of 7.9 hours per day.

Yet, mothers have not always done all the housework either. In her book More Work For Mother, Ruth Schwartz Cowan reveals 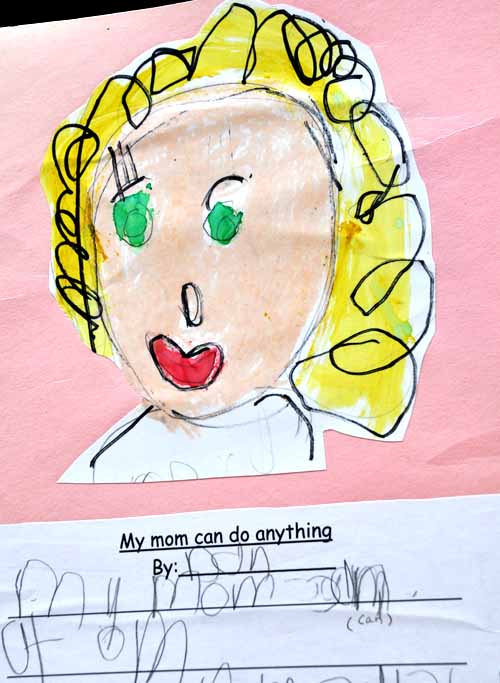 Mother’s Day Art: My Mom Can Do Anything

(and hey, you, my own flesh and blood, my eyes are BLUE, remember?)

that it was the man who once held the primary responsibility of putting bread on the table — literally. Man tilled the soil, grew the wheat and had it milled. The man grew the grain, fed the livestock and butchered the animals. Once meat was available in tins, livestock was no longer necessary to feed the family. It was the industrial revolution, really, that relieved men and children of their chores: Men went to factories to earn the money to buy the goods they no longer produced at home, (meat in tins, white flour, woven cloth), and children went to public schools. Mom was left behind, alone, with her new labor saving devices, and higher expectations to do and create more. Mountains of laundry, for example, hardly existed until factories made it possible for families to buy cloth cheap. Until then, people only owned a few items of clothing that were hardly washed. Today, we need walk-in closets to handle all of our stuff.

We never expected as much from our brooms as we do of our vacuum cleaners. Our appliances may make our homes cleaner, but they come with the accompanying advertisements, and guilt, for spotless sterile homes that hold no evidence that humans, pets or the dust of the earth has ever crossed our thresholds. It’s tough to relax among the standards the media places on us.

Thankfully, these new labor saving devices have greatly increased the cleanliness, safety and hygiene of our families. Did they really save us time? Cowan says, “Women still spend as much time on home maintenance as they did eighty years ago, with less help.”

Women today are the victims of what Sharon Lerner, author of The War on Moms: On Life in a Family-Unfriendly Nation, says moms are part of the “great sea of beleaguered and overburdened people in America—mostly women, but some men, too—stuck between the need to support their families and the desire to live a decent life with them.” She adds, “Moms do not have enough time to handle the inevitable overflow of domestic responsibilities.”

So many moms feel literally choked by our unrelenting responsibilities. Is the reason our to-do list grows instead of shrinks simply because it is impossible? Are we still living by the household standards of our ancestors, who had husbands, children, and extended families pitching in and helping with the chores? We’ve been trying to find balance all this time, and society can’t even begin to support what we’ve taken on.

A little publicized fact came out in the University of Michigan research is that while moms still carry the heaviest load of core chores, men’s housework has increased to 13 hours in 2005, from six hours in 1976. Women’s work was never meant to be a woman’s work alone. It’s nice that dads are agreeing to share in the chores, just like their forefathers did.

Eat, Pray, Starve
M...
Never Trust A Skinny Cook
N...
The Next 24 Hours are Critical
...
As If Four Pranksters Weren't Enough
O...
Correction: There is a Snow Day To Show For It
...
It's a beautiful day
I...
Share on FacebookShare on Twitter
column, news