Charlie is just one of those quirky old guys that you see all the time –walking the same route, wearing the same blue overalls. He doesn’t say much to you, he keeps to himself. He’s quiet. Never needing anything from you. Instinctively, you just know there is some benevolent quality to him — but he expects you to keep your distance. So you do. Despite his shabby overalls, he’s been known to evoke “majesty.”Â 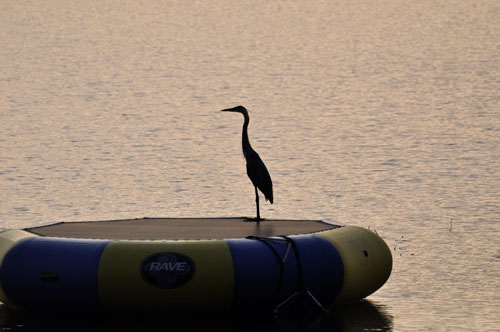 I know that really, no one killed Charlie. Charlie just died — naturally. Or maybe not. Maybe Charlie was attacked by a predator. Even through the Ardea herodias stands 50 inches tall, with an incredible wingspan of 70 inches, wolves, red tail hawks and coyotes have been known to catch the Blue Heron off guard, and make a meal out of him. 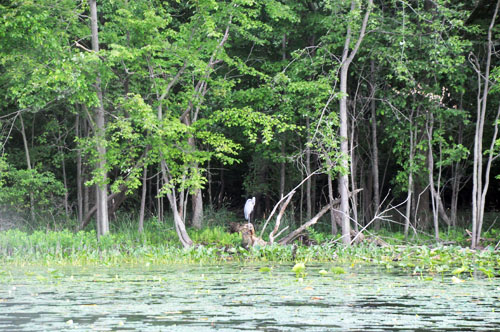 Still, the fact that Charlie was found lying on our beach, void of life, is unsettling.
Charlie is not just wildlife to any of us at the lake. He has a personality. HeÂ watchesÂ the skiers in the morning from his perch on the water. He flies by low when he hasn’t seen you in awhile, and even though he doesn’t claim our trampoline for himself as a perch — he makes sure no Seagull does either. Charlie certainly has human sensibilities.

We can’t just let Charlie die without an investigation. Sherlock Holmes-style. There must be some kind of explanation into his cause of death. Is this a harbinger of something else? When something that is a part of the backdrop of your life is snatched away, you start to question the rhythms of your life — the things you took for granted.

The boys insist that Charlie didn’t die. It might have been Charlotte, his wife. Or perhaps one of his friends that we see sometimes hanging out.

My husband was busy that day. We had just bought an Oak Tree and a Red Bud tree to plant on our property. So, now he had an extra hole to dig. When he was all done, and Charlie was buried, he looked at me and said, “Why didn’t I just put Charlie under the Oak Tree?”

I said, “You will. You will certainly dig up Charlie, and the Oak Tree and put them together. No question.”

But then, a neighbor just laughed and said, “That’s just what you say you did. So that years from now, the kids will say, ‘Charlie is buried under that Oak.'” 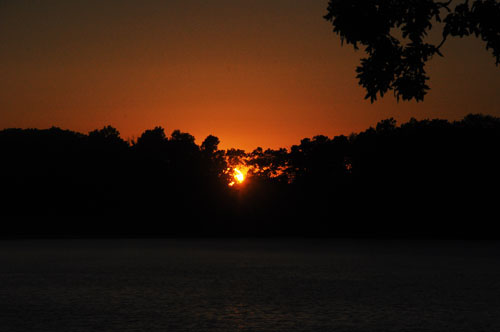 An Old Pickle Jar
W...
Pineapple Cherry Easter Ham Recipe
W...
No One Brings Class to Motherhood Like this Mom
I...
Start Building Your Advent On Thanksgiving
I...
After the Storm
Y...
I'm Giving Up Yogurt
I...
Share on FacebookShare on Twitter
clean, Life, the lake house