While driving through the roads of my hometown, the ribbons of my heart, I found it impossible to keep a safe emotional distance from the landmarks that appeared through my car window. In a flash, this monument sparked a series of Sundays, the smell of black coffee, Camel cigarettes, sun-wrinkled hands, pick-up trucks, gossip, Grandma’s noodles and princes. These storiesÂ  are missing from every guidebook that describes this monument. 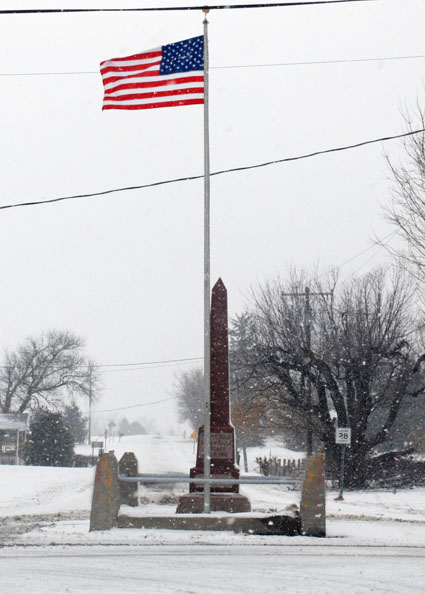 This memorial stands in a teensy-weensy town that holds an old-fashioned town hall (just like Mike Mulligan, without Mary Ann), with an even funnier name. It was the basement of the town hall where my family held its Thanksgiving reunions. My uncles carefully carried down the cookers full of baked beans, Grandma’s homemade noodles, and the turkey, pumpkin pies, ham, newly-tried dessert recipes from the backs of Duncan Hines cake mix boxes, and the fried chicken. My aunts spread out the tablecloths and food on long oblong tables, while the uncles, finished with their trips to the car and truck, sat down around the tables and began talking to one another as if they had not seen each other for a month; even though they had all met, as they did every weekday morning, at Grandma’s breakfast table for their cups of Maxwell House coffee, the previous morning. Here, the coffee was greedily percolating in a silver percolator, and a big can of Maxwell House stood ready for re-fills, while the conversation bubbled just as easily.

While the aunts (the sisters) worked, there was an undercurrent of gossip that controlled the position each woman took behind the food prep counter. Certain sisters would not tolerate the presence of another, and this person rotated with the week. I strained to hear the whispers, and when I couldn’t hear clearly, I simply asked, “What did she say?” Then, my Mom told me to hush. Then, I would stare at the marked woman and wonder whatever thing a grownup could do that could be so bad.

For reasons that I am still unable to comprehend, this day held promise, and eased longings for yearnings I can no longer recall having. To my heart then, the upcoming day held all the appeal as a trip to a cotton-candy-laden circus. Maybe it was the unlimited access to the kool-aid spigot that flowed freely into my cup all day; or the presence of my cousins, all in once place, who were already in high school, who lavished me with attention, and never tired of playing silly games like “Who’s got your nose,” that made the time I spent here so enchanting. They made me feel important.

A few uncles smoked their Camels, filling the room with what we would today call that “appalling second-hand smoke.” No one even thought to be bothered, then.

The day lingered well beyond lunch. Once the plastic dinnerware, which each family brought in their own paper grocery bags, (ours, avocado green), was cleared, the grownups moved from table to table, mingling with their sisters and brothers. They conversed eagerly, as if they had new news; when, of course, many of them had already shared the latest on their telephone’s party lines with each other the night before, or even that early morning.

More fodder was collected for the sisters’ rumor mill for the week, as whispers and judgments were passed between them. The uncles, the brothers, never did this, and equally, had not an unkind word to share about their sisters.

As the day wore on, my Dad used to hold court with the cousins, who always invited a carload of boyfriends and girlfriends. We all sat in gray metal chairs that we lined up in a u-shape, playing “Who Stole the Prince of Wales’ Hat.” The idea of playing such a “royal” game, in such a judicial setting as a town hall, always charmed me. My Dad was the only one of us who could talk fast enough, and had the mental stamina required to remember which number belonged to each person: He would say, “Who Stole the Prince of Wales’ Hat? …Number 17 you took it. No, Number 17 didn’t take it, who took it? Number 8 you took it,” and so on until he would announce, “Number 21, go to the foot.” And we’d all have to move, but keep our numbers; which we were required to remember.

My cousin from Bowling Green College introduced us to “Bing and Bong” which we played with a ping-pong ball, still maintaining our u-shaped chair formation. The aunts and uncles watched, and laughed, completely engrossed as if they were watching the $10,000 Pyramid on TV.

The leftovers were re-heated to form our supper. The fluorescent lights on the ceiling beamed down its greenish glow as some of the cousins went upstairs, and outside, to throw the football. I never went outside. I always hated to be cold, and would not look at the monument again, until we were driving away in our car, the monument then illuminated by the moon in the darkness of the day that had lingered well-behind our early lunch.

Not a soul from my family will be found here ever again; despite the closeness and laughter that my cousins shared here, none of them reconnect in the way that they once found so carefree and easy.Â  The monument still stands here, unchanged, with its flag blowing in the wind amid this bitter winter storm, while my memories have seamlessly been born and extinguished in one easy breath. I’ve learned that all mourned memories like this must have their space; a moment of quiet recognition before it can be released, and I can be free. Now that I’ve purged this memory, that flashed in an instant, I can take the time to read, and ponder, as a tourist would, who is Forest Dubbs? His immortality seems to have outlasted us all.

Popovers Give Leftovers a Fresh Start
T...
Musings that stir a wild man's heart
...
13 Remedies I've Used At the Lake House, 8th
...
The Gift One Cold, Rainy Day Brought
I...
Brownie was loved
...
Work at the Lake House
...
Share on FacebookShare on Twitter
Life, memories, Tears
One comment to “Who is Forest Dubbs?”