I could hear him coming up the stairs before I saw him… his breath heavy and panting. A chase had been ensuing outside, and I figured he was coming inside for safety — as the inside of our house is out-of-bounds for the neighbors. Then, I heard him mumbling something… “this is going to get me a pack of nerds for sure.”

Then, I saw him, his arm outstretched to reveal a tulip, crumbling under the weight of the squeeze, the petals barely able to keep themselves part of the original stem. “Here,” he said, as he handed me the tulip. and as I pretended not to notice that it was already falling apart.

The pack of Nerds were bought on a whim a few days ago, as a sort of half-attempt to garner the kids to do some extra work around the house. “If I catch you doing something nice, or extra, I’ll give you the nerds.” Immediately, the boys went to work taking bowls, cups and leftovers out from under me as I was simultaneously trying to do what I’m always doing,Â  emptying the dishwasher and loading it at the same time. Never had I seen any of them (the 7 and 9 years olds)Â  so astute to what my duties really were. They could run this house without me in it, I’m sure. This, I would have have known, save for the Nerds.

The Nerds appeared in my cart because my little boy called me on my cell phone while shopping to request them. “I need them for school,” he said. 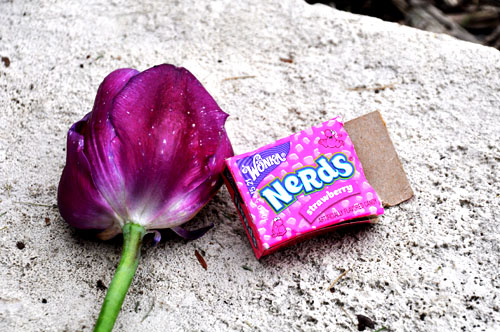 Without questioning, I picked them up. Upon further investigation, I learned that he really didn’t need the Nerds, he just wanted to have them available to his teacher in case she ever ran out of “rewards” in her candy jar. So, stuck with the Nerds, I ended up devising my own little reward system. And that’s how I ended up with a broken tulip in a vase on my counter.

Update: The New Brain Food: How To Make A Perfect Bird In A Nest:
"...
The Visit
...
Gratitude Blooms in Stillness
W...
Robot In Progress
"...
What summer does to brain cells
T...
Dinners We Can Eat While the Kids are Away At Camp
B...
clean, Laugh, Life