A quick 20 minute run seemed like a great way to kick-off a chilly, yet gorgeous, fall morning at the lake.

Running is monotonous and boring.

I ran past a grove of Hickory Nut trees. Their nuts scattered across the road where I ran. I doubt that my boys know the exquisite taste of a hickory nut, so I grabbed four. The extra weight of the nuts is a bonus; now I’m running with weights. We’d use a hammer to open our meaty treasures later. As a kid, I used to do that with my brother, trying to strike the nut “just right” with the hammer so that we could pull one complete half of the nut right out of the shell, without the need to dig any stuck parts out with a crochet hook. Like Grandma did.

Soon after that, I encountered three snakes, smashed along side of the road during my run. I thought about taking the snake skin back as a souvenir for the boys, but thought better of it. I could embellish a snake story that would be far better than the actual snake skin.

As I was coming around the last stretch toward home, I was tired, and ready to move into a nice brisk walk. Instead, I pushed my heaving lungs and legs and kept going with every last ounce of endurance left in me.

I ran past a farm house, and a pit bull dog came charging out from behind a farm house, barking and running, at me. Surely, there is a chain attached to that dog? I don’t think so because that dog is right on my heels and he’s on the road.

And lookie here, he has a friend. A second pit bull dog has now joined us. They are relentless, and even as I past their property line, the dogs are showing absolutely no sign of stopping. The dogs have no boundaries.

I imagine my ankles cut and shredded and bleeding at the mercy of these pit bulls dogs. You would have never guessed, if you had been watching me, that I was ready to just putter out and quit just a few seconds before. Because, now I am running so fast.

Finally, I have out-run the dogs. I can’t hear them anymore, but I’m afraid to stop and look back. So, I keep running until I’m back home. Safely. I think about sending the dogs a thank you bone — you know, for making me run so fast and burning so many calories that I can maybe enjoy an extra piece of pie this thanksgiving. 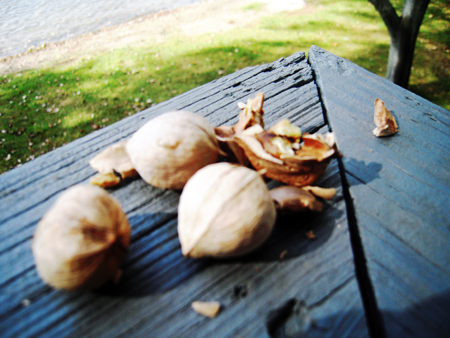 Maybe, it will be a Hickory Nut pie.

The Great Puzzle Relay Race
B...
Easiest Baked Egg Rolls You'll Ever Make
Y...
What To Get a 21-Year Old, And His Friends
H...
Garden Failures, So Far
...
If It's Important Enough To Whine, Cry or Tattle About: Give Me 50 Words
T...
One More Way to Eat Zucchini
Y...
Share on FacebookShare on Twitter
Laugh, Life, the lake house
4 comments to “Running with snakes and dogs”