So, all the boys signed up to do the turkey trot. Five miles. They all want to win, of course. And one of the boys found some documented, scientific research validating that athletes can improve performance by 3% by drinking beet juice. One boy is adamant about winning. And I’ve got no shortage of beet juice — I have turbo-charged beet kvass. So, the competitive one, has for the past few years, has gulped down a few sips of beet kvass a few times each year for big sporting events. He’s pretty picky when it comes to food, so it’s quite a statement to the faith he puts into the kvass for him to actually drink this stuff. 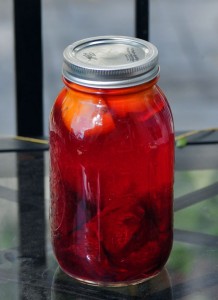 But this time, the stakes were a big higher — and I warned him a few weeks before the race that might be best if he drank it for the entire week leading up to the race, rather than just trying to cram it all in the night before the race — but to no avail.

But, as he was drinking down his glass of juice that morning at 6:50 am, he looked at the research again and realized that it actually said to drink 500 ml, and he was only drinking like 60 or something. So he decides, the morning of the race — this picky eater, to drink 500 ml of beet kvass. He’s so picky, I can’t even reason with him that no, drinking 500 ml without any preparation is a big mistake.

By 8:15… he has diarrhea. He has nothing left in his stomach, and I have a mess all over the bathroom. He looks at me like, what am I going to do? I have absolutely nothing in my stomach. And I said, then you can’t race.. you’re sick. That’s clearly not an option for him. I’ve never seen such determination in the face of such human agony. So I convince him to drink some whey protein… but even in the car driving to the race, he’s not sure if he’s going to be able to hold himself together. We walked to the start line, pass the port-a-potties, and he looks at me, and I’m holding my breath wondering what he’s going to say next, and he says, “Look at that long line….” But, he keeps walking toward the start line.

To make matters worse, the race starts 15 minutes late, and the whole time I’m thinking how this is adding to his agony — he just needs to get this over with….

And the good news is he finished in 33 minutes… no accidents! And he did beat all his brothers, and everyone won a pie.

I Can't Do This To All My Soap...
N...
Peace in the Afternoon
W...
Jockeying for Presents
...
You Have To Be Really Careful Around This Curve...
T...
Pineapple Cherry Easter Ham Recipe
W...
Daylilies With Mushrooms and Creamy Pasta
B...
Share on FacebookShare on Twitter
clean, Laugh, Life