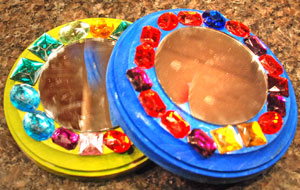 This best shot is a Sun King Mirror, which we made during our visit to the art museum to see Great Expectations – Aristocratic Children in European Portraiture. To a real mom, the portraits of Louis XIII of France, Louis XIV of France, Charles I of England, and Charles II of Spain display a baffling era when children played a heavy role in the country’s kingdom, diplomacy and bloodline preservation. Girls were forced to marry and bear children at early ages to forge a protective bond between kingdoms. These children wore heavy robes, jewels, feathered gold-rimmed crowns and amulets, to protect them from harm. I’m sure these heavy garments made it tough for the miniature royalty to run around, climb cabinets for the good stuff, and catch toads. 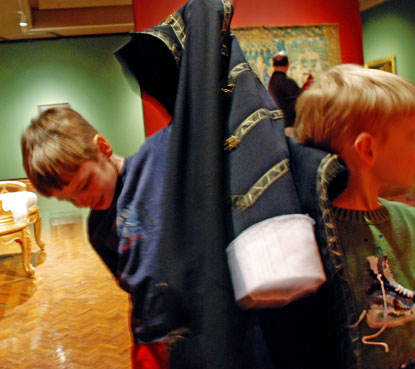 As I struggled to keep my older boys engaged in this most “boring” of endeavors, looking at art, while preventing my four-year-old from depositing the oil from his fingers on the priceless artwork, I read about the five-year old who became King.

Horror instantly filled my mind. What kinds of tragedies would befall a nation if one of my children, at the age of five, were forced to be King? My kids, and as it turns out, Louis the XIV (1638-1715), did run France into the ground. The real tragedy, I later discover, concerns the control-issues this kid-king had over the the royal bathtub.

Born September 5, 1638, King Louis XIV, also known as King Louie, was the official King on May 14, 1643, a few months before his fifth birthday. Of course, he did not have total control until he was 23, with the death of his First Minister, the Italian Jules Cardinal Mazarin, in 1661. Still, don’t you think this tiny kid-king wielded consider power over what came out of the royal kitchen?

King Louis was also known as the “Sun King” (Le Roi Soleil). Like all narcissistic children, King Louie believed the universe revolved around him. So, he believed that just as the planets revolve around the Sun, so too should the people of France and the Court revolve around him. The Sun King’s mirror is a symbol of King Louie’s Hall of Mirrors that he had built in the Palace of Versailles, which the King transformed from what was once an old hunting lodge. 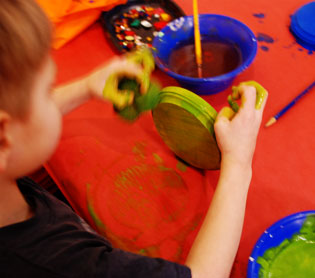 The hall of mirrors features seventeen mirror-clad arches that reflect the seventeen arcaded windows that overlook the gardens. Each arch contains twenty-one mirrors with a total complement of 357.

So, what became of the country, ruled by the child King, who had immense wealth at his disposal and commanded the mightiest army in Europe?

Does anyone find it a bit ironic that after living a good, long life of 77 years, King Louis, the child King, died of smallpox? 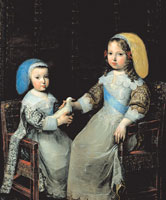 King Louis XIV, with his brother.

Houzz Idea Books
d...
Speed up... No, Slow Dowwwwwn
T...
The Year of The Ottoman
T...
So, When A Reporter Is Coming To Your House
a...
By car, it would take us 11 hours
...
Happy Birthday, little one
...
Share on FacebookShare on Twitter
best shot, clean, Laugh, Life, Science
11 comments to “When a Child Becomes a King”