This weekend, we pulled out the dust-covered, felt-covered football stadium my son created six years ago as part of his biography project. Before he took it to the curb, I asked him to leave it on the dining room table so that I could take a photo of it.

“You already did that mom.”

“No… I didn’t have this camera back then.”

I stalled to take the photograph, knowing that once I took the photo, there would be no more reason to keep his work around. I remembered how long and hard he worked on this project — the time we spent together at Joann’s picking out self-adhesive letters, felt, glue sticks for the glue gun and paint to complete the project… and the day he actually played hookey from school so he could finish his project. Just couldn’t bring myself to throwing this out, even though it has no useful value.

As I took the photo, I remembered how he creatively used pennants to showcase the subject’s quotes (a necessary part of the project’s written assignment part of the grade.) Words, quotes from a man’s life resonate with me the way no image can. Here, I remembered how the quotes my son chose paint a chilling, portrait — almost foreshadowing a character, the way Shakespeare did in Macbeth, of this man’s future. And my son, at the age of 9, could barely comprehend what he was “painting” in his portrait with these quotes.

“I don’t motivate players… I get them to motivate themselves.”

“I believe in over-learning. That way you’re sure.”

“I just can’t control my temper.” 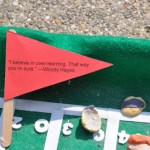 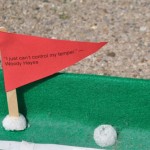 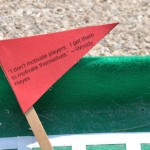 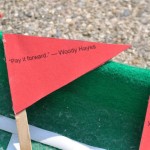 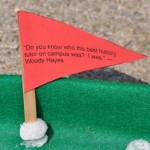 The man in question was Woody Hayes. A man who was fired from a job he treasured, simply because he just couldn’t control his temper.

I am not a football zealot.Â  Yet, while my son researched this man’s life, I learned some beautiful things about the human spirit. Woody Hayes, despite his faults, and despite the many enemies he had, cared deeply about his kids. More than teaching them to play football, he wanted them to be great people.Â  He taught them to give back to the community by giving back to the community.

More than teaching them to how to play football, he wanted each one of his players to realize how providential their lives were — each one of them, no matter their background. Each one of them had an obligation to give back to someone else… someone future, not from the past. “Don’t bother to pay me back, give it to someone else who needs it, and let them pay it forward to.” No one was a victim. All of us have something to give back. After coaching games, Woody would visit kids in the Children’s Hospital. 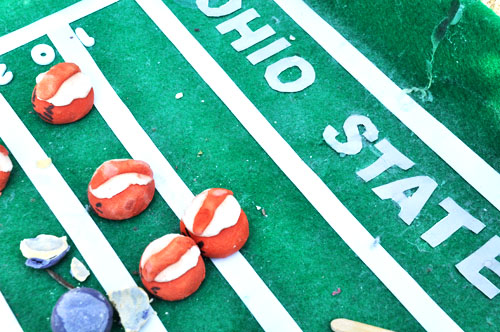 Hayes enlisted in the United States Navy in July 1941, eventually rising to the rank of Lieutenant Commander during World War II. He commanded PC 1251 in the Palau Islands invasion and the destroyer-escort USS Rinehart in both the Atlantic and Pacific operations. Once out of the Navy, and running his famous football plays,Â “three yards and a cloud of dust,” he found other ways to serve the country. For example, Woody walked each day to his job at OSU to do his share of energy conservation during the energy crisis of the 70s.

With great pain, he left the OSU locker room , after being fired for punching a player at the 1978 Gator Bowl.

“In football we always said that the other team couldn’t beat us. We had to be sure that we didn’t beat ourselves. And that’s what people have to do, too–make sure they don’t beat themselves.”

I know he punched the guy… I know he deserved to be fired. But, I can’t help but tear up when I see that feeble man, humbled by his experiences, walk up the podium at the 1986 OSU commencement speech, knowing his heart is jumping around like a little boy, speaking these words:

Graduates, Mr. President, faculty members, friends and families of the graduates who have done
so much to make this possible.Today is the greatest day of my life … I am so grateful and so appreciative to be here today, I just can’t tell you how much.

Here is a man torn between his inability to shrug off how much he is savoring his own moment, like a little boy. He knows how much he savors this moment… because he lost so much. Yet, he can’t miss, and he doesn’t, the opportunity he’s been given, his obligation,Â  to throw out these bits of wisdom to the kids he loved:

“In football we learn some wonderful, wonderful things. And one of them is this: When you get knocked down, which is plenty often, get right up in a hurry, just as quick as you can. Do you know what to do then? You probably need more strength. Do you know where you get it? You get it in the huddle. You get it by going back and getting a new play and running that same play together with your teammates. That “together” is the thing that gives you the buildup to get ready to go again.

In your lifetimes, you’ll find that how well you can work with people will depend on how quickly you can get back to them and get together.

… you’ll find out that nothing that comes easy is worth a dime. As a matter of fact, I never saw a football player make a tackle with a smile on his face. Never.”

The garbage man is coming today… the football stadium box is still on my dining room table… maybe it will make it to the curb, next week. 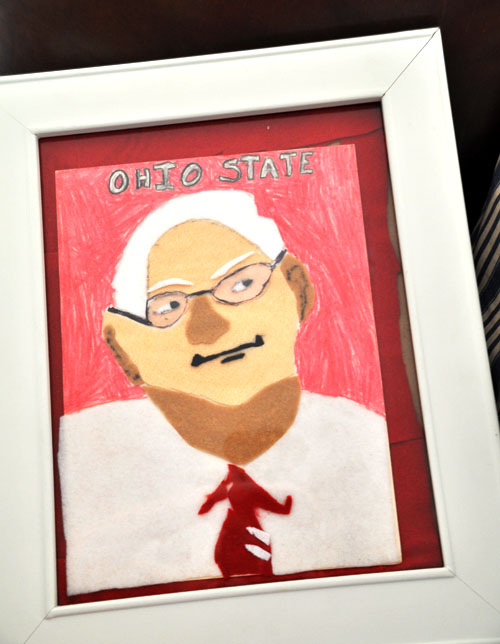 Felt portrait of Woody Hayes by my son, six years ago. Framed, hanging on a wall. One item that will not be making its way to the recycling bin.

11
E...
I used an iron to feed my kids
N...
The National Park: Your No-Fuss Backyard
...
He Has Fans: Update
T...
Mission for Today: L Train to Brooklyn
I...
Joseph Hurried Out and Looked For Place to Weep, and other great stories to share
"...
Share on FacebookShare on Twitter
clean, Life, spirit, sports