I’ll do anything for some peace and quiet right now… even if it means hosting a slumber party in my room, just to settle everyone down. I’ve learned never to volunteer for that one field trip, an hour away, where everyone who drives separately gets lost. (No one pulled in after me; I checked. I came in last place.) Especially, do not volunteer for that field trip when you’re due to show up at school later that same afternoon for a special kindergarten open house. But hey, who’s watching all of those details? I’m certainly not; I’ll probably forget and do the same thing next year; again. And, I still won’t know how they get cider out of an apple. 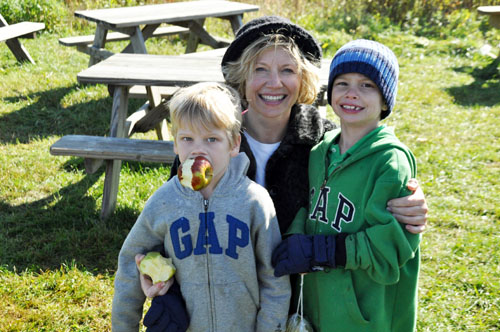 Without my staid, boring, monotonous routine, I’m lost all day long… like Cinderella looking for her long, lost slipper. This manifests itself in many ways; like suddenly deciding that 3:45 is the ideal time to reorganize the kitchen. (It does look much better, thank you.) I may have remembered my son’s 4:30 soccer practice, but I failed to compute that I would need to leave by 4:20 to get him there on time. Throw in another 6 p.m. soccer practice, and you’ve got yourself a fine and dandy sock fight between two brothers, who both insist that the other one has their sock. The tie breaker walked in at 4:30 after his soccer practice, and we confiscated one of his socks.

Speaking of which, I don’t know how I ended up with so much soccer in our family. We didn’t really plan it out like this; it’s just that soccer involves a lot of running, and that’s just what’s available in the fall. For some reason, football has lost its luster; but that could change any year now. 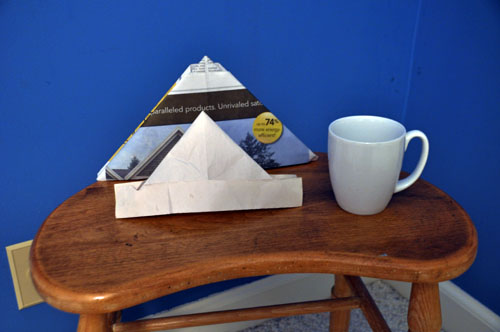 So, after we tore up the Wall Street Journal making the ideal “hat,” we read our stories, and I went off quietly to immerse myself in yoga, so that I can find out who I am underneath all of this doing. But, tonight I have some company. The hats are in place, along beside the “I’m thirsty” cup. 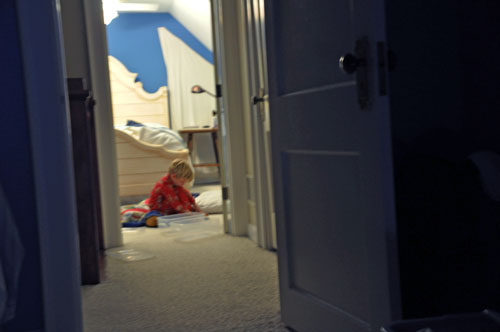 He spread himself out,stuffed animals and all, for a slumber party in Mom and Dad’s room.

I Wonder if Angels Really Are As Tall As Skyscrapers...
I...
The day Snickerdoodles became a food group
H...
Squeezed, Pressed and Susatained
I...
What Moms Don't Tell
H...
Peace in the Afternoon
W...
Baby It's Cold
&...
clean, Laugh, Life
3 comments to “Weeknight Slumber Party”