Several years ago, I was entranced by the whole Key Hole Garden concept, used in Africa, and its importance in helping people living in areas with little water to create a sustainable garden. However, I have had the supplies/time/manpower to create my own. But the idea of putting vegetable and fruit scraps directly into a tower, where the moistureÂ and nutrients are readily available to plants immediately has always been intriguing and satisfying to my curious mind.

Last winter, I tried a technique that I learned from a friend — burying my compost directly in my garden. All winter long, I saved my compost and buried it in holes I had pre-dug before the ground froze. After the vegetable and fruit scraps were in the hole, I used the piles of dirt to cover the scraps, which eliminatedÂ any odors and kept the rodents away. Burying the compost, directly in the soil was quite liberating –no more trying to figure out what the right proportions are of green and brown organic matter, and no churning. The compost quickly became less of a vegetable scrap, and actually part of the soil – almost within a few days, even in the winter.

I was not prepared for the abundant, rich results of this simple tactic. 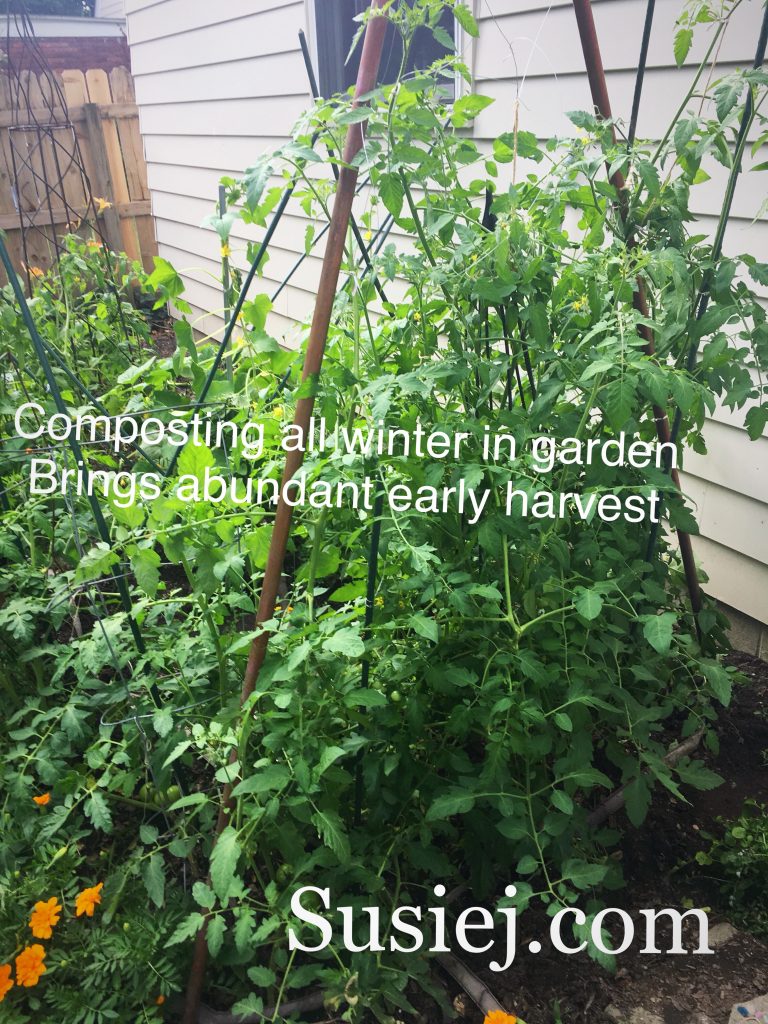 The result, I found, this spring was very crumbly, rich soil in my garden, along with some “volunteer” plants that had already taken off and were growing quite well from whatever “seeds” were in the compost. It’s night as I write this — so I can’t run out and take a picture of the pumpkins that are growing like the Jack and the Beanstalk vine. I had so many pumpkin (or are they butternut squash, or cantaloupe?!) “volunteer” plants that came up that I gave some to friends, and I transplanted many of them and have them crammed into every spare corner I could find around the yard and garage These unplanned vines are thriving, unlike anything I have “purposely” planted.

But I did take a picture of my tomatoesÂ  — which are planted in this nutrient-rich, moist soil. This picture is from over two weeks ago, and I have never harvested tomatoes this early or had plants this healthy and thriving so early in the season.

So, after realizing the benefit of putting compost directly into the soil, I wanted to learn more. And I saw a video on YouTube called “trench composting.”

This was it – the idea I’ve been searching for. While I may not have a traditional keyhole structure for my garden, I can still give the plants, which are planted in traditionalÂ rows, a healthy dose of “wet compost” that they can use right now.

This is a real problem solver — one of the biggest problems with my garden at the lake is that the soil is sandy, and there are many days when I’m not there to water the garden. Yet, I do love to grow things there, because of the wide open space I have — and the moist air just seems to grow sweeter vegetables. 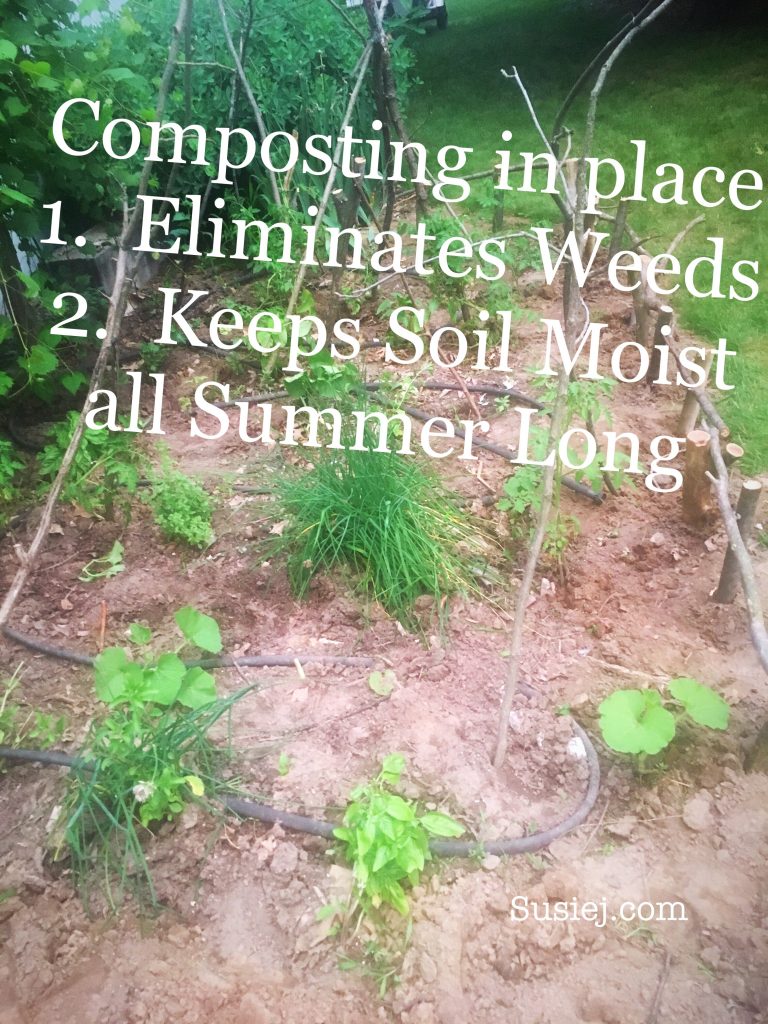 Last week, after learning about trench composting, I buried all of my vegetable scraps in “trench rows” right alongside the vegetables. I don’t think I’ve ever had such a “neat” garden, with minimal weeds, because every day I’m out there with a hole, digging a trench, and pulling up weeds simultaneously. If you are not composting, you may not think you have much to offer, and it’s not worth the effort — but once you start collecting all of your kitchen scraps, you start to realize how much you really do have. I buried watermelon rinds, banana peels, the tops of strawberries, potatoes peels — SO MUCH STUFF accumulates so quickly. All of these scraps are made up of lots of water!

I can’t describe to you the amount of satisfaction I felt burying this compost in this sandy soil, knowing that these plants would continue to provide moisture and nutrients to my plants after I was gone.

And, while I was there, we trimmed some branches off a tree — and after a relative did such a nice job of trimming them into firewood, I asked if I could use them for my garden. I used fishing line — all that was available to tie and reinforce and stake the entire border. It took some time… but I was actually mesmerized with the audio version of The Boat Runner, and it was a nice little way to get away and do something constructive. 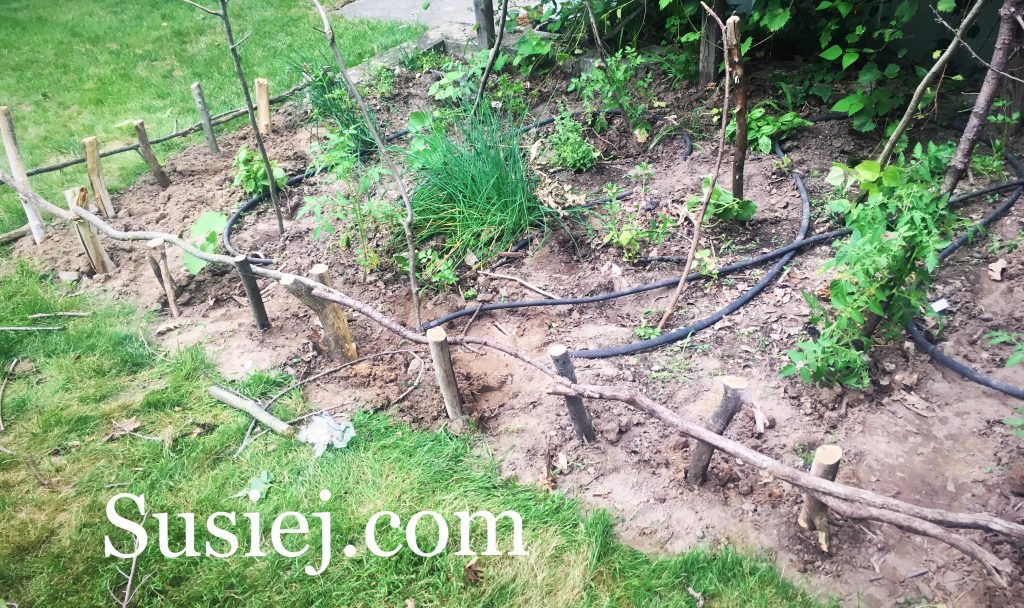 The result was a “cute” border, that will probably do very little to keep out the rodents — but it’s cute, all the same.

I made “tee-pees” to stake the tomatoes from the broken branches I found lying in the woods and knotted them together with fishing twine. 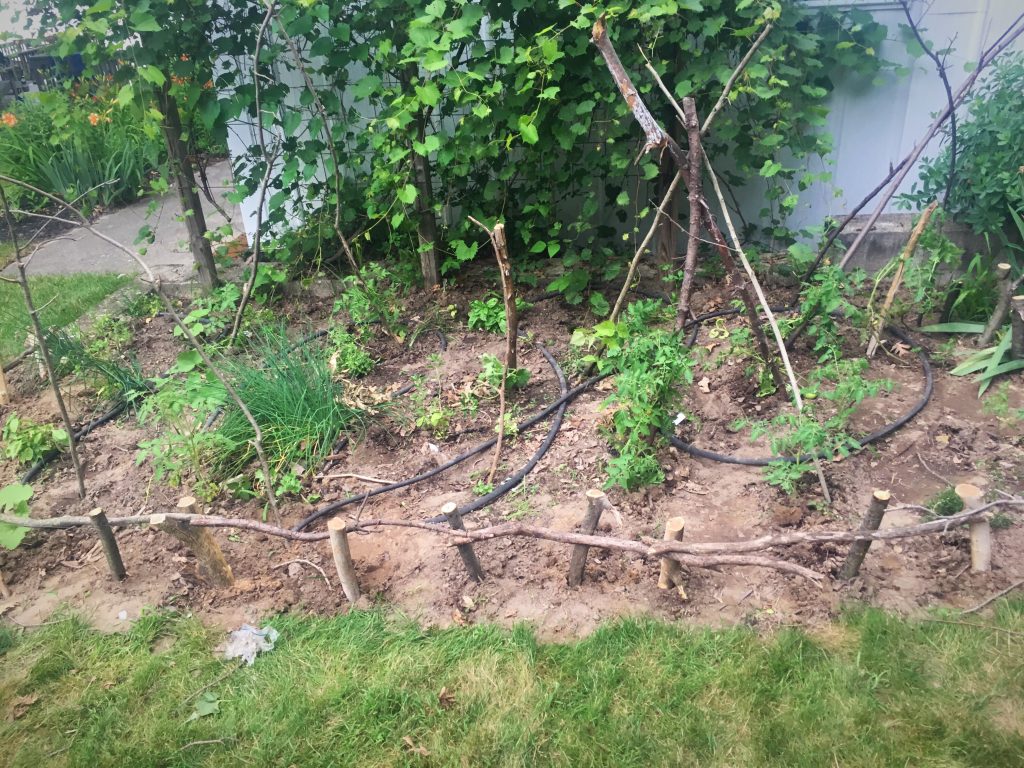 I feel like the richest man in Babylon with my new-found garden tip. Rich, moist soil, even in the heat of summer, and plants that are thriving.

Clever Transition
F...
Burdock Root and Root Beer
I...
Delicious Fluffy Protein Clouds, For Crazy Busy Days
I...
Finding a Way to Make My Eyes Twinkle
I...
To Curl Up With Perry Mason
T...
Time makes a toy cool
M...
Share on FacebookShare on Twitter
Gardening, Life, Make Something, the lake house, Try This