Lately, I can barely stand to be in the same room with him. I forgot this when he asked to come home for lunch today. Between bites of leftover pizza and sips of chocolate milk with whipped cream, he conducted dueling Lego Bionicle battles with his brother. Between battles my 8-year-old talked about days that seem to go fast and days that seem to go slow, and wondering why days “seemed to go so fast when he was in kindergarten, and now they don’t.” 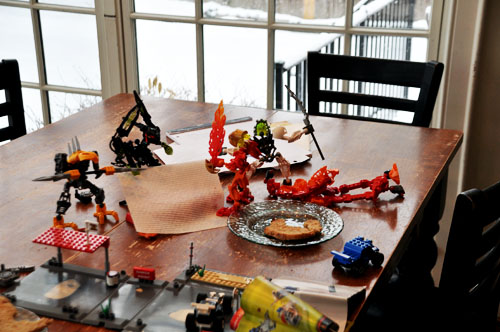 “Today will go fast, because I came home for lunch.”

He wants to know what time it will be when it’s 10 O’clock in California.

“So that you can call Lego Headquarters to find out how I can get Toa Mata Nui.”

Since before Christmas, he has wanted Toa Mata Nui (#8998)– a Binoicle Lego refuses to re-produce, despite the high demand for this chunk of plastic, and precisely, because of its high demand. Tau is now a coveted collector’s item, sealed in boxes, not for play. Not for imaginations. (Why hasn’t the management of that company been forced to watch Toy Story II?)

As time went on, I believed, his passion for the toy would fade. In contrast, time has fueled his passion; he wants precisely what he cannot have. This unfulfilled obsession is not fun to watch. I can hardly stand to be in the same room with him. To stand helplessly and watch, knowing there is nothing that can be done. Knowing, inside, that nothing should be done. Even when I am not with him, Tao Mata Nui haunts me. While watching, The Bells of St. Mary’s, a grown man looks back on his childhood to reflect on one of his greatest moments, which was getting exactly what he wanted for Christmas. A fate my son will be able to say with certainty did not happen to him.

Lego, when you mess with the desires of 8-year olds, beware that you are really messing with broken hearts — blood I certainly wouldn’t want to have on my hands.

Now, I have a phone number to look up.

How I Ended up With Two Birthday Cakes... and only got to eat one
T...
Lights Out
I...
Productive
D...
His first big game
Just Letting It All Unfold On Its Own
...
A Box Is Really Just A Castle Yet Undiscovered
I...
Share on FacebookShare on Twitter
clean
7 comments to “Unrelenting Passions”