Not only did I overhear my kids talking about the pot of gold that was going to show up on St. Patrick’s Day (as it does every year) but I also learned from them that there was going to be an actual Scavenger Hunt to find the gold. Please.

Lifetimes are made up of the little things. But a Scavenger Hunt? That’s not just a little thing. But listening to those voices in my head repeating the words “it’s going to be so eggciting…” I had no choice but to start my clandestine efforts for the treasure. The pot of gold would be simply, chocolate coins. Except the store didn’t have them. The shamrock cookies I made, of course, were too sticky and gooey to cut, so I picked up store-bought shamrocks that looked better than anything I could have made. Snicker mini bars, wrapped in gold foil, and Hersey Almond Kisses, wrapped in gold, were added. (Thank you for that!)

A shinny metal bucket was stuffed, and the rest of the cookies and candy were hid in the oven to avoid an afternoon sugar-high.

The scavenger hunt clues?Â  Surprisingly, the clues did come easy. I thought about how to make them move from outside to in, into different floors. Figuring out how to get them there, turned into a chain of memories from the year that touched each one. Post-It notes were the perfect, stick-on medium. 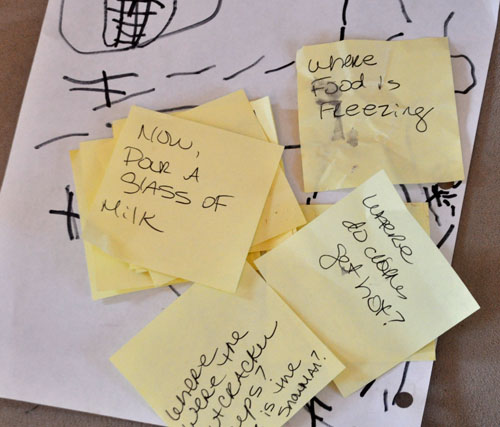 Where food melted because someone forgot…

(The freezer in the basement that was left open by accident.)

The first place you head to in winter mornings, hoping for some warm socks.

(The hot register threw them off… but it was actually the dryer.)

Now, take these to your room while you wait for your older brother to get home.

(Great way to incorporate a chore!)

The next clue was in the hallway outside of their room.

Where you tried to touch wire.

(They couldn’t figure this one out. That’s when they got the paper and started marking up the clues and making a treasure map. Finally, my oldest son came home and he was the only one who knew this one. When we first moved here, he thought it would be cool to stand on the roof of the tree house and try to touch the telephone wires. He didn’t.)

The smelly place where I once held office.

(Our mudroom is actually my old office space.)

What code was created on a cold icy day?

Now, pour yourself a glass of milk, to get ready.

(No one bothered to take the time for that. They just pulled the clue off the milk.)

Where are the snowmen?

(Not those. The ceramic snowmen are still sitting in the hutch.)

And, there, in the waning glow of the afternoon sun, there was the pot of gold. 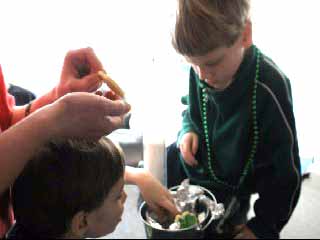 Now, they tell me, this is how they want to do Christmas.

Later that day…
I preheated the oven to 450 to make baguettes for dinner. There was an awful smell. It was, of course, the bags of snickers, kisses, and cookies in the plastic store-bought containers, melting all over the oven racks.

Stars Don't Stand Still
S...
Then, we were stranded on the lake
T...
Why Can't There Be A Kid's Day?
I...
Plenty of Room At The Inn
A...
Over the Bridge
T...
What To Do with Newspaper Route Money
A...
Share on FacebookShare on Twitter
clean, holidays, Laugh
8 comments to “Twisted Path to the Pot of Gold”