My first introduction into gardening was by my mother, of course. I was less than five years old the morning she dedicated a 4×4 square plot of our yard to me. “This was my very own flower garden,” she said. The first plants we planted were Morning Roses. Not really roses, as they had fern-like leaves that looked, at first, as if they might be sharp, but were actually quite soft, yet sturdy.

Morning Roses open only in the morning. Four o’clocks open in the afternoon. Moon flowers bloom at night. Enchantment is the only word to describe the feeling I had about peculiar flowers that followed the tick of a clock.

In 1751, Carolus Linnaeus had a similar vision. He hypothesized a Flower Clock garden plan that would take advantage of several plants that open or close their flowers at particular times of the day to accurately predict the time. He called it the Horologium Florae. Several botanical gardens attempted the idea in the early 19th century, with mixed success.

“Many plants exhibit a strong circadian rhythm, and a few have been observed to open at quite a regular time, but the accuracy of such a clock is diminished because flowering time is affected by weather and seasonal effects.

No one can precisely capture the bloom of a Morning Rose.

During a recent visit to a museum with my son, I stumbled upon this intriguing piece of art, by Brandon Antczak, 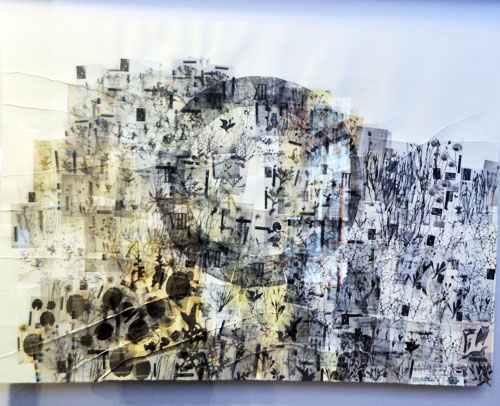 who attempted to capture what Linnaeus was also unable to capture in real life, onto paper.Â The piece exhibited is titled Mr. Linnaeus’ Larks & Owls.Â Interestingly, Antczak ran into similar challenges.

Brandon compiled images for each specific plant species from herbariums around the world. Using water as a solvent he transferred the ink from each plants’ image onto paper using a printing press. The swelling of the paper, combined with the pressure from the press caused creases to form in the paper, a physical attribute reminiscent of plant roots.

Here, those imperfections of physical life created art. The swelling of the paper creates something texturally beautiful.

What is even more interesting, is the list of plants, along with their bloom times.Â

The list has scribbles of modifications and changes — looking surprisingly similar to my own garden list and plans, after real-life invades.

I remember that when it came to my own flower garden, I missed everything. In the mornings, I forgot to check on the roses, as I was occupied with Captain Kangaroo. By afternoon, I was busy climbing a tree, so I missed the Four O’Clocks. When the Moon Flowers came out, I was playing Ghost in the Graveyard. There was a rhythmic mystery going on in my very own flower garden, but I scarcely took the time to participate and watch what was going on.

Visually, I missed the blooms at their appointed times. Yet, the beatings of their appointed bloom times cycled through my memory. I may not have seen the Morning Rose close, but I knew it did. I never forgot the spectacle that my eyes have yet to see.

Apparently, all of us who speak the language of plants, have yet to capture their elusive rhythms.

My Secret Veggie Garden: Edible Plants for Your Front Yard
I...
Their Energy
S...
It's Not As Bad As My Imagination Tells Me It's Going To Be
H...
So, I Called My Dad
I...
It's Just a Packet of Seeds
T...
Potato-Leek Soup For Christmas
I...
Share on FacebookShare on Twitter
Gardening, memories