Some of you may be traveling with kids over the Thanksgiving Weekend, so I thought I would share this story with you, in hopes of helping you plan with success, a bearable car ride.

Last summer when I drove to Ann Arbor to visit my Dad, I cleared the library CD shelves and garnered a great collection of kid books on CDs. The kids are great listeners, and we usually listen to something new every trip we take to the lake. This time, I had some great fantasy ones, some adventures ones, and some funny ones. The goal was to keep the 6 and 7 year-olds, my only company, for the trip entertained — in the same way that I have done in the past.

I pushed the first CD into the slot. They wanted no part of it. I pushed the second selection in – nothing. Finally, we had exhausted all of the first chapters of every CD, and they still had found nothing more exciting than to tell each other knock-knock jokes and pinch each other.

They were getting on my nerves.

So, in my attempt to keep from loosing my own mind, I pushed my own CD book into the player, and I tuned the boys out, and started to listen to my gripping story, Like Water For Chocolate

Now, before you panic, realize, that everything is written in an “allegoric” style, with the only sensual references referring to melted butter, and fruit. So, the content was “over their heads.” Besides, they were having too much fun pinching each other and screaming to listen. Except, they stopped pinching and screaming. They suddenly became quiet. “Maybe they’re tired,” I thought. But when the CD came to an end, they said, “Start the next one.”

They were hooked on the storyline. So, I put in the next one, and the next.”

We had some wonderful conversations about “crying in the soup,” and how what you’re “feeling when you’re cooking” changes how the food will taste. And so, with life.

Finally, when we were making our way back to the lake, full of joy at how great Grandpa was doing, we were at the point of the book when Tita was making ox tail soup. As she cut up the carrots, diced the onions and boiled the broth, the boys, now hungry from the drive, were practically drooling.

We arrived. Finally. The boys jumped out of the car, ran to the garden, and started pulling whatever vegetables they could find for the soup from the garden. It was not Ox Tail Soup. Just broth, some beans, onions, carrots, egg noodles and fried zucchini on the side. It was all we had. I knew planting that garden would come in handy.Â  I couldn’t have been happier, using the stuff from my garden, making this food for my boys, just like Tita, in the book. Proud. 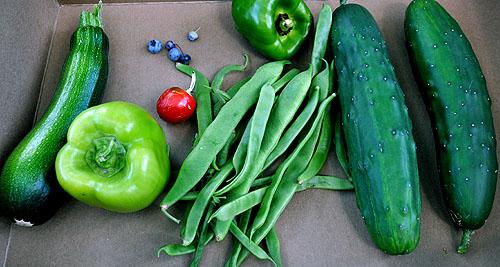 You want to know the best part? Once I made the soup that night, tired as I was, they decided they “didn’t like it.”

How To Work From Sun Up Till Sun Down
I...
So, When A Reporter Is Coming To Your House
a...
Nice Photo
I...
I Think I Need to Change that One to Lousiville
I...
Meet my new neighbors
...
Poverty and Wishes: They aren't poor, I saw a bag of chips
W...
Share on FacebookShare on Twitter
clean, Eat, Gardening, Laugh