You know how you are gifted with those “favorite days” that surpriseÂ you like unexpected bequests handed down by an angel? The unforeseen ones, when reality is suspended just a bit, and things just magically unfold into a day that seems to be designed around your every whim? Here, back in the Midwest, with its dreary days… I still think back on this day when I was in NYC, and I am still lifted away.

You have read The Goldfinch: A Novel (Pulitzer Prize for Fiction)

? Mesmerizing. And, if you have read the book, you can’t imagine a visit to New York City, without thinking about walking through the pages of this book? That’s all you could think about…

I was right in the heart of where most of the action takes place in that delicious novel. However, when I read this article, I was deeply disappointed to learn that the places just didn’t add up.

“Page 362 (note: This is the worst offense.): “As tired as I was, and cold, still my heart stiffened to see the Park, and I ran across Fifty-Seventh (Street of Joy!) to the leafy darkness.”

First, Street of Joy? Really? Now that that’s out of the way, did Theo bound up a couple of blocks that go unmentioned? Or in this not-so-distant future did Central Park descend two blocks, obliterating Bergdorf’s and the Plaza and nestling up across the street from the Apple Store? It’s called copy editing. The southern edge of Central Park is Fifty-Ninth Street.” From The Toast.

This was needless to say so sad toÂ learn. But what’s a girl to do, while she’s in New York? I just started walking it off… I just kept walking, and yes, I did start at Central Park, and eventually saw that Apple Store, and Bergdorf’s. The story works — if youÂ suspend your belief in time and logistics… just a bit… and you keep walking. Eventually, you’ll see the whole map of the novel laid out in front of you, and it begins to work… in a kind of dreamy-like state, which may have been Tartt’s original intent, after all. Yes… Theo was a bit “out of step with reality” many times in the story… with shock, grief, disbelief, drugs, and sleepiness. 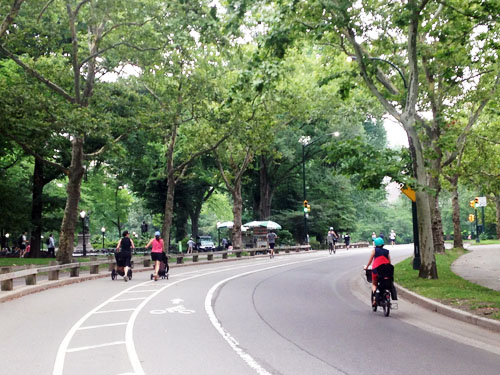 So, as I kept walking, my goal was to make it to The FrickÂ Collection. Because, that’s where The GOLDFINCH was… I needed to see this beauty that captivated Theo’s heart, the beauty that pulled him like a pendulum all of his life.

This was a far walk. Â Especially, if you add the Central Park Carosel, The Museum Design Store, and the fresh beauty of the Rumsey Playfield. Google told meÂ thisÂ would beÂ 3.9Â miles round trip. So, I put on my New-York-Girl flat walking shoes — they’re all the rage in NYC, and started walking. I carried an orange for sustenance. And, just by putting one foot in front of the other, hundreds of times, I arrived. 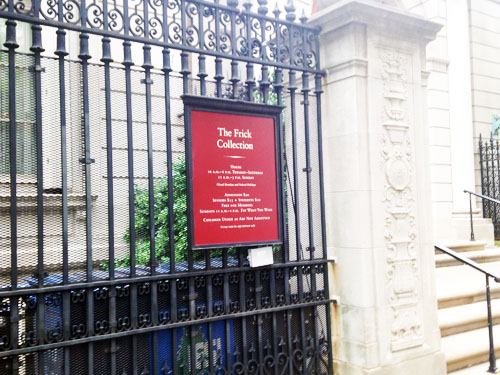 Walking into the Frick was like the surpriseÂ of finding a strip of luxurious soft velvet on a gown, and letting your fingers run down the entire band. Â The FrickÂ was a home in the early days of New York’s history, where the family lived their life out right across the street from Central Park. I stopped on the steps and looked across the street and could almost see the horse and buggy carriages, coming up and down the street…Room, after room of art. You can actually take a VIRTUAL TOUR here.Â Â Want to escape somewhere this afternoon? Take that tour…

But alas, there was no Goldfinch. I searched and searched every room, and nothing turned up. So I asked the security guard.. and of course, he looked at me as if, “Where have you been?” And I just said, “The Midwest,” and walked away. Apparently, The GolfinchÂ was on tour in Africa or Australia Â — someplace with an A. Maybe the Goldfinch was having just an adventure like me.

So I tried very hard to find myself swept away by some other piece of art. Leighton’s Flaming June, did a spectacular job at this. I know you can’t see this from your computer screen, but the tangerine orange colorÂ in this painting is effervescent… the orange literally radiates from somewhere insideÂ the painting, and this is just completely lost in theÂ photograph. And then, you think about the age of the painting, and somehow, it is completely alive. Completely alive with its own heartbeat and central nervous system… and you are almost hypnotized.

“—if a painting really works down in your heart and changes the way you see, and think, and feel, you don’t think, ‘oh, I love this picture because it’s universal.’ ‘I love this painting because it speaks to all mankind.’ That’s not the reason anyone loves a piece of art. It’s a secret whisper from an alleyway. Psst, you. Hey kid. Yes you.”
â€• Donna Tartt, The Goldfinch

I may have been appeased by “June,” but I wasn’t riveted until I stepped into the Portico Gallery, 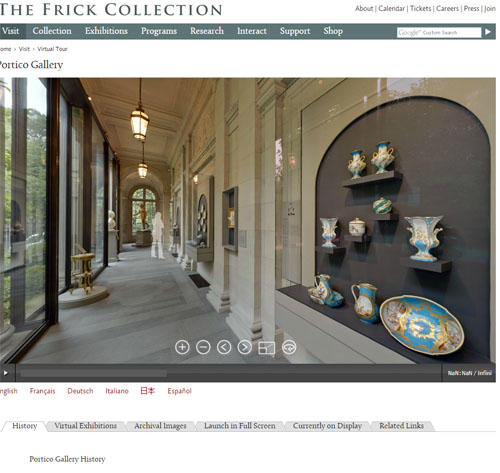 (that is Central Park, just outside of those windows… across the street.) and found The Dead Thrush. Carved from marble, this tiny little piece of art was stunning. Delicate… and spellbinding. Finally, I thought. This was what Theo saw in the Goldfinch. The magnetism that kept pulling him back… that he actually had this beauty within his own private reach… Both similar, in size, I think, you are swept away at how much beauty can fit in such a small, delicate area. The Thrush is dead… but yet somehow looks more alive than any bird alive. 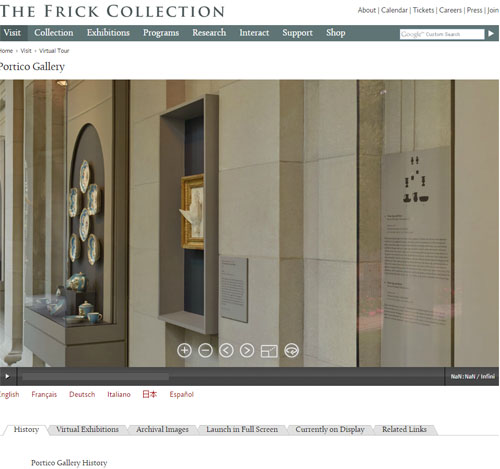 “When I looked at the painting I felt the same convergence on a single point: a glancing sun-struck instance that existed now and forever. Only occasionally did I notice the chain on the finch’s ankle, or think what a cruel life for a little living creature–fluttering briefly, forced always to land in the same hopeless place.”
â€• Donna Tartt, The Goldfinch 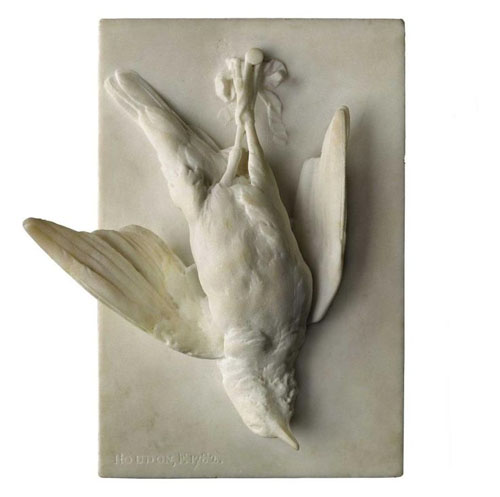 On the way back, I traveled down 5th Avenue, passed the Apple Store, 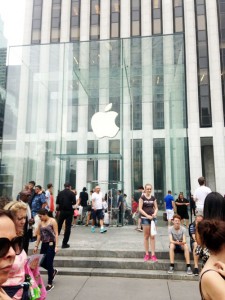 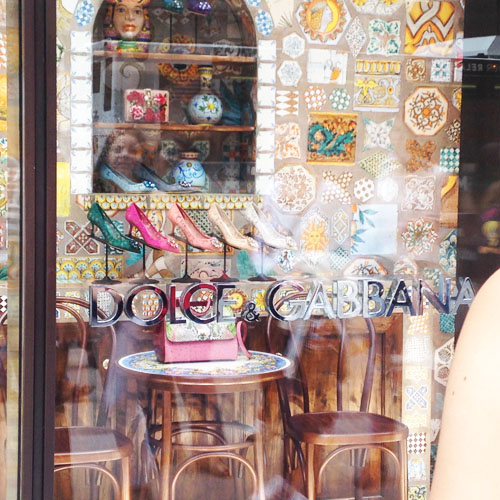 and actually stopped inside of this church, that was open to the public, and said a prayer for everyone back home, 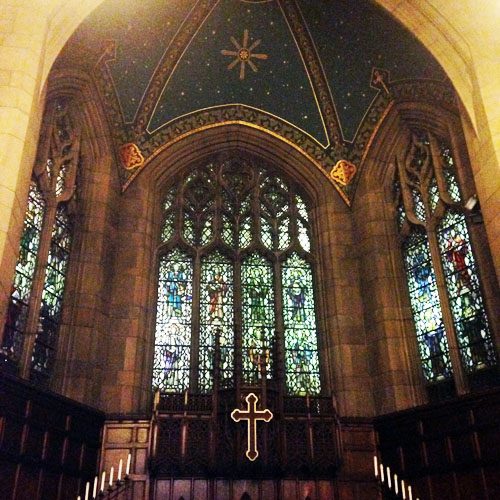 actually, that’s not true. Once inside this magnificent spectacle, I was taken aback by the majesty of a God that is bigger than all of this, and I just sat there in awe and suddenly was able to form a thought about the world. I just sat there and “was.” Â I couldn’t get a thought to stick in my head… I was in awe.. .and maybe that’s what worship is supposed to be about anyway. When I left, I started to regret our tendency to have church services in movie theaters and arenas, where majesty is erased.

At the end, I somehow managed to find myself right in front of the Time Life Building… where I sat down with Donald Draper of Mad Men…which, is another obsession of mine, for another day. 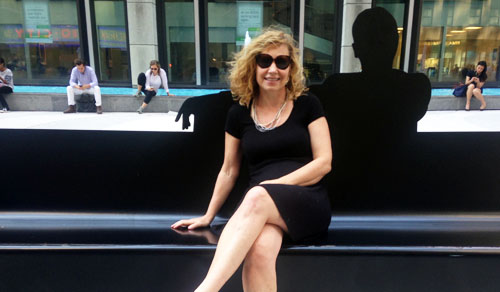 And, then the boys called me to find out what I was up to… and I told them… and they said, “That sounds really boring mom.”

My Mother's Day Present to Me
...
Mom, why is this bunny so ...
R...
I Blinked. I Missed It.
I...
At least this one thing is going smoothly
...
How High Do Planes Fly?
I...
When The Sun Kissed Us All Day Long in Winter
R...
Share on FacebookShare on Twitter
clean, Laugh, Life, love stories, travel