The weather was a bit ominous. The 92-degree heat that sweltered the last four days was starting to swirl around, and kick up a storm. Under the over cast sky, the clock read 5:10, still plenty of time to go tubing before the lake’s 6:30 cut off time.

The boys were game, and dragged me away from the garden to drive the boat. The lake was deserted, save for a few swimmers along the bank, leaving clear waterways for me to cut the boat through the water. I actually relaxed; no, I was enjoying the ride. This was a nice change. The window blowing, the hood from my baby blue Anthropologie cardigan flapping in the wind behind me, with my two little boys, beside me as the side-kick spotters.

I took the corners nice and wide, then cut in just enough to give the boys a tussle behind the boat. I threw them a couple of times, and then, they threw themselves when they tried to jump over each other.

My husband was at that moment making his 3-hour trek to the lake, and would arrive around 7:30. Already, I envisioned pulling some basil and garlic from the garden, and whipping up spaghetti Bolognese as a homecoming meal.

So, after about 40 minutes, I cut the engine and said, “Let’s go in. I have a meal to make.” I got a little kick-back… a bit of whining, about “Please, let’s go one more time.” So, I gave in, and took them around, one more time.

Halfway around the first curve, I threw one of them off the tube. Unintentional, I swear.
He actually said, “That was AWESOME.” Proof is in the pudding.

Because I dreading parking the boat, I always ask the boys to come into the boat so they can grab the poles and the dock, as I bang them coming in.

“All ready?!” I said. “Everyone sit down.” I hit the blower, turned the ignition, and nothing. I tried again. Nothing. The boys were so rowdy and being so goofy they didn’t even hear me, “Something is wrong.” 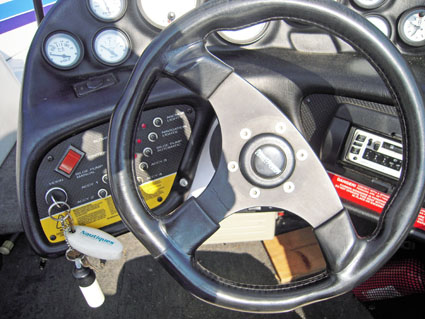 We waited a few minutes. Nothing. Fortunately, I had my cell phone in the boat, so I could see when it was close to 6:30, the lake’s quiet time. I called my husband, who was now about 90 minutes away. He talked technical about the alternator not charging the battery, and said, “Flag down a boat so they can tow you in.”

There happened to be a boat coming by…so we waved our arms. They waved back and smiled.

“They’ll get us next time,” I said. Except, the boat decided to park on the other side of the lake. I propped my feet up as the passengers began to dive in and swim.

As we waited, my mind started to search through alternatives. The boys could swim to shore, get the fishing boat, and tow the ski boat in. There were people swimming along the shore, people that would have loved to help. But this was a minor problem, I thought. We could get out of this mess ourselves.

As the wind blew, we began to drift closer to shore, on the far end of the lake, far away from our cottage. But, this made us close enough for the boys to be able to swim to shore to get home. So, I sent the two older ones overboard to get the fishing boat. Except, they all jumped shipped. Everyone one of them. 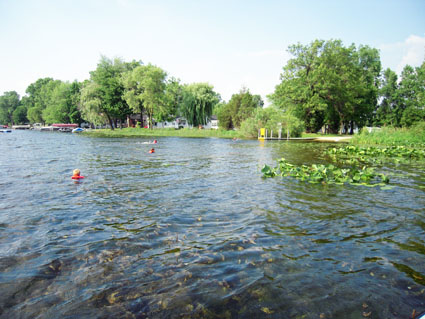 I should have seen that one coming… we were down by the Lilly pads, where the frogs and turtles live. No sooner had I formed the thought that I heard, “Look at this big turtle I caught! Take a picture!” 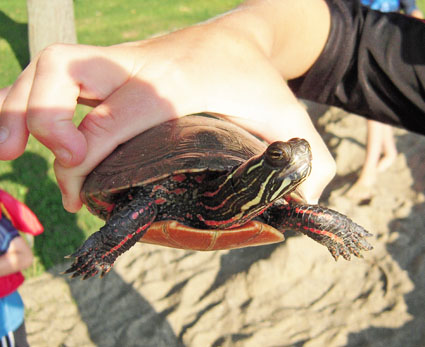 Next, there was a thud, and my oldest son started moaning. He wasn’t kidding… his moan was growing more intense. I watched nervously, as he climbed out of the water. “OK. He’s walking… that’s good,” I thought.

“I cut my leg on that metal sign,” he hollered. “I think I need stitches.” Undaunted, he kept running back home, and as he left, I yelled, “Apply pressure… get ice!”

This was bad news for our situation. My strongest boy would not be able to jump into the water and pull the boat. At this point, hindsight tells me, I should have instructed the boys to get help right there and then, but they took off before I could think, and I still believed we could do this. After all, we read Nancy Drew.

As I waited for their rescue boat, the wind picked up. The storm clouds were thankfully passing, but the wind was not good. The big ski boat was drifting farther and deeper into the weeds and muck. All I could was sit and wait.

My heroes arrived in the aluminum fishing boat, and my heart swelled with joy. “I love these boys… from the bottom of my heart. And even if we have to spend the night in these weeds, I wouldn’t want to be with anyone else.” 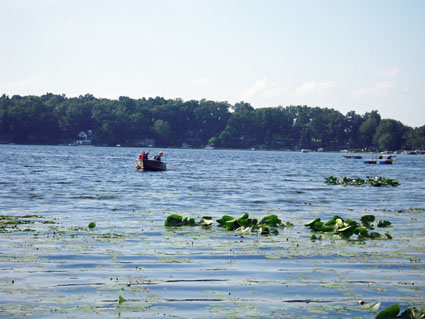 Little did I know, we almost did.

The problem was the weeds. Soon, the fishing boat was in the weeds, as we tried to connect the two boats together with our towrope. Once there, we couldn’t turn the fishing boat motor on, as we would risk the weeds getting caught in the motor.

We had one oar between the two boats and only one life jacket. As my oldest, and strongest, could not get in the water, the second oldest jumped in and tried to pull us in, while the oldest rowed. For every five feet they rowed us out of the weeds, they would stop to “recover” and complain, “this is never going to work,” they complained. 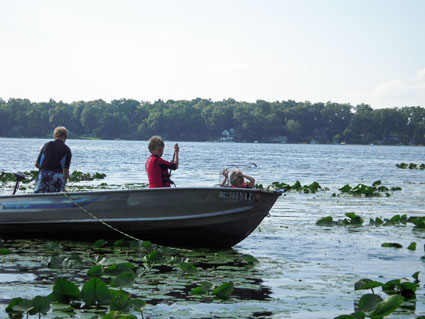 While they were “recovering” the wind drifted us 10 feet back. This happened about 100 times straight. Row for five feet. Stop. Reover. Drift further into the weeds. 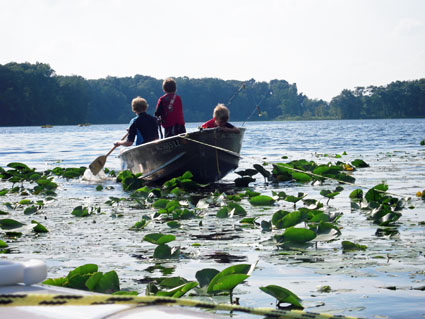 And, did I mention, they also brought the turlte with them on the rescue mission. So, while we’re busy trying to keep the ropes straight, oaring and dragging, their worried about the GD turtle! They were letting it run loose in the fishing boat, and I was just waiting it to bite my oldest, already injured son. It almost did. “Put the turtle in the landing net, or let it go.”

As the avid Nancy Drew reader I am, I knew all the right things to say. Focus on the task at hand, keep persevering, “We’re almost there… we’ve almost got it… keep rowing.” If anything, I was going to teach my boys perseverance today. 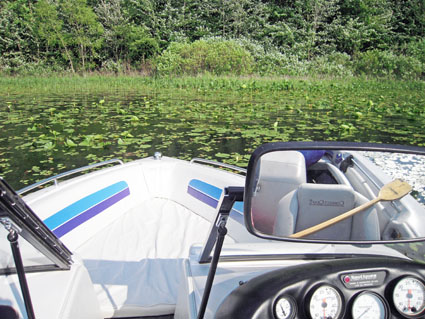 Then, the band-aid came off. The same one that my son hastily put on when he went back to the cottage to get the fishing boat. I saw the cut. It was bad. Something shifted inside of me at the site of that blood. The blood that was formed while in my belly. While I was not dressed for water play, in my Anne Taylor sundress, I peeled off my Anthropoligie cardigan, and jumped into the weeds.

Let me tell you; I was in the muck!! I mean real muck. The weeds were so thick I could stand up on them as if they were 10 feet bedspring coils all wrapped around me. I used the springs – weeds – as a launch pad for leverage to pull the boat with the towrope. Except, that I often pulled back, as much as I pulled forward. The boat was going in circles. In fact, I was actually pulling the fishing boat further back into the weeds. The boys were clearly onto this, and letting me know.

As I worked, my second son decided to chat. “Hey Mom… you know that one comedian…”

“Save your strength!,” I yelled. I have no life jacket. I could die out here. “HELP ME PULL!!!

All I’m saying is, for the strength I was exerting, it’s a good thing I’ve been working on my 30-day Wii challenge; I needed the core body strength. We were getting deeper into the weeds so quickly. Then, I left the weeds, and came across the Lilly pads. Can I just add that, the roots of Lilly pads are quite thick, and silky smooth. For a second, I thought some handsome male with shaved his legs was wrapping himself around me. I kicked and got the heck out of there. “Not right now!”

Then, my cell phone rang, and my oldest son, said, “MOM! Your phone’s ringing!! I’ll get it for you.”

He jumped into the boat and answered the phone. It was my husband.

Finally, I sent my second oldest to swim to shore to get help neighbor. When he arrived, I had just figured out that if I pushed the ski boat from behind, I could get some traction. We were doing quite well, when the muscles in my stomach and my arms were about to give out, and he grinned and said, “Are you a damsel in distress?” Yes, I said, as I climbed up onto the back of the boat, my Ann Taylor dress dripping. “Yes we are.”

And that’s exactly when I heard about Michael Jackson AND Farrah Fawcet.

He climbed into the water, and maneuvered us around out of the weeds, and tied our boat to the fishing boat. We were home free. Then, he asked me this. “Have you tried starting your boat since you got out of the weeds?”

I turned the key. The boat started right up.

By the time we got back to the cottage, my husband had arrived, with bake-your-own Donato’s Pizza in tow. We think that strategically placed bandaids will avoid the stitches for now. I started to take a shower, but as I started peeling off my dress and underwear, black muck started dripping off my drenched skin. I rinsed off in the lake, and then took a shower. As I ate, I couldn’t eat fast enough to replace the exertion that left me today. I am tired all over; and deeply in love with my boys.

The Tree Where I Wrote the Hugh Blair Award Paper
T...
O Holy Night
T...
Frozen Cattails
"...
We Drove Until We Found the Sun
T...
I'm Scarcity Conscious
I...
Work at the Lake House
...
Share on FacebookShare on Twitter
clean, Laugh, the lake house
10 comments to “Then, we were stranded on the lake”