There was a strong wind, around 16 mph, and the sun was shining brightly. It was hot — the hot humid heavy heat that those winds could not blow off our chests. The seconds started to become filled as if they were minutes around 3 in the afternoon, when I heard a bang, a crash and then a tumble. Funny, how, after listening to enough kid-imposed disasters, I’m keen to the fact that if there is not silence after the first bang, then it is not a kid-induced bang. Because kids have an instinct to know that if anything makes a noise – they quit “before mom comes.” So, this bang was followed by several more loud noises, and I ran to see a huge tree limb—about 9 foot, running perpendicular to the hole it left in the roof of our screened porch. 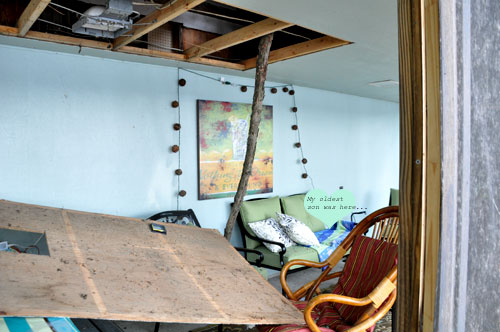 Beside the limb sat my very bewildered 14-year old, who was, miraculously all right, even though he was sitting right beside the limb. This scene was to my right.
That very second, to my left, was the lake, where my 12-year-old came running out of the water screaming, “The snake is back.”
“Kill him,” I screamed. “Grab a rock and hit him.”
Then, I turned my head back to the right, and said to my 14-year old, “If you’re OK, get up and get down there and that snake.” I ran and to get my camera – for proof in case if anyone, heaven forbid this, gets bit by the snake, we will be able to identify the type of snake he is. Just then, the little brothers reluctantly ran out of the water, while screaming, “there’s a frog, hurry up and catch it.” 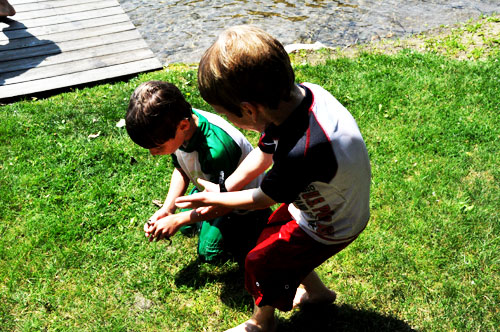 I ask you, Is there ever a lake disaster without a frog in the story?
And, the snake was lost, this time, despite our efforts snare him.
Then, my frog catcher walked up the steps and saw the porch and in his sweet, tiny voice asked, “Why did you put a tree on the porch?”

Later, the storm came. A wicked one, with torrential rains, huge winds that had me dialing my husband, who was currently driving through the storm, saying, “I forget – when there’s a tornado, do you open the windows or close them.” And he simply said, “Get to the basement.”

The winds did this to our solid, heavy metal table. 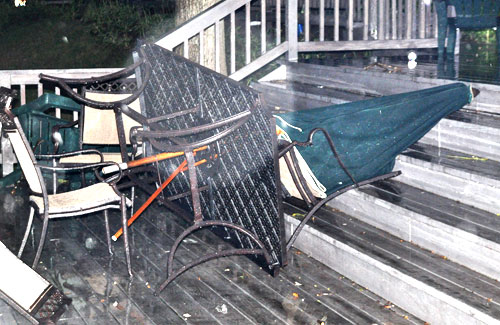 In its final display of defiance against us, the storm threw those blue chairs, which I use for relaxation purposes,Â  into the lake.

Moms With A Camera: What It's All About
I...
An Obscure Donkey and the Glow of a Star
T...
The Irrationality of Motherhood
...
Important Stuff I've Learned About School
N...
Keeping Track of the Marshmallows In My Pantry
T...
When We All Breathe Under the Same Roof
N...
Share on FacebookShare on Twitter
clean, Laugh, the lake house
2 comments to “The Storm Had Yet To Start”