It wasn’t even even Memorial Day yet, and plans for the summer were already being made across dinner tables in America. You relished the thought of long, endless days of summer, when the space between sunrise and sunset lengthens, and you will do so much, including getting together with your friends on those long Sunday afternoons for a picnic. Then, suddenly, it’s the end of July, and your days are not endlessly stretching into nothing – they’re crammed pack, and you can’t even begin to think about that picnic, because who has time to get the house and the backyard ready?

But, this year, I’m making that happen. I’m using our National Park as my backyard (no fuss and stress for me) and we’re meeting up at the Dayton Aviation Heritage National Historical Park, right next door to the Air Force Museum. Because, friends, as Coca-Cola puts it, America Is Your Park, and let’s get out there and play, be active and create memories. 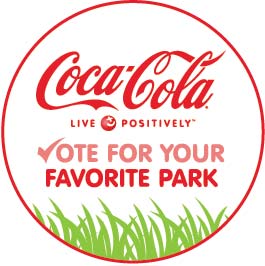 We’re taking part in the second annual America Is Your Park campaign sponsored by the Coca-Cola Live Positively Initiative. The goal is to get us up off the couch, get active and help a favorite national, state or local park win a recreation grant provided by Coca-Cola Live Positively. The first place winner receives $100,000 and the title of America’s Favorite Park. Second place wins $50,000, and third wins $25,000.

We called ahead, and learned there are free tours on the history of aviation, and a short film that shows the Wright Brothers failed and successful attempts at getting that plane off the ground. The kids will have plenty of space to play kick ball, and I might even bring along some of my treasured coffee bags to hold an old-fashioned potato sack race. And we can join in the fun too – because we won’t be scrambling around in the kitchen! After the picnic, we can finally take that tour of the Air Force Museum… the boys are going to drool when they see that U2.

Personally, I can’t think of a better park to win than the Heritage Wright Brothers Park – a place that showcases the dreams, failures and ultimate successes of two brothers who dared to dream big – really big.

To vote for your favorite park, and upload photos of the park visit Live Positively.com/americasparks and check in on Facebook Places when you go to your park. Round up some friends, and go plan your own national park date and vote here! Voting runs until September 6, 2011.

Fall Drive
Drinking Stinging Nettles, Dandelion and Oat Straw, For Energy and Stamina
"...
He's Wordless
...
Oils to fight the flu
I...
All The Things I Can't Tell You About What Happened In New York
A...
If It's Important Enough To Whine, Cry or Tattle About: Give Me 50 Words
T...
Share on FacebookShare on Twitter
Life