There is a certain calm that comes when you begin to focus on the clutter in your homy by category. Â Â  I know, you’ve been here before Vowing to declutter by throwing out 50 thinggs, only to face a mountain when you come to that pile that you have absolutely no idea what to do with. And, literally, the emotional churning that it casues in your stomach to even think about those things is enough to make you bury yourself with more clutter, rather than to go through the tough work of trying to eliminate it. 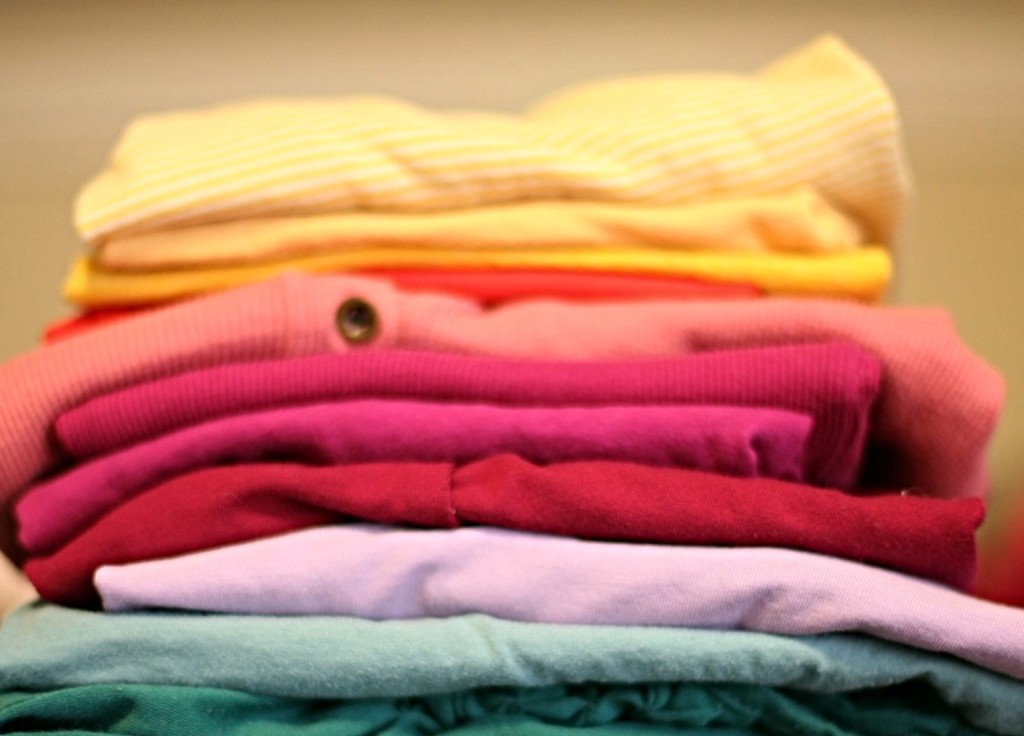 But, there is hope for us. When your eyes are told only to focus on clothes, you’re free to overlook that overflowing stack of magazines, the overloaded filing cabinet, and the kitchen knife drawer that somehow has accumulated more than knives. Â You know those items will get their turn soon enough… and you do not have to deal with them today.

Yet, somehow, the simple act of focusing on the stray clothes, the mis-matched socks, the odd spring coat, and the sweater that never fit just right, creates a sense of order — in spite of all the other categories of chaos.

As I was listening to The Life-Changing Magic of Tidying Up: The Japanese Art of Decluttering and Organizing

, she talked about the importance of folding your clothes. The whole time I was saying, no way. I’m hanging everything, just like always. But, as I was pulling items out of my closet, I saw so many shirts that had fallen off their hangers, or were lost in the shoulder of another hanger, and I realized I had been missing about a fourth of my wardrobe.

So, I started folding. Not in rolls, but I n her little rectangles, that you stand straight up, like colorful folders in a filing cabinet.

Two things happened. I had so much leftover room! I found plenty of drawer space, simply by standing my clothes up, instead of lying down. Yes, they do “stand up.” It was amazing. I even added my casual blouses, which I had staunchly decided would stay on hangers. But, I kind of felt like there was a party going on in these drawers, and I didn’t want to leave the blouses out. This brings me to my next point.

The second thing that happened, was that I could instantly see all of my clothes, and all the colors and the patterns, all there together. And, it was quite pretty. The clothes all by themselves started to create their own order, a pattern started to emerge that was uniquely me. Something that was lost while they were stuffed on that curtain rod.

Having all of your clothes in one contained space, (You can pull OuT several drawers for a birds eyes view) makes it easier to coordinate what to wear. It already saves time.

So by the end of four hours, my closet was empty, save for a few dresses and suits. But I have one colorful, happy dresser.

Turn A Pumpkin Into A Pie
M...
So, My Phone Started Ringing as We Headed Toward The Runway
M...
Dented Pots and Pans and Sticks
W...
Keeping Your Christmas Tree Fresh
I...
Hey, Warrior Woman, You Need Some Fizzy Lemon Barley Water
T...
NYC When You Still Have So Much To Do...
I...
Share on FacebookShare on Twitter
Household, Life, Try This