One of the benefits of being a Mom, is to be the recipient of stuff like this red cow, which is really a bull. (As my kids have corrected me no less than 12 times): 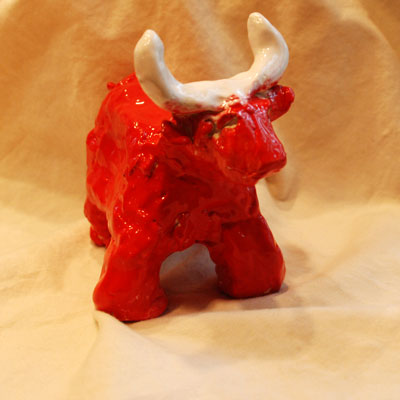 The gift is not in the bull, although, I do love it; it’s in the latent, crazy, quirky reminiscent memories from my past, that would still be buried if I didn’t have the bull today. Memories that my 9-year-old’s soul is completely, blissfully, oblivious to. Yet, how did he know this cow would resonate with me? The red on this cow is stunning. A true red that stands in contrast to the organgey-brown-colored reds we were stuck with in his pre-school clay class. So I remember little hands working the clay.

As for reminiscing, I will start with this: My son feels overshadowed by an older brother, who does well in art. And that’s all I’ll say about that, except that, in case you didn’t know, boys are fiercely competitive. As school started this year, my 9-year-old became increasingly vocal about how much he hates Wednesdays because it’s art day, and even faked “stomachache” on that day. He does not get along well with the mean art teacher, he tells me, because he’s such a pain in the neck. When the report cards came out, my 9-year-old reluctantly handed me his, with a caution: “You’re going to see a very bad note from the art teacher, but that’s just because he’s mean.” I checked. The note simply said, “He needs to stop worrying so much.” I talked to his regular teacher about art. Her face lighted with bewilderment. Her words: “I’ve never seen Mr. T (the art teacher) so concerned about a student. He’s wants your son to stop trying so hard.” I see the problem. He fears being average at anything. 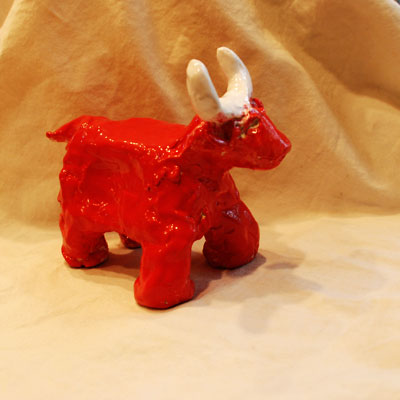 When the bull came home yesterday, I praised, and congratulated and gave it a nice spot in the kitchen, because I really do love this shinny red thing. I have this thing for cows, and few people have brought me some for my “collection,” but I’m far from serious about that kind of thing.

Not until I pulled out the cheese, that his younger brother insisted that I buy, (earlier that day, way before the bull came home) because they looked like shinny wrapped silver coins, did I see the connection. I’m dropping these red coins into their lunch snacks, and wondering why this is the first time I’ve ever bought these cute little cheese buttons for my kids, because they’re just so gosh darn fun, and no, they don’t even have to be refrigerated, and heck 12 percent of our daily calcium requirements. To open, you peel the shinny red plastic, and scratch off the wax. That’s when I see the tag. That funny little laughing cow, all red, with horns. Which makes me ask myself, isn’t she a bull anyway? Oh no, right. Those are just earrings she wears. 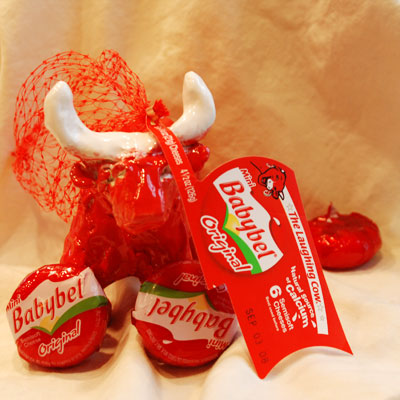 He looks exactly like our new bull, and my son didn’t even know he was creating an Andy-Warhol-like icon in his 3rd-grade art class. He doesn’t even like Campbell’s soup. I consider selling bulls on Etsy, because they are so cool, in a retro-ishy-way, but realize, I can’t part with this one, and where would I find a kiln? Then, I remember the time my husband and I were looking for the best cheese in the entire world when we walked through the streets of Paris, and found it from a street vendor. This amazing, great cheese was not La Vache Qui Rit, which we laughingly tossed aside as the French version of American Velveeta. An American friend, recently back from France, swore we had to try this AMAZING Cheese. He said we could go to any French market and say, do you have “Moo-Moo Cheese” or “Ha-Ha, Moo-Moo,” and they would know instantly, exactly what we were talking about. Yeah, right, Damn Yankees, the would say. Heard that one enough. Did you know that every second, 125 portions of this laughing cow cheese are eaten around the world?

Now that his sculpture has touched my heart and moved my soul by evoking memories, he is truly an artist; one that is far from average.

My son constantly reveals a rich, incredible, diverse, rich tapestry, with layered threads, woven deep from his simple words and actions. You hold the tapestry this way, and you see this, and turn it over, and you see that. He’s a good book and a movie. Of course, it does take some insight to come up with, “Mom, did you know you’re older than Jesus,” when you’re only 4 years old. This cow, made with his hands, with bones protruding, exhibiting the same fierce strength he has within. This bull simply epitomizes my love for him.

He made it
H...
The Easy Way to Grow An Indoor Kitchen Herb Garden: Best Semi-Hydrophonics Set-Up With Self-Watering...
...
That bag ain't heavy; it's my brother's
T...
Lemon Barley Water
W...
Who is that Oliver Guy Anyway?
"...
Tomato: Roasted
T...
Share on FacebookShare on Twitter
clean, Laugh, Life, memories, parenting
18 comments to “The Laughing Cow Lives In My Heart”