Last summer, when my son volunteered at a camp for a month in upstate New York, the camp leaders emailed all the parents their addresses so that we could send them news from home. Phones would be confiscated,Â so our letters were the only connection to the outside world… So, I sent one letter — maybe two, and that was it, over the four weeks. 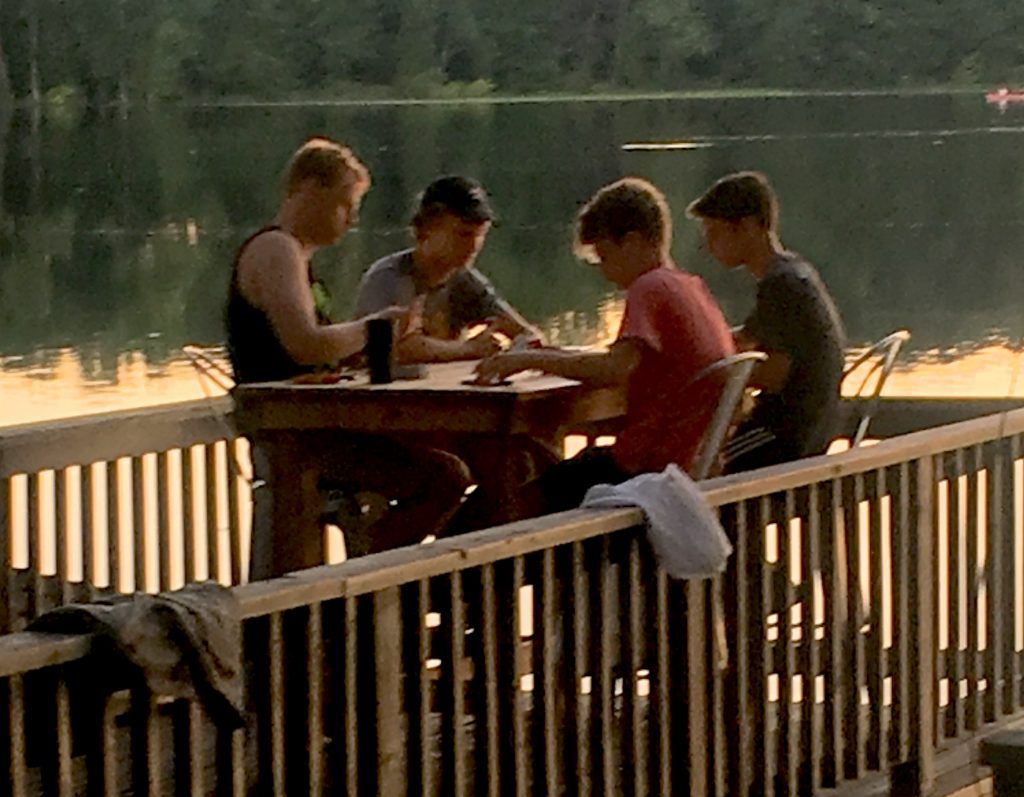 Yes, my kids will correct me… this photo is of all of the boys together BEFORE one went off the camp. Not a picture of them writing letters… It was such a rare occurrence…

Might I add — phones were returned at the end of every camp session, once each week, while the crew transitioned to the next group of campers. So, I talked to him every week, and if he REALLY needed something, he called me on the camp house phone. And, during the final week, I think he had access to his phone at all times.

However, there was still quite a bit of downcast shoulders during mail callÂ if your name was never called. I learned this almost a year later when my son was packing for camp again, for the same stint – and said, it would be nice to get a bit more mail this year.

That’s exactly what he got. Not only did I ramp up my letter writing cartel, but I rallied just about every person I knew to send my kids some mail. I texted his summer address to people he knew, and even to my clients, who didn’t even know him. I rallied his elementary school teachers, neighbors at the lake, neighbors here, and even a few of my clients. I said, “I know you don’t know my son… but he’s away volunteering for the month, and all he wants is mail! Would you mind sending him some words of wisdom?”

Apparently, they did. The report from camp was that he received more mail than anyone at camp — including the GIRLS! “You know how mail slows down the last week of camp — even the girls weren’t getting mail,” he said. “But I still had plenty of mail coming in.”

For future reference, he did not appreciate the “meme mail.” As funny as it was for his brothers and friends to sit around the table with paper and pencil in hand and to”
“group-decide”, “let’sÂ all make him think we think he’s actually in Jamaica.” So when the 8th later dripped in with the words, ‘Wah Gwaan’, the joke was lost…

Rain Dance In Prose
&...
Is that a bear behind me, or just a skunk?
&...
Why and How To Make Your Own Vitamin C Serum
V...
A sight for sore eyes, and tired dirty hands
...
Night Creatures
I...
The BEST babysitter in the entire world
I...
Share on FacebookShare on Twitter
clean, Laugh, Life, memories, the lake house