Last weekend I cleaned up the garden, folded in some leaves to mulch the soil for next spring. Then, I pulled out the shovel and started planting my garlic – yes I know – should have been planted weeks ago, but life happens. While raking in the leaves, I noticed big white seeds – about the size of the Jack in the Beanstalk seeds.

This is exactly what they looked like — taken earlier. 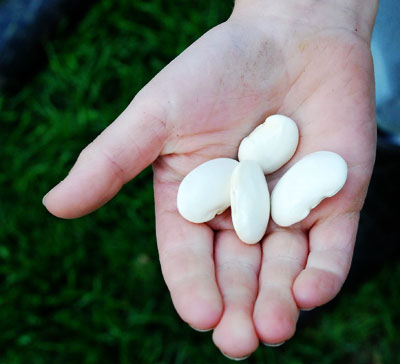 As I dug, I noticed more seeds, so I picked one up. These white things were not seeds. They were eggs. One egg had fallen under the blade of my shovel, and was opened. (I will not elaborate on this point — but just ask my kids — they’d love to tell you all about it.) Then, I realized that these were turtle eggs. I was standing in the midst of a huge turtle bed.

I quickly buried the baby turtle. “The garden is far, and uphill from the lake. Far from the lake,” is all I could think to myself as I worked. “Why did she climb all the way up here to plant her babies?”

The man who trimmed our trees two years ago said a large turtle snuck up on him. “That turtle could have taken the leg off on of your sons,” he said. He caught the turtle and threw her back into the lake.

Here’s a picture of the turtle. Yes, you can say it — she’s ugly, and she is armed and dangerous. 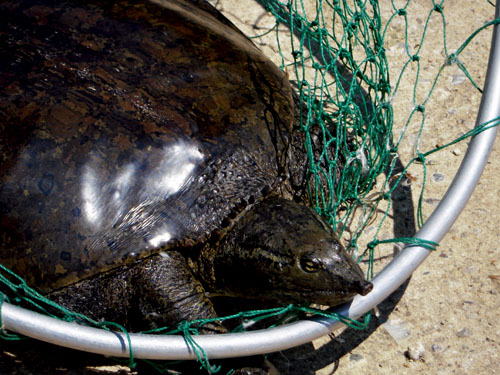 You can see her size by looking at my husband’s wrist. (Which is still attached to his arm.) 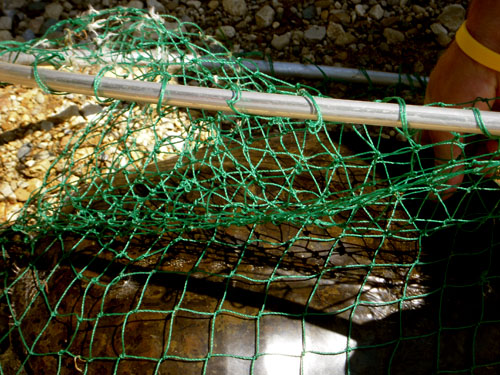 Now, her babies are buried throughout my garden — along with the garlic.

Top Ten Pilates DVDs for beginners and beyond
T...
Something to Write Home About
A...
Motivaton
"...
That Face
H...
Walking Away with a Billion Dollars
M...
Midnight storm clouds dripping silver
N...
Share on FacebookShare on Twitter
Gardening, Laugh, Life, the lake house
5 comments to “The Garlic and Turtles are Safely Planted”