If you read through the end of this post, there’s a good chance you may change your mind about something you swore you’d never have the strength to do, and just decide to do it. Here, I will give you two very convincing reasons to fast, and more than one of you will probably start one before the week is over.

The official definition of The Daniel Fast is to only eat food from seed, and drink only water and no delicacies. No processed food, nothing with leviningÂ and nothing fried.

Popcorn = Yes, popped in coconut or olive oil. No butter

Potato Chips = No. Processed and fried.

Ezekiel Bread? = Many contain yeast. Check the lables. No yeast.

Â How is that a Fast? For those of you willing to join the rising new movement across America to Fast with your churches in January for 21 days, the Daniel Fast may feel like the easy fast, or the non-sacrificial fast, depending upon your reason for fasting. After all, the traditional fast is to drink only water. 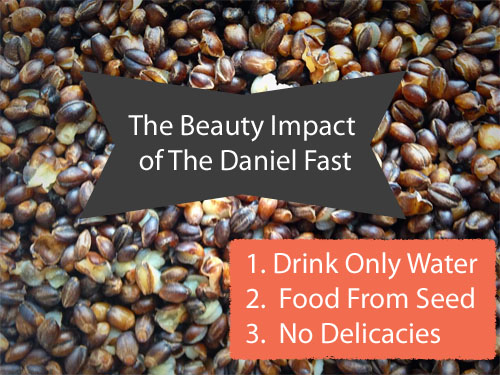 I did want to fast with our church, but didn’t feel I was strong enough to do a water fast. Â  So, I opted for the Daniel fast, completely believing it was the weaker, easy, fast. Â In fact, it would be almost like not fasting at all, because, how easy is it to combine some beans and grains to create a complete protein and feel satisfied?

The surprising result was that at the end of the fast, Daniel and his three friends looked healthier and better nourished than the youths who had been eating the food supplied by the king.

The fast keeps you from eating processed foods, dairy products, caffeine, alcohol and of course, meat. These are all foods that naturally hinder the body from optimum health.

So, the first advantage of The Daniel fast is vibrant health. clear eyes, clear skin, amd pounds drop. You can read about the health benefits in The Daniel Cure: The Daniel Fast Way to Vibrant Health. Â

At first, I searched the scriptures and looked for guidelines. How many times per day was I to eat? How much? I was looking for some kind of limitation to make this harder — like those doing the water fast.

Now that I am in week two of the Daniel Fast, I can assure you this is not an easy fast. Don’t be fooled by this fasts’ liberal availability of nuts, seeds, fruits and vegetables. This is harder than it looks.

I miss my cup of tea. In fact, I miss my cups of tea throughout the day. I had to stop watching Foyle’s War, because their tea times were sending me reeling. The worst part is, for some reason, no matter how much legumes and grains I eat, my stomach is missing something. I am constantly hungry. Is it cheese? Do I really need meat this much? Nuts cannot even satisfy my cravings.

I’m eating lots of vegetables and whole grains. Â There is no shortage of nutrients and minerals. Â Yet, it seems no matter how many spices I add to my vegan soups, food has lost its appeal. Everything tastes bland. Cinnamon is ok– so I sprinkled some on a bowl full of fresh berries, and quickly remembered that cinnamon NEEDS sugar.

Why fast in the first place?

This is where things get a bit mystical. Fasting, in the Bible, is never required, although the Jesus does say, “When you fast…” Assuming you will. The best explanation comes from the tiny book of Esther in the Old Testament. If you want a juicy, suspense-filled story to read in bed tonight, the book of Esther will give you a satisfying thrill. It’s short and to the point. Side note: it is the only book of the Bible that never mentions God.

Esther was beautiful. A queen. She started out in life as an orphan. The suspense rises in the story, and her big moment comes, and it’s the source of the famous quote, “For such a time as this.” I won’t give it away, but this was a do or die moment for Esther. Lives were at stake. To get ready, she fasted. She drank no water and ate no food for three days.

If you were getting ready for a big moment like Esther’s, starving yourself may seem like the last thing you would do to prepare, wouldn’t it? I’d be filling myself with protein shakes, eating plenty of red meat and kale.

So why did Esther fast? Because Esther was not only beautiful, she had brains. Â The bible is traditionally quite short on explanations throughout the entire Bible: Case in point: “While they were there, the time came for the baby to be born,” Luke 2:6. The entire birth of Jesus is reduced to once sentence. When reading this book, it’s nice to have commentaries to fill some parts in.

This morning, I heard Esther’s Fast explained beautifully. I was sitting in the car, freezing, waiting on the boys to come out of the house so I could get them to school. The sun was just coming up, just enough to let us know it would be another dreary day in January. There would be no light today.

The commentator on the radio explained that this was far too important/dangerous of a moment for Esther to leave to herself. She couldn’t go see the king on her own strength, or on the basis of her own beauty, or her wit, her charm, or her position as queen. These things weren’t enough. In essence, Esther had come to the end of herself.

What Queen Esther needed was supernatural power. She needed a power she could trust. The power that created a world out of a void. (Genesis 1:2.)

Fasting emptied Esther of herself, so that she could be filled with a power that came from out of this world. In her hunger, instead of reaching for food, she prayed. She knew her own physical, earthly beauty wouldn’t be enough to persuade the king. She needed another kind of beauty.

I long for the warmth of tea. For that delicate soft cookie sitting on the counter, that I blindly made for the boys, without tasing. And a handful of potato chips. You can find many “cheats” on the Daneil fast — there are ways to give you a treat without “sweetners” and grains that fill satisfy your cravings for pototo chips. But then, is that a fast? Will I be missing out on the great infusion of power Esther received? I’ll keep denying myself for one more week, and let the fast to continue to do its work.

Is Yoga a Cardio Workout?
D...
Wrinkle Releaser or Monster Spray?
T...
Supervised Teen Driving: A Golden Opportunity To Connect
J...
The New Year's Resolution that Takes Longer Than One Year
W...
Being a Part of Something Bigger
W...
Robin: A Retrospective Look
O...
Share on FacebookShare on Twitter
health, Life, spirit, Try This
One comment to “The Beauty Impact of The Daniel Fast”