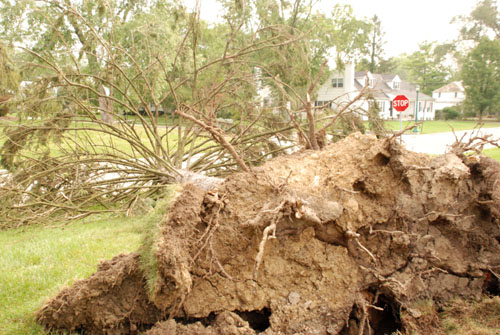 The boy’s football game just started when the winds came. Seventy miles per hour, later recorded at the airport. We held the little boys close to us on our laps while we sat on the ground to watch the game; we couldn’t let them run off to the playground, the trees made it too dangerous for play.

So we sat there watching the game, putting our heads down every time the wind kicked up because the sand from the baseball diamonds blew into our face. In between football plays, we either turned behind us to watch the wind tear out branches from the trees along the playground, or looked at the trees in front of us, across the road, and watched those limbs come flying off into the streets.

I wish I could say that the wind blew so hard that the football moved across the field when the boys put the ball down to play; but that wouldn’t be quite true. But the wind did knock the players around and off their balance. God Bless the Texans; and the Floridians; and those who live in New Orleans, and every single one of you who lives along the coastal regions where they’re subjected to hurricanes. We sat in awe, spectators to not only the game; but to the power of the winds, knowing this was still just a minor show of the Hurricane’s true force.

For an hour, we watched the game, and the wind. And will wonders ever cease? The football commissioner found it in his soul to call the game, citing “that it’s just too dangerous to let these boys keep playing.” So, it is wind, my friend, not heat exhaustion, that constitutes precarious enough conditions to keep ten-year-olds off the football field. 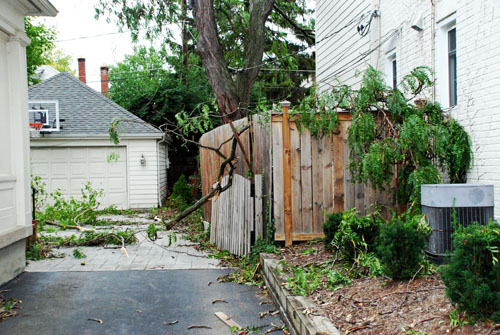 I was never so happy to see a game end in my entire life. As we drove away, the streets were lined with green leaves, over-sized branches and that stripped yellow trunk where the wind had just sheared off a branch. Everywhere. We dodged tree limbs as we drove. I knew then in my soul it would be days before we’d ever see power again. 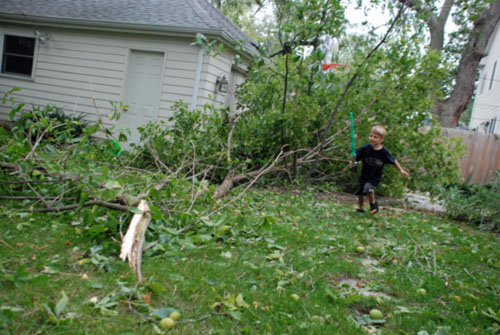 Trying to find dinner was hard; Jersey Mike’s subs had power; but required cash only. Cap City Diner had no power, but the Fish House next door did. The kids don’t like fish. Chipotle was overcrowded; but that’s where we ate. 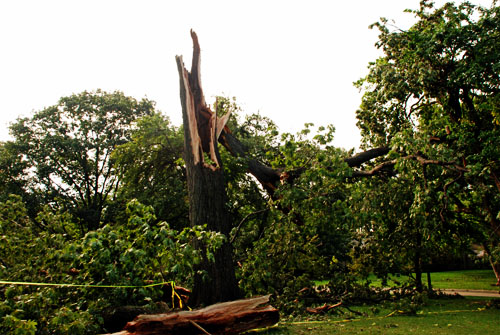 They tell us it will be Wednesday 8 p.m., at the earliest, before we have power. It’s Monday night now, and it’s already been 24 hours. The problem; AEP, sent 70 percent of their utility trucks to Texas to repair damage from Hurricane Ike. They’re on their way back; no one predicted winds like this to happen way up here, 1,200 miles away. 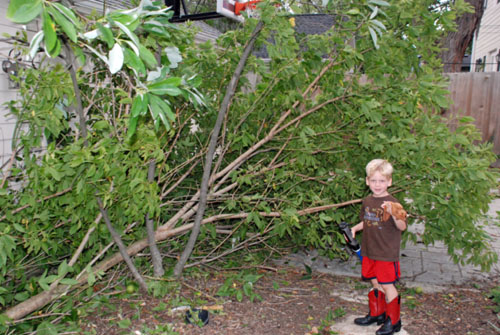 When I went to bed last night, I started scratching my head; it was gritty and grainy. Sand and dirt. Probably from that baseball diamond. Or who knows, maybe it could have been that Texas soil from that hurricane, Ike. Probably not, but it’s more fun to think that it is.

The weather is a pleasant 70 degrees; rain has been minimal, the wind damage to the trees around here has been quite substantial, but fun for the kids. We’re not hot; we’re not cold; we have clean hot running water, and we can flush our toilets. We may loose everything we have stored away in our fridges and freezers, including the blueberries; but this is something we can live with. God bless the victims of the hurricanes. What’s more, the kids may just use up all of their calmity days for the year within the first week of school, and I don’t even have to enforce one rule about that. Life is good. 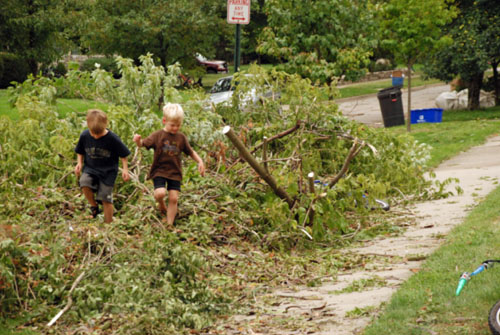 P.S. Thank God for the one library that has power and wifi… they say we’ll be lucky to see power before Monday. And, we got new boots!

The Big Splash
...
Have Your Read Anything by Liane Moriarty Lately?
H...
Every little thing will turn out OK
I...
I Knew So Much When I Was 40
...
Happy Birthday
...
Treasures Off-Camera
S...
Share on FacebookShare on Twitter
Life, memories, news
8 comments to “The day Texas soil blew into my eyes”