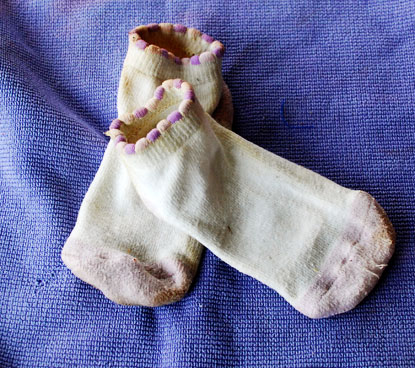 A post in the form of a bridal announcement

The young man (age 6) was wearing these dainty, although soiled socks, at the end of the school day; and he’s not talking about where he got them. The unveiling of the socks took place in the backyard of the boy’s best friend at 4:30 in the afternoon of a school day. The walkway through the garden was paved in red brick; lilac’s were beginning to present their buds; and cardinals could be spotted on tree branches. Present at this unveiling was the boy’s Mother, two of her other two children, the boy’s best friend and at his side, the best friend’s Grandmother. The day was sunny, bright and unseasonably warm, and all were wearing spring attire, all appropriately soiled from a full day’s work of play.

The accompanying music was a chorus of whines and cries as the boys had “tired themselves out” in the unusual show of sunshine, and were basically at the end of their ropes. During the walk back home, the boy did pick one of the Mother’s first blooming Daffodil’s in the front yard and presented it to her.

It is believed that the socks were initially soiled at a playground, not too far from the school. When asked “where on earth did you get these socks, and where are yours?” The boy responded that he didn’t know. He left the house at noon, late from a busy morning of playing, as usual, wearing his plain white socks with HANES clearly spelled out in red letters.

The mother of the boy is guessing the sock-exchange occurred sometime during afternoon kindergarten between 12 and 2:50. The mother of the girl of the missing lavender-trimmed socks has yet to be identified.

The mother of the boy is considering rounding up a few Knights who can canvass the school, asking the little girls to try on the socks to see which foot the socks belong to. Once found, she’s considering taking the two out for a celebration Banana Split, the boy’s favorite dessert, at the play area of the local Grater’s Ice Cream.

Anyone with information regarding the rightful owner of the sock can respond in the comments section below. 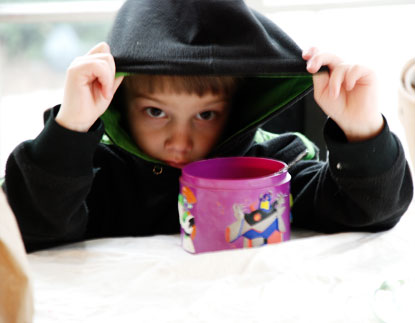 Also, April is poetry month, and I have just the perfect poetry book that will excite every boy.

Here Comes The Sun
R...
All That Were Left
I...
All I Want For Christmas
i...
Buckeys look like this
...
Waiting on the Fort
T...
Fast and fresh with lots of Freckles
T...
Share on FacebookShare on Twitter
best shot, clean, Laugh, Life
22 comments to “The boy wore these dainty socks”