The flu has arrived here — we have no idea if it is H1N1, or if there is something worse yet to come. But it doesn’t really matter. We are alive, and we’re all taking very good care of each other. We started with the herbs right away and the Oscillo stuff seemed to help the most. Although the sickness seems to have affected the grownups less severely than the little ones. In fact, it is the littlest one who is the sickest. His cough is so persistent and you can see in his eyes just how worn out he is from coughing. He evokes pity.

Last night, a friend stopped by, a FEMALE, to bring me a present (fresh greens and beets) and after she looked at him we talked about his “color” and I just had a flash of a memory of what it was like when I had a mom and a grandma and aunts around to discuss such things as color, coughs and temperatures. I miss that. Just having someone else around to carry the worry, without being asked, just because it’s what we do naturally. Never once did I ever imagine there would be at time when I would be without those people in my life. These kinds of conversations are gone when you’re living in what another mom of boys calls a “Frat House.” So nice to talk to someone who speaks that familiarÂ  language I grew up with, the one of color and temperatures.

Nothing seems to help his cough; although there was a glimmer of hope last night when he only woke me up one time with a cough that wouldn’t quit — that was at 5:10 a.m. I hope this is the worst of it. Before we went to sleep, I told the bigger brother, “Don’t turn on your light when you wake up, so little brother can sleep.” At breakfast, he said, “I remembered to keep the light off, Mom.”

To pass the time, the little guys have been busy building legos, and I made them some pumpkin-colored playdough. 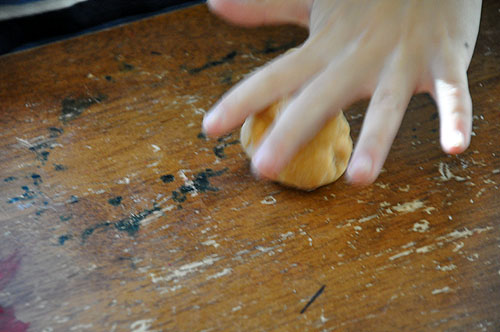 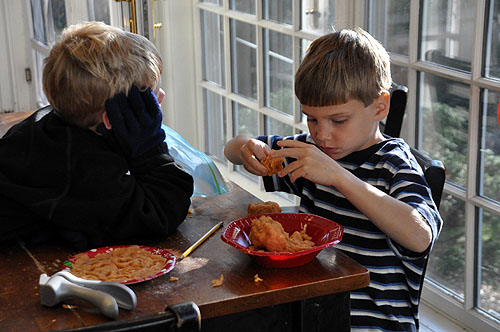 That beautiful orange color is from the addition of Paprika. 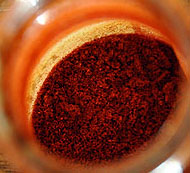 Grandma’s Button Collection
H...
I Don't Mean For This to be Sad ...
W...
Flaxseed Crackers: You Can Do This At Home
H...
Lavender and Cedar Are Enough For the Moths
A...
Waiting on the Fort
T...
I Wanted to See His Name... Not Just Touch It
"...
Share on FacebookShare on Twitter
memories, Tears, Try This
One comment to “Talks about color and temperature”