“I’m walking out the door. If anyone wants a ride, meet me at the car out front.”

Three boys pile into the car. One is missing.

“He’s looking for his green sweatshirt.”

“I need to wait on your brother.”

“Give me a piece of paper, write yourself a note, and I’ll sign it.”

Clearly, this boy is not coming out of the house, so I began the trek to three different schools, dropping them off by the bell schedule. The first bell to ring gets dropped off first.

On the way to the elementary school, I call home to talk to the one son left there. He’s in third grade. He won’t answer the phone.

“Oh, I see him, he’s under the coffee table in the living room.”

“What’s he doing there?”

“He says he’s not going to school without his green sweatshirt, and he can’t find it.”

“He hasn’t had it in over two weeks, what difference does another day make?”

“He says it’s been ELEVEN days, and he’s putting his foot down.” 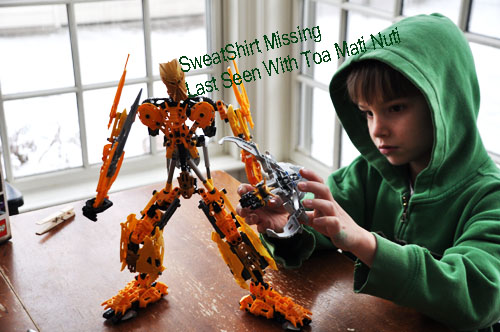 “Can you just deal with that? I’m dropping everyone else off, and they can’t be late, and I have a writing deadline at 9…etc”

I came home 15 minutes later to a blessedly, empty house. Somehow, he was convinced to go to school, without the sweatshirt. I’ve looked everywhere, and I can’t find that sweatshirt.

Productive
D...
Keep Out!
I...
We Just KILLED One of Your Stories
I...
This is the school nurse: your child's not feeling well
T...
Empty Handed
...
Just Two Short Years Ago
Y...
clean, Laugh
2 comments to “Sweatshirt Drama”