While we were staying at the hospital for our 23 hour tour, he was not allowed to eat. Surgery may have been eminent. His IV was hooked up for fluids (spare me the memory of watching him squirm and cry while his vein “blew” three times just trying to place the IV). 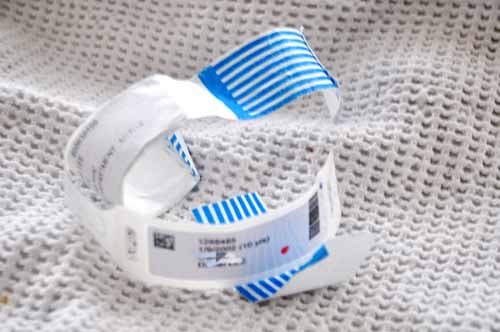 The next morning, it had been 18 hours since our last meal. I was ravenous… but I didn’t dare ask him if he was, for fear of inciting latent hunger pangs lingering in his tummy, just below the surface. 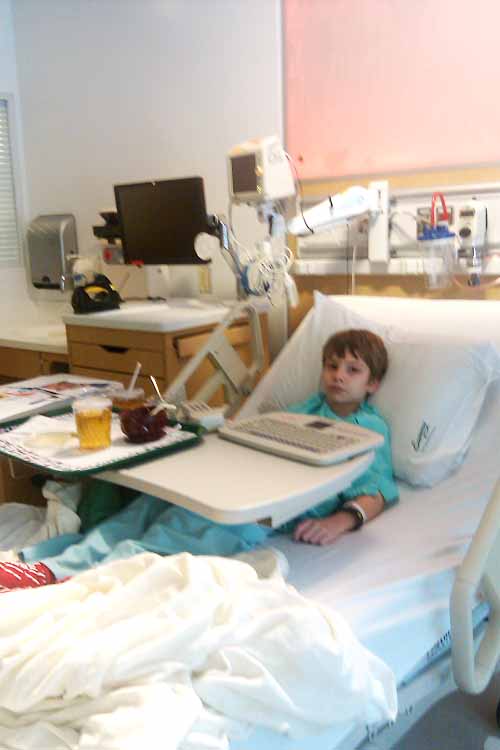 Mamma’s gotta eat… I needed my strength for whatever else would be laid out in front of me for the day.

I took a stroll down to the hospital cafeteria. This was a far walk… I had planned to eat down in the cafeteria, but it was so far — I couldn’t leave him alone that long. So, the plan was to eat in the room — with him — so I had to pick out something that would simply repulse him. That would be easy — he’s a picky eater — the vegetarian that doesn’t eat vegetables.

I scanned the salad bar, the soup kettles, the vending machines full of partially hydrogenated oils (his favorites!) and the clear plastic containers of tuna sandwiches and wraps. Soon, I spotted the perfect meal. Sushi. He hates Sushi. Â And this wasÂ Hospital Sushi. I hesitated myself… but, hey, the word “hospital” in front of sushi would be the ultimate sacrifice. Nothing says Mommy is sacrificing too, like “hospital sushi.”

So, I carried my plastic tray of Hospital Sushi, and a cup of green tea back into room 523, where my son sat waiting, already glued to a video game of tic tac toe on the flat screen TV above his bed.

He noticed. “Is that urr lunch?”
“Yeah,” I said, and quickly followed up with those revolting words, “Hospital sushi.”

Without missing a beat, he looked up at me with his pitiful brown eyes, and said, “Can I have a tiny speck of your rice?”

I will add that that pitiful tray of Hospital Sushi was the worst meal I’ve ever eaten in my entire life. I couldn’t even finish the thing.

Within an hour, the nurse announced it was time for him to eat. This is what he ordered off the hospital menu:

The food came. He was busy eating. In silence. When the nurse came in to check on him, she said, “How’s your food.”

He mumbled, without looking up from his plate, “It’s dewicious.”

And he ate every tiny speck of a crumb.

Chalkboard from Ugly Print
T...
I'm Scarcity Conscious
I...
Dear Dad, You Touch My Life in a Thousand Little Ways
A...
Notes From Camp
T...
Good Morning Grapefruit, Carrot and Ginger
T...
The boys have lost most of the pieces
...
Share on FacebookShare on Twitter
clean, Laugh, Life
One comment to “Hospital Sushi”