So, we dived back into our Advent Activity box last night. Catching up on all the things we said we wished to do, but didn’t. One of them was to watch The Star of Bethlehem.

We finally watched it last night. At last, I hoped, I could put this issue of the star to rest. Did it really happen?

By the end of the movie, I was trembling, a bit. We learned far more about that star than I ever dreamed possible. Will we see it again? I highly doubt it. As you’ll see here, this was a once in a

Astronomers have developed software that allows them to calculate the precise location of stars that will be visible in the sky at any given point in the future. They can also show us what the sky looked like at any point in the past. The celestial objects move like clockwork against the black night sky. Predictable, and reliable.

It didn’t take long before researchers started to use this software to see if they could try to discover some clues about this mysterious Star of Bethlehem. Did it actually exist? What could the wise men possibly have seen with the naked eye?
Using historical records, researchers and scholars have been able to pinpoint the death of King Herod, which coincided with the birth of Jesus. We also know that the Wise Men were the first to know that this star was coming, as they had access to the clues of 700 year old documents, from the prophet Balaam. (See Numbers 24:17) The wise men were wise. Educated astronomers and astrologers, who had been studying signs that would give them a glimpse into future events.

Mention of the star appears hundreds of years later in the New Testament when Matthew records what happened at the birth of Christ.

“When they heard the king, they departed; and behold, the star which they had seen in the East went before them, till it came and stood over where the young Child was.” (Matthew 2:9)

Note that Matthew writes that the star stood still. Hmmm. Stars don’t stand still. This could create a puzzle for the researchers. But it turns out to be one of the very keys to unlocking this mystery of the star.

I am going to try to simplify here information that has been thoroughly researched – although, please know that there are several layers to this information, and I encourage you to look for yourself in the following resources to find the technical, in-depth research to support these theories, including the work of FA Larson, and the work by the modern historian, Dr. Ernest L. Martin through his books, The birth of Christ recalculated (Scientific & historical series) and The Star That Astonished the World

, as he consulted NASA’s record of lunar-phase tables.

Let’s look at another clue in Revelations about the birth of Christ:
1 A great and wondrous sign appeared in heaven: a woman clothed with the sun, with the moon under her feet and a crown of twelve stars on her head. 2 She was pregnant and cried out in pain as she was about to give birth. 3 Then another sign appeared in heaven: an enormous red dragon with seven heads and ten horns and seven crowns on his heads. 4 His tail swept a third of the stars out of the sky and flung them to the earth. The dragon stood in front of the woman who was about to give birth, so that he might devour her child the moment it was born. 5 She gave birth to a son, a male child, who will rule all the nations with an iron scepter…— Revelation 12:1–5

I’ve always assumed these references were allegorical. But researchers have found that this passage perfectly coincides with the constellations that appeared in the time of Christ’s birth.

Doesn’t the Bible warn us about the study of astrology?
Look at this passage in Job:

He is the Maker of the Bear [Ursa Major] and Orion, the Pleiades and the constellations of the south.— Job 9:9

And this one in Isaiah:

Lift your eyes and look to the heavens: Who created all these? He who brings out the starry host one by one, and calls them each by name. Because of his great power and mighty strength, not one of them is missing.— Isaiah 40:26
And again in Luke:

God not only created the stars, by he has arranged their order and named the constellations. (The Bible does warn against star worship in Job 31, and Deuteronomy 4.) 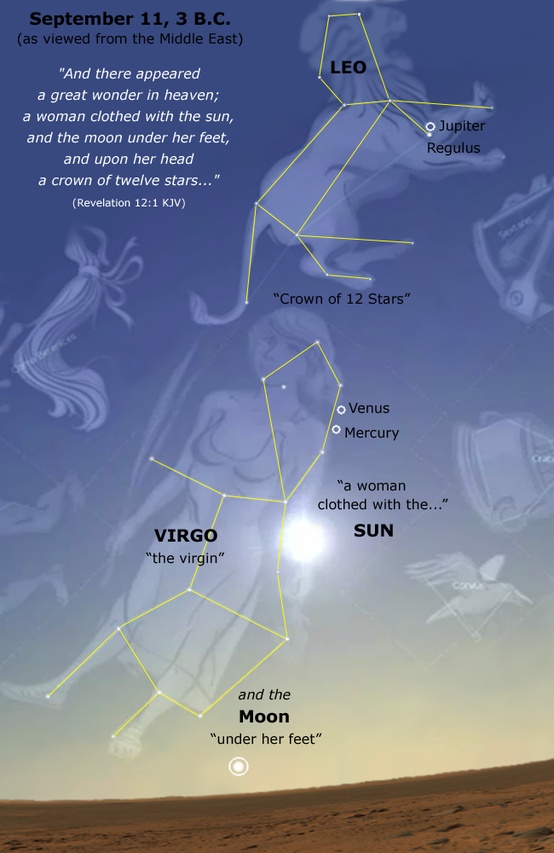 So, what do these symbols/constellations mean? In the words of Dr. Martin:

Up in the sky, in 3 B.C. the constellation of Leo (the “lion” being the symbol for the ‘tribe of Judah’) would have been positioned just above Virgo (the “virgin”) in the eastern sky. Leo contains many bright stars (12-15), such as Regulus (the “king star”), with a total of nine primary stars that are typically used to depict it. Along with the planets of Jupiter (the “king planet”), Venus (the “mother planet”), and Mercury (the “messenger of the gods”), which would have been known to the Magi from Greek mythology, were also visible in close proximity to Virgo. Any combination of these “heavenly bodies” could easily give us a total of twelve “stars”, or the “crown of twelve stars” also referred to in the verse from Revelation, not to mention their astrological significance when compared in relation to this story.

When Jupiter and Regulus were first meeting, Virgo rose clothed in the Sun. And as Revelation said, the moon was at her feet. It was a new moon, symbolically birthed at the feet of The Virgin.

“In the year 3 B.C.E., these two factors came to precise agreement for about an hour and a half, as observed from Palestine or Patmos, in the twilight period of September 11th.” And that, “This is the only day in the whole year that the astronomical phenomenon described in the twelfth chapter of Revelation could take place.” He also records that he can find no other dates when a similar type of alignment may have occurred.

And there’s more: Remember, the wise men visited Jesus when he was a toddler. So, nine months later, Larson found that Jupiter played a “star role.”

“The Planet of Kings (Jupiter) traveled on through the star field toward another spectacular rendezvous, this time with Venus, the Mother Planet. Jupiter appeared to join Venus. The planets could not be distinguished with the naked eye. If our magus (wise man) had had a telescope, he could have seen that the planets sat one atop the other, like a figure eight. Each contributed its full brightness to what became the most brilliant star our man had ever seen. Jupiter completed this step of the starry dance as it was setting in the west. That evening, our Babylonian magus would have seen the spectacle of his career while facing toward Judea.

Remember how the star stood still? Stars periodically appear “to reverse course and move backward through the other stars. On December 25 of 2 BC as it entered retrograde, Jupiter reached full stop in its travel through the fixed stars. Magi viewing from Jerusalem would have seen it stopped in the sky above the little town of Bethlehem.”

(This is not the birthday of Jesus – researchers attribute that to September 11. December 25 is when the Magi arrived to see Jesus. Just so you know, you can also find similar stunning references when you start to look at the sky on the date Jesus was crucified– complete with the Blood Moon…)

So, there is the whole package of the star – far more than you, or I, expected to learn about the night sky over that little town of Bethlehem. I, in fact, am still shuddering over how precisely real those words are back in Genesis I that records how the stars were created on the vault of the sky, “as signs to mark sacred times, and days and years.” Marking sacred times, days and years. A blueprint for our lives, here on earth, painted on the vault of heaven.

Officially, I'm Not Waking My Kids Up Anymore
T...
So, you're having a boy?
...
When The World Spins Out, and You're Not Moving
S...
Jockeying for Presents
...
Cookbooks as Treasure Maps, and the Healing Power of Pie
E...
You're not cheating your kids are you?
B...
Share on FacebookShare on Twitter
holidays, Life, Science, spirit