It’s very hot. The temperature is soaring into the 90s. These are the kind of days that I think you can fry on egg on the sidewalk. Tonight, my 10-year-old had football practice from 6-7:30; I made sure he had two very cold water bottles to take to practice. 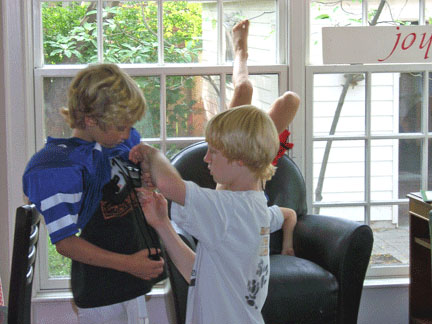 After dropping him off at the park and saying Hello to the coach, I moved on to my oldest son’s soccer game, already underway. I wasn’t there five minutes before my phone rang; a friend, a Dad from the football team said “Your son is OK… he’s in my car… he’s just pretty sick.”

My husband was already on his way to the football practice; so I called to give him the heads up. We learned that practice started by having the kids run sprints. In this heat. The coach said this to the parents after practice:

“Some of the kids got pretty of sick tonight. You’re just going to have to tell your kids they have to work through it.”

Third and fourth graders need to work through it? For what?

There was a time, OK, maybe there was never a time, when I listened to the coaches, we didn’t miss practice, and we took all of this soooo seriously.Â  Now, I could really care less what the coaches think.Â  Especially after comments like that one that was made tonight.

My son wants to play football; as long as he wants to play, and he’s having fun, we’ll get him to the practices and the games.Â  But, we will not kill ourselves to do it — just for the sake of the game.

Outside The Backdoor
I...
He's Buying her Christmas Present
Y...
Everything In Its Place
A...
Loser's Trophy
T...
Finding Paradise
...
Brownie was loved
...
Share on FacebookShare on Twitter
clean, health, Life
10 comments to “Sprints in this heat?”