When I expanded the Jack in the Beanstalk bean fort this year, I used corn to fill in the walls. Farmers sometimes plant beans around the corn, so that the beans can grow up the corn — the beans are legumes, and they feed the soil. 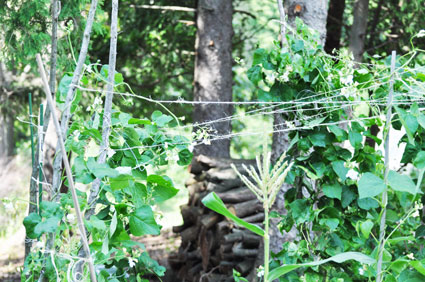 This has proven to make great walls for the fort, but one element that fell through the cracks was the ceiling. With the “walls” spaced so far apart, it was difficult to imagine vines that could reach the top, and then across to the other side – even though, logically, I knew the Jack in the Beanstalk variety does grow to 21 feet.

As a result, the beans have grown to the top of the poles, and then, continued to drop down and vine around the same pole. This has not created a “fort” but an actual garden, and the kid’s have not even acknowledge this fort’s existence, like they did last year. 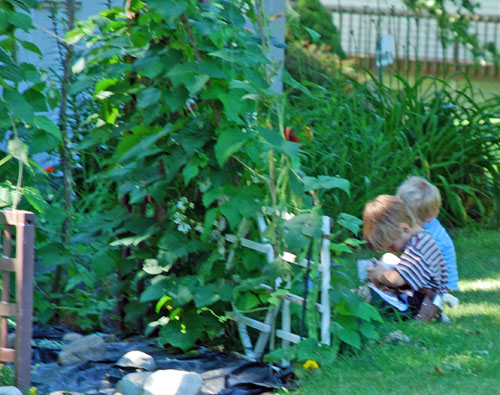 Kids need a roof over their heads before they can transform a space into something magical. So, pulled out the twine and started tying lines from the top of one pole to the next. Then, I found that I was a bit too late in my plan, as many of the vines had twisted themselves so tightly back down the same pole. If I had started this process a few weeks earlier, I would have had a true green ceiling by now.

The beans revolt against me whenever I do this, but I did it anyway – I began to untwist its curls and vines and re-aligned them to vine around the twine of the ceiling. In their protest, many vines have since wilted and died — but that only seems to make the plant spout a new stronger vine. Some are taking the plunge and making the journey across the top.

This should be good for the beans, as sunlight will be much easier to reach from here, than rather dangling down on an already-too crowded pole. Not to mention, making it much easier to pick the beans. Finding the beans in this jumble is more like a scavenger hunt, as the dangling beans blend so well with the vines, and are hidden by the leaves. The kids love going out to pick them when they’re young and small, as they taste so sweet right off the vine. 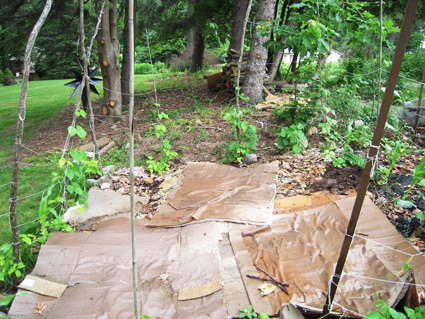 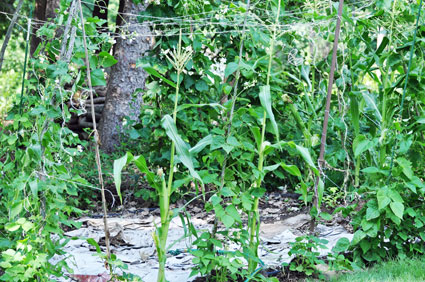 Soon, we’ll be picking beans from the ceiling, and there they’ll be much easier to find. 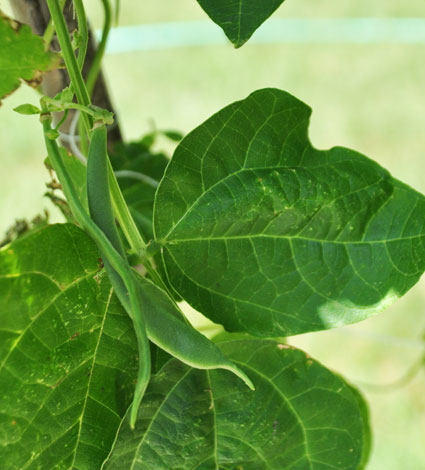 Lake Effect Snow
W...
Please don't tell me you took the till and ran
T...
Found: Vintage Signs
I...
The Pretty Spring Centerpiece You Already Have
...
Those boys have been awfully quiet...
...
When The Sun Kissed Us All Day Long in Winter
R...
Share on FacebookShare on Twitter
Gardening, the lake house
5 comments to “Soon, We’ll be Picking Beans off the Ceiling”