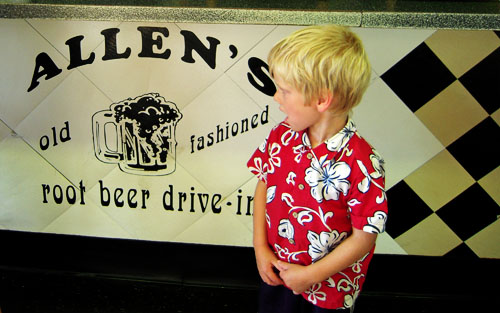 Just a little bit North, south of the TAXI, there is a wonderful little town that has managed, despite the presence of Wal-Mart, to keep its thriving downtown identity. There is a movie theater, a barbershop, a new coffee shop, two Family Dollar stores, and most importantly a real-live root beer stand.

I mean a REAL one. Girls come out to your car to take your order, and attach the tray to your car window with the food.

When I learned about this, I decided to make a whole evening of it. Taking the boys to see a part of my history, all the while, enjoying a large frosty jug of old-fashioned root beer.

Things began to look a bit sour, however, when I called the boys to get in the car to announce that we were heading to the root beer stand, and they all said, “We just drank the root beer that was in the fridge.” 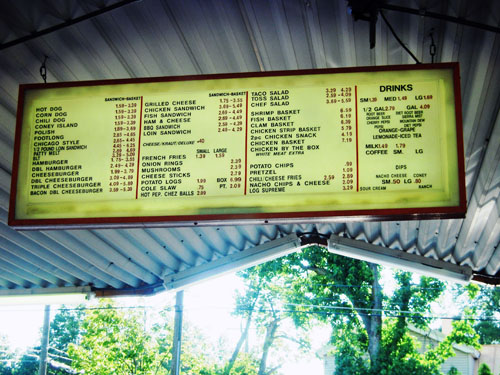 I was most impressed with the fact that there were no bird’s nests in the rafters. Definitely a clean and tidy joint. 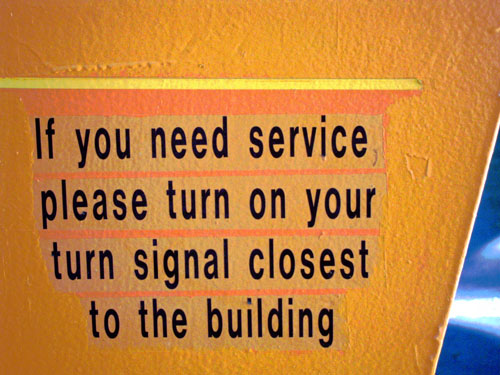 The kids all wanted corndogs, in a basket, but no root beer. Instead, they wanted Orange Slice. I tried to reason with them… but it was a hopeless cause. Have it your way. 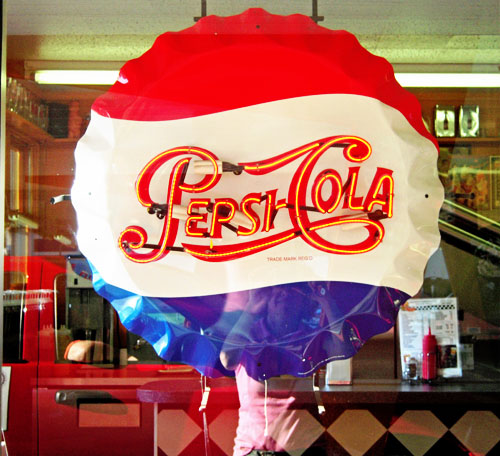 While we waited for the food, I anxiously looked around for “The Fonz” to appear. He didn’t. He could have been in that red truck next to me, as I did have trouble getting a good look at those people through the tinted windows.

When the food came, the girl attached the tray to our window – actually to the passenger-side window, so that my son could pass out the food, while I used the town’s local wifi service to check my emails. He hated doing this. Kids were pestering him for stuff the whole time – straws, mustard, napkins, and “I want my drink now.” I’m always careful about making sure my kids get the “full effect.” 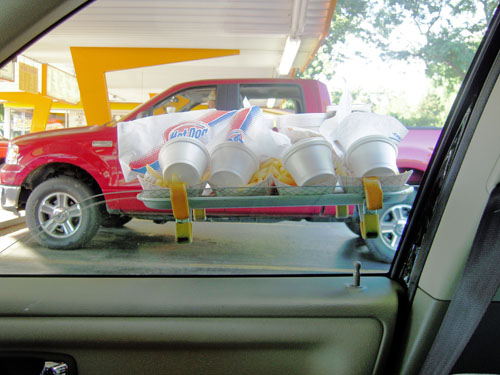 The kids, un-used to eating in the car the way civilized children of the 60s and 70s did, complained about the car being too crowded, stuff dropped on the floor, and there was no place to put their drinks that they could reach.

The greasy food, I will admit, did little for our stomachs. They all had a case of diarrhea about an hour and a half after we left.

Next time, we’re going back for the drinks only; and I’m hiding the root beer, DAYS before we go. 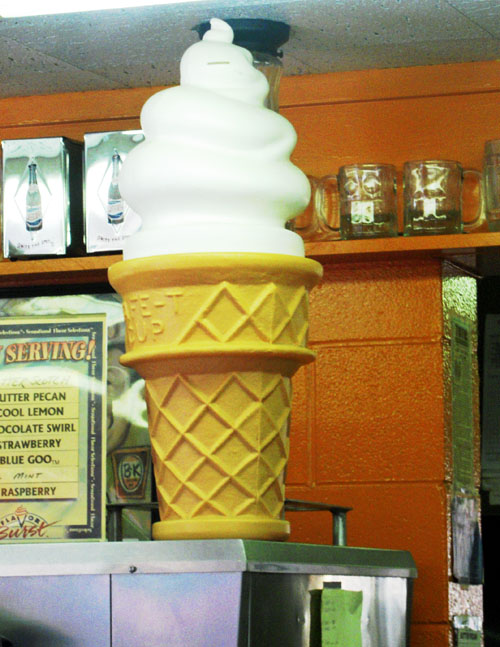 Soon, We'll be Picking Beans off the Ceiling
W...
You're not cheating your kids are you?
B...
When He Has A Sharpie in His Hand
I...
Oh, The Oddities You Can Find By Walking Around on the Ground
R...
Trap
W...
Mix One Bottle of Champagne
w...
Share on FacebookShare on Twitter
clean, Laugh, memories, the lake house
One comment to “Sometimes my kids can be wet blankets.”