My Uncle has a way of conveying, without arrogance, his wisdom from his 80-plus years of living, in a gentle way. He bestows his knowledge quietly, without force, and only years later, if you were smart enough to put his advice to work, do you realize you have been given a gift that continues to multiply in benefits

I transplanted my grocery bag plants three weekends ago at the lake, during 20 mile per hour winds. In the beginning, I planned to be neat and precise; making distinct rows and covering each row with weed cover in a methodical system. But after the wind blew sand into my eyes enough times, I gave up, settling for the fact that at least the roots were covered, and the rows were straight — but not neat. The wind and the cold tired me out, and by the time I was finished, I didn’t bother to cover the plants with chicken wire for added protection. I did leave behind a few boxes of Irish Spring Soap, but that was about it. And then we left the plants alone for three weeks to fend for themselves against the elements. 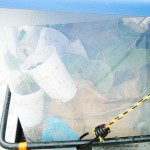 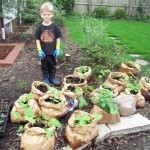 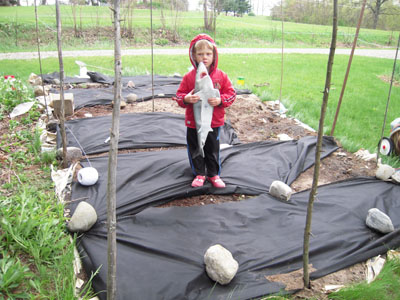 Yes, that is a shark that my garden assistant is holding.

When I arrived Memorial Day Weekend, I was surprised to learn that the plants did survive, as the pests left my plants intact. However, the leaves on my plants were yellow and dry. Spring rains did not come. The soil at the lake is sandy, and holds little water. When Uncle Bud arrived, a day ahead of me, he took the time to carry buckets of water from the lake, all the way up the hill to water my garden. “Lake water is better than any water you can get from your hose.”

Later, my uncle pulled me aside, and said, “Where are all the leaves you bagged?” They’re still in bags, still decomposing.

“Get them out,” he said. “The leaves will hold water and keep your plants moist.” Then, in a tone a father reserves for when he’s about to tell his child that a beloved pet has died, he begins, “Well, you see, Susie, when you have a garden, you need to be there… you know, water it everyday. It’s kind of hard to keep things going when you’re not here. Your garden is fine, but remember, it’s going to need some extra help when you are here. And you need to start saving your kitchen scraps… you need to build… some soil.”

His kindness always touches me; the way he offers advice without offending. He could have said, “Gardens don’t make it when you’re not here to water it. So, why put yourself through so much trouble, and give up this crazy idea.” But he didn’t. Instead, he watered my plants himself, with lake water; this required great effort on his part, as the garden is up the hill, away from the lake. He has faith in the plants too, just like me.

He has gardened more years than me, so I dumped my bags of leaves on the soil around my plants. To keep the leaves from blowing away, I covered them with the cardboard that wasn’t used for the boy’s fort. “Cardboard will help,” he said. “Holds the moisture, and attracts the worms you need.” 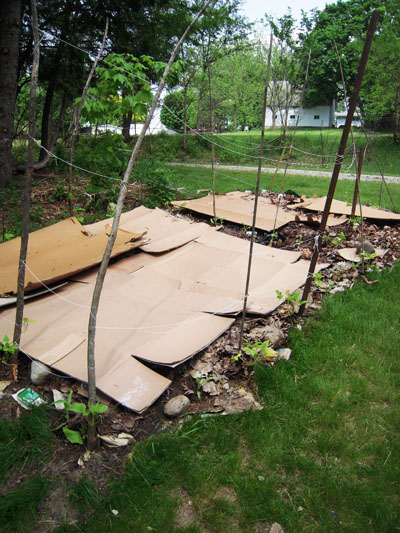 But cardboard doesn’t look “nice.” Still, I can’t argue with the fact that while I’m not here to tend to the garden, the cardboard can hold the moisture.

By the end of the three-day weekend, the leaves were starting to brighten to a lime green, rather than chartreuse. It’s not a pretty garden, but as soon as the green beans and corn start growing around the walls of the fort, things will begin to look lush and full; just as they did last year. I even spotted the beginning stages of a bean. 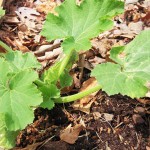 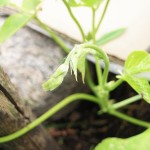 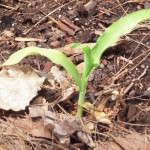 I think my uncle – I claim him as mine, but he’s really my husband’s uncle — is so patient with his advice is because he is not attached to the outcome. He could really care less whether I add the leaves or not; nature will teach me what I have yet to learn. He’s free, like the Buddha. A quality I’m sure he didn’t set out to acquire; but one that grew with the failing rain, over time.

Someday my garden will be pretty; but for now, we’re busy building the foundation.

What Are You Doing In My Pantry?
I...
Friday Night At the Lake
...
The Easter Swan
T...
Warm Weather Flashback
I...
I Was Never Really Sure If It Was Real or Memorex
I...
Getting Lost In The Country
O...
Share on FacebookShare on Twitter
Gardening, the lake house
2 comments to “Someday, I will have a pretty garden”