I know You’ll probably be disappointed to hear this, but we went ahead, without you, and power washed and stained the deck. 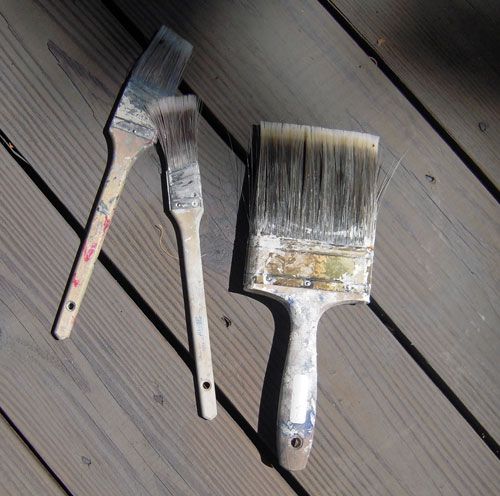 I know you were hoping that we’d wait and save that job for when you came up for a visit. Such a big job deserves a “beer-and-pizza-party-let’s-chip-in-and-help” kind of thing. Yet, the truth is, there are just some things a family needs to share amongst themselves. Some things are just so intimate that they really are meant to stay private. Treating the deck is just one of those things.

I’m not sure of the exact square footage, because there are lots of “sections”, but I will say that it takes 14 gallons of stain, and there are 318 rails, times four sides — so 1272 sides of rails to cover. With a brush. By hand. 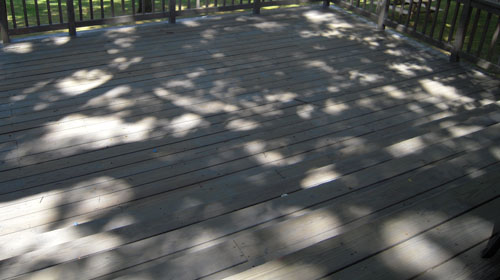 At first, when I started brushing the rails with my two oldest sons, our heads close together, working closely to get that brush to cover every single inch of surface, we talked about their life goals (painting as a career choice didn’t come up), dreams and aspirations. Later, we’d learn just how far downhill those conversations would go, as the day carried on.

The three of us expected to complete one large section of rails a day, which would take us 8 days complete the entire deck. Dad had already covered the deck surface with a 6” brush attached to a long pole the day before – in about five hours. But with the sun shinning, a slight breeze wafting through to dry the deck – we decided to just plow through and get the rails over and done with. 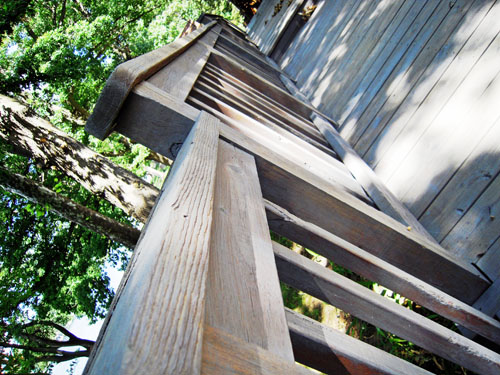 I’d look down that little section of rails, and think, “with three brushes working, I’m sure we can have this knocked out in five to ten minutes tops.” Brush the oil stain on three sides of the vertical rails on this side; one side on the horizontal. When you move to the other side, you have one side of the vertical rail, and three sides of the horizontal.

Somehow, before you’ve even realized what’s happened, that section of rail turns into Route 66; you’re out in the middle of the desert, and you have no idea where you are or even IF you’ll find you’re way back. Five minutes is now forty minutes – in deck stain time.

My children have dropped out of sight; maybe they’ve run away from home from the sheer terror of this job I’ve laid out in front of them.

Meanwhile, I’m still brushing along with my husband. Boats and water skiers are whizzing by in the background. Actually, it’s quite easy to ignore them. Even though they’re in my front yard; they’re as far away as Jupiter. I have only one goal in front of me; and it’s as clear as daylight: brush three sides as quickly as possible and keep moving down the deck. 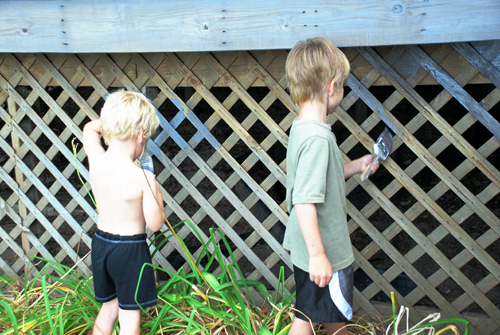 All I can think about is how much I’d like to get my hands on the person who thought it was such a great idea to build a deck so freaking big. Now I can clearly see why they sold the place.

I look up, and thankfully see that my children have not run away from home. I can see them through the kitchen window; they’re working their way through that tube of chocolate chip cookie dough I stashed in the freezer for emergencies. This wasn’t the one I had in mind. I get the will to call my two oldest boys back to help us. They oblige us for a while.

My husband needs food. He stops to fix a meal – sustenance for all of us – cereal with milk. I can’t stop to eat. The paintbrush is stuck to my hand. Foolishly, like a mirage in the desert, I believe if I keep working while they’re eating, I’ll just knock out this one whole side of the deck. It doesn’t happen. By they time they’re done eating; I’ve only moved three rails ahead.

“I have a thick brush that is perfect hitting the top of the rails. This brush sucks on the rails.”

These conversations are evidence that this deck job is one that is just better kept within the family.

But the deck never ends. Neighbors on the lake walk by, and tell us “How great the deck looks!” “Thanks,” we say. Then it dawns on me that they’ve pretty much heard “everything else” that’s been said on the deck today – water in the lake carries sound so well. Then, I realize they’re “lake people.” Lake people understand jobs like this. They’re like your college roommates. They see you at your worst – and still, it doesn’t matter.

Finally, I can’t take it anymore. I beg my son, who has just finished off the whole package of cookie dough, to please make me a peanut butter and jelly sandwich. “And wrap it in a paper towel so I can hold it and eat it without getting stain all over the bread.” He also brings me cups of iced tea in Styrofoam cups – I toss the grey finger-painted stained cups on the ground as I continue to brush.

By 8 p.m., we’re done. Instead of being elated, we’re so ticked off that this damn job took so fricking long that it literally robbed us out of an entire day. Worse – the kids expect us to feed them… again.

Next time, I’ll let you know when we’re doing the deck, so that you can plan accordingly. 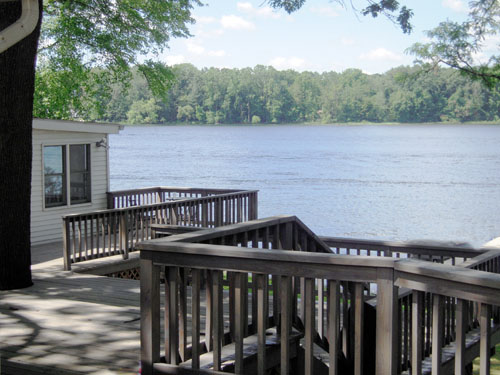 Perpetual Bone Broth For The Winter of Our Discontent
T...
The Truth About My Slalom Trials
T...
That Flush of Spring Break is Over
T...
I Wish All Trees Were Evergreen
S...
You know you're a Mom when...
Y...
Board Game Stress
P...
Share on FacebookShare on Twitter
Laugh, the lake house
5 comments to “Some things are just better kept within the family…”