‘Tis the season, right? So, that’s how we Â ended up hosting a Christmas party this Friday night. Decided on Tuesday… this Friday. Crazy and twisted. But, tis the season. We’re at this awkward stage when we still have little ones who expect all this fancy Christmas tradition stuff — but not too young to prevent me from doing extra stuff.

Did you know I was in a Bunco group? I am. And this year’s Christmas party was an orphan — it had no parents. And this Friday night is the big night in the mallway with the Ice Sculptures, the Carriage Rides…it’s all very Charles Dickensy. And normally, we head into another friend’s house for dinner, after the host “forces” us out of her house into the cold streets to see the ice sculptures, and reindeer, (they are caged) and Santa. But this year, our friend is in Napa. So, no warm dinner to warm up to after seeing the ice.

So, I invited just a couple of friends over for “after” the ice. Then one friend said, “should I just invite the whole Bunco group?” Because that would mean, with husbands, and double the number. “Oh no!” I said, as I looked around my backpack strewn kitchen, with half-opened tubs full of Christmas decorations, sticky floor and counters.

Then, she offered help –as in, I don’t have to do all the food prep — because, you know — it’s last minute and everything. So, I got busy on Pinterest and created a party board, (would you expect anything less?!) Â and started collecting recipes, and centerpiece ideas. 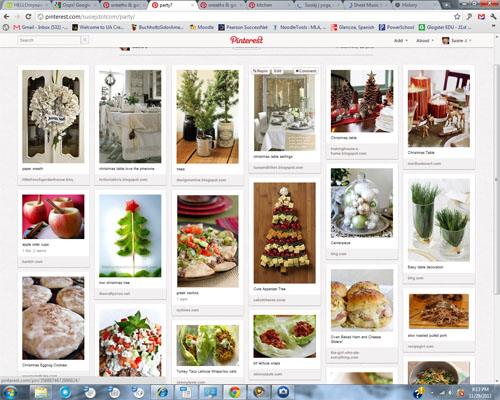 I told my friend, “OK… I can handle the apps (that’s short for appetizers) but I can’t do cookies this quick. Because Christmas cookies take extra fuss. So, the invitation goes out — bring cookies — or wine. We won’t know the difference.

Then, I called my other girlfriend, and broke the news — “you guys are coming here Friday night.” She laughed, and said, “I was going to offer to host it.. but I’m two months away from that.” (She just moved.)

“That’s OK. You can do Valentine’s Day. Â But anyway, I think I’m ready, because I have the wreath on the door and everything… but I just wish I could figure out how to make those confetti-looking trees that came out on Anthropologie today….” 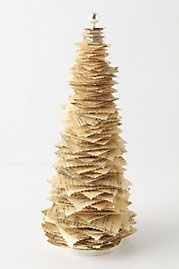 I was kidding, you know. But it would be nice.

She said, “Hmmmmmm. Sounds interesting. What day are we making those?”

My girlfriend was serious. And she is VERY crafty. I realized I had a bite. I LOVE friends like here. She fills me up! Â “Well, the base is hard to figure out — not sure how to make it work.” She asked me to send her the link.

So, in addition to cookies, and just make have some adorable trees by Friday.

Waiting on the Fort
T...
When The Crows Come To Roost by The 10,000 -- the Town Dances
H...
All I wanted was a simple white paint…
...
The After-Christmas Hush
I...
Time Lapse Chalkboard Art
I...
What Moms Don't Tell
H...
Share on FacebookShare on Twitter
Household, Laugh, Life
3 comments to “So What Day Are We Making Those Trees?”