My phone was ringing. Which was odd, because the plane I was sitting on was approaching the runway, and I had tied every knot, and tied up every loose end, the best way a mother of four boys could, before I boarded the plane. Then, I saw the name of “Ruri” my second oldest son, on the screen. Why in the world would he be calling me now?

Of course this was important. Of course, I didn’t even hesitate to answer the call, despite the clicking of seatbealts, and the roar of the plane engine. Really, I can’t imagine how things wouldÂ have went if I didn’t, so it’s lucky he caught me when he did.

It was about 40 minutes before school was about to start. We had woke the kids up an hour earlier that morning, as we were leaving the house for a trip to Las Vegas. In the hour before we got the kids up, we had fed Rosie, and let her out, and I had left a plate of warm waffles for the boys.

The boys were all set — all they had to do, pretty much, was walk out the door and head to school. The babysitter would be there as soon as they arrived home that afternoon.

Except, my phone was ringing. Rosie was “puking” all over the house. On the rug in the kitchen. On the rug by the front door. And of course, in Ruri’s bed.

The next few minutes were surreal, as time seemed to stretch as slow as molasses, as we all transferred an inordiante amount of information in these few minutes before our plane actually left the ground. 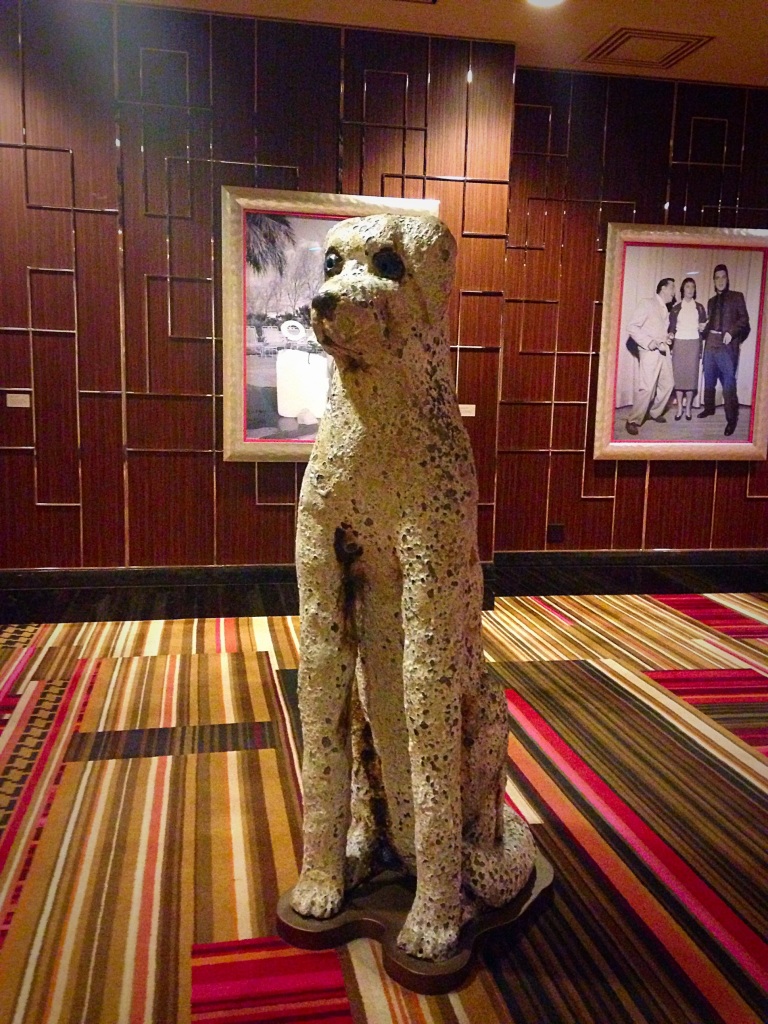 A picture of the 5-foot tall concrete dogs that were standing in our hotel lobby in Las Vegas, which actually turned out to be quite fitting to this story.

I was able to talk to each of the three sons and discover that each was adamant about not cleaning up once ounce of puke. After a calm talk to each one of them on the amount of stench that would be waiting for them after school if it was not cleaned up right now, we then moved to a disccusion about the appropriate amount of puke each one should clean up, and how to do it. Like mother like son, they already found my enzyme cleaner and were ready to get to work.

We still had time to turn our attention to Rosie. The phone connection was still live. What was wrong with Rosie? And we realized she may have gotten into the chocolate, from Halloween. And Ruri, sweet as he is, calmly said to me, “Should I give her some activated charcoal?” I can only imagine what the passenger seated next to me on the plane, who managed to smuggle a bottle of diet coke on the plane, thought when he heard me say, “Activated charcoal!?”

“Yes,” Rurie explained. “It’s suppossed to help dogs who eat chocolate.” He already had time to look this upon the internet. “Hmmm,” I pondered that, and then I burst out, “Yes, I have some of that!”
“Where is it?”
“Top drawer of the bathroom cupboard — first floor.”

Then, Ruri and I both decided that it would be best for Rosie to spend the day in the backyard, with the door of the screened porch open so she could get in and out, while my husband texted our neighbor to ask him to check on Rosie throughout the day.

I can only imagine what the neighbor thought we he saw Rosie’s water bowl, full of black, charcoal-colored water.

Fast, New Yummy Way to Cook Steak!
O...
How Long Before School Starts Again?
I...
Don't even try to grocery shopping without
t...
Laughing at Our Tears
I...
A Bug-Free Picnic: Flies AND Ants
S...
YOUR CAR HAS A CABIN AIR FILTER-- AND YOU'RE SUPPOSED TO CHANGE IT!
I...
Share on FacebookShare on Twitter
clean, Laugh, Life, travel