I don’t know why, I just felt that it had been awhile since I talked to him last. Purely as a whim, with nothing in particular to say, or find out, I simply picked up my phone and dialed him, at his office, in Detroit. 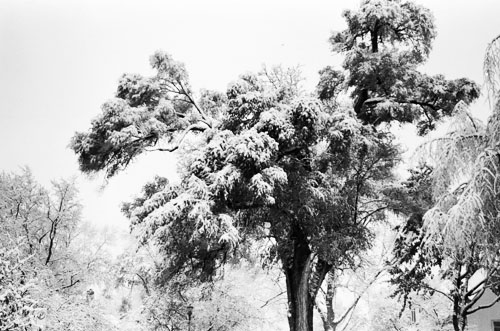 This photo, ironically, was taken by my son — not the one in college — the sophomore. The one who really is Batman. He had his photography-class-issued-DSLR in the car on the way to school, and we saw this magnificent display, which he snapped with his camera. Took me forever andÂ a day to get the negatives from him so that I could convert them to a digital image to share with you here…

What I heard in the phone, set me back. In his voice, was a perceptible relief. As if somewhere, in the back of his mind, he had been waiting on my call, and was relieved to finally hear my voice again. Like a relief of cold air after a blistering heat wave. It was noticeable… but then, he quickly moved the conversation toward more earthy elements, like the snow, the miles of snow on the ground, in Detroit.

He was glad — no not glad — relieved to hear from me.

We quickly jumped the conversation around to updates about the boys, more weather, and I remembered a few of the things that we disagreed on, and just decided to let them rest for now.

So, those things we wrangled over really don’t change that core of who I am as his daughter? Of course not, this I knew. But I heard it. I heard it. I heard the invisible cords that connect father to daughter, mother to son — those relationship ties that bond people together; that blood is thicker than water. I heard it.

Of course, he’s told me. I’ve read about it. I’ve had knowledge that I am loved unconditionally. I know it with my own kids — but this time, I heard it, and I know it in a whole new way.

I’ll tell you one thing, after hearing that Joy in his voice, I won’t wait that long again to let him hear my voice again. Even though it was just New Year’s Day, when I talked to him last.

I can’t wait for the boys’ turn to become aware of that subtle undercurrent that has been there all along, to come face-to-face with the truth that, “I matter so much to mom.” It will change the way they see everything.

How Far I Went For You
S...
Secret to Making Steel Cut or Irish Oatmeal Fast
S...
How to Make a Hymnal Angel
H...
Speed up... No, Slow Dowwwwwn
T...
There's A Crime To Be Solved In Downtown Columbus
T...
The games we try to play
...
Share on FacebookShare on Twitter
clean, Life, love stories, memories
One comment to “So, I Called My Dad”