I have spent many years on Halloween night with a screaming howling baby in my arms, struggling to get home across the street, with another toddler squirming to get away and go back to the same house and get even more of those Skittles. Meanwhile, my husband and older two boys were somewhere in the maze of blocks around our neighborhood. 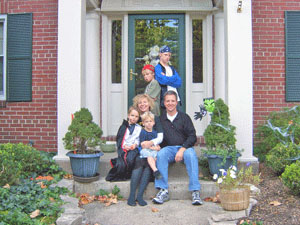 This year, everyone was old enough to enjoy themselves. The weather was perfect. And it was a night to remember. This night has been a long time coming. I just read through this post, and I know I’m far from capturing the magic of the night in this post — but I need some record of it. Here are my favorite quotes from the night — that I can remember. It’s all coming back to me in pieces — so I’ll keep adding to this list. It just all happened to fast! 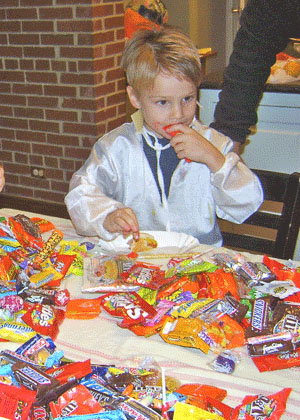 “I’ve had my first Halloween Party, and they’re just going to keep getting better and better every year.”

“Tonight, we have to brush our teeth four times.”

At 6:45, when trick or treating started at 6:00 “I’m done.” And he sat in the stroller and watched his brothers run up to the doors and fill their bags. He just kept saying over and over again, “I’m done.” Just content with what he had.

“It’s hard to know what to say when you trick or treat when you’re little. But now I’ve got it all figured out. ” (Said the 4-year old.)

Without fanfare, and without pomp and circumstance, I usually have one child who just decides he’s not going to dress up for Halloween. However, realize, he is dressed up all of the other 364 days of the year. Yet, on Halloween, invariably, one child just decides he’s taking the day off.

This year, it was this guy. 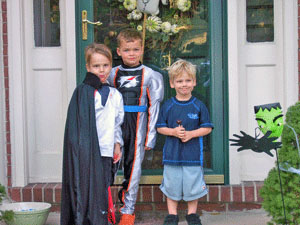 Later, I learned from his brother that he was in fact, “dressed up.” He was a “beach guy.”

One son arrived home from school for lunch, and to get dressed for their costume parade. (I missed the one who is now too big for that sort of thing.) Instead of having lunch ready when they arrived, I was busy buying groceries at the last minute, so they had to wait for the bacon to finish frying and the edamame to finish boiling. I think the entire population of Moms from our neighborhood was there at the same time. And Pepe’s was closed, so I had to navigate through all the candy and last-minute costume displays with children in tow. This slowed me down quite a bit. But of course, one was content to eat a simple sour cream burrito. 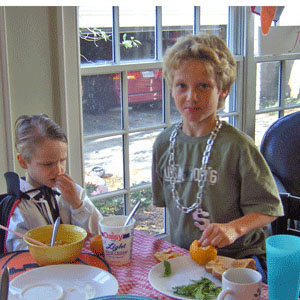 And of course, at the last minute there are costume changes. The Tinman costume was changed last week to a robot costume, which morphed into a cowboy costume, which was completely left behind to become nothing else but a vampire. 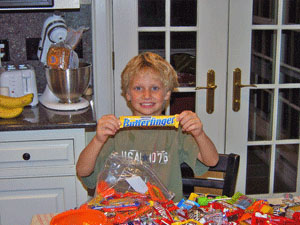 Dinner Time:
How do you compete with the candy and snacks served at the school parties; and the candy yet to come? Chicken — I know they like that. Chicken drumsticks, asparagus (they like them — and they’re easy to ea.) We ate, and we finished with people literally knocking on our door looking for our candy bowl.

We leave our candy alone in a bowl. With so many kids, we need both parents out on the street with the kids. It’s a running tradition. And, those kids say the funniest, cutest things while they’re out on the prowl for candy. I’m so glad I’ve never missed a year. Those moments are more important than candy. Who knows, people may know to hit our house first, so they can be sure to collect the entire bowl before someone else does. I noticed a trend this year; more and more families on our street are leaving the bowl unattended, and hitting the streets with the kids.

I told my sons, when I was a kid, the only thing people passed out were “Bit o’Honeys” Butterfingers were rare.

And here is an obscene amount of candy. We are donating it to the school, who gives it to families in underprivileged neighborhoods. I’m glad to give this up to them. But I wonder. Is it the right thing to do? How good is their dental care? Am I giving them a new problem?

Everyone was done by 7, with one hour left to go. (Imagine how much candy they would have had if they went the full two hours?) Even though there was a campfire with hot dogs and chili outside on the street, we were all content to stay inside and talk about all the different houses, and count the candy. (They lost track.)

The night was full of bad dreams, of gremlins and wolves and good gremlins hiding in our tree house and having dinner with us. It’s all fuzzy to me now. But I had all the details down pat, and recited them back to him at 4 a.m. But, it’s fuzzy now.

It was a perfect night. The weather was warm, and the boys were so much fun. Oh, and who was I? Bat girl, of course. 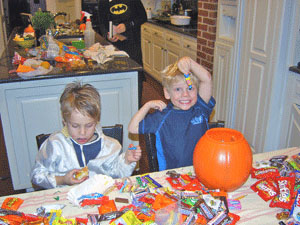 Students: Show Me How You Will Change Lives
L...
Rhythms
T...
When We Canoed Under that Tree
T...
Instant Patina
W...
Waiting on the Fort
T...
Mom, I need Another Tootsie Roll Pop Because I Forgot to Count
I...
Share on FacebookShare on Twitter
clean, holidays, Laugh, Life
7 comments to “Snippets of the day and the night”