My first day out of ski school, my friend, who lives here, joined me for an adventure. She knows the slopes like the back of her hand, and she had big plans to show me, and the little boys, around the slopes. We were going to hit the highlights on the green trails — Wally’s World, Why Not, and Bear Claw. 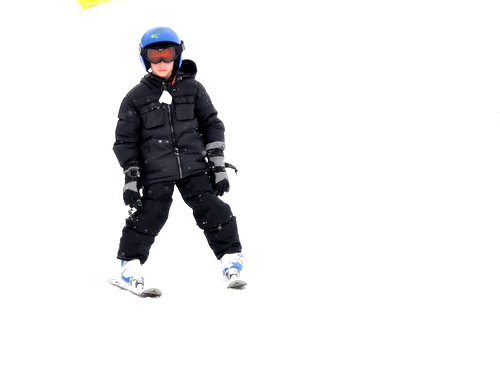 Ironically, my friend, by the way, was the friend who doubled water-skiied with me this summer — and now we were hitting the slopes together.Â  Or were we. 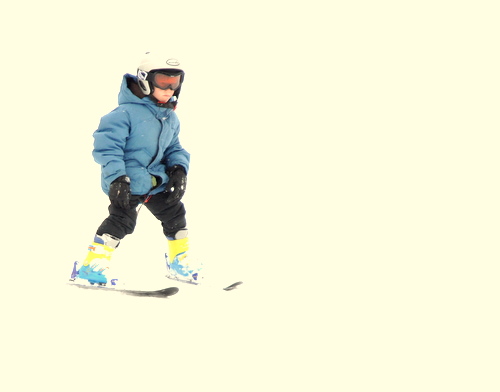 The little boys had other plans. The boys were more interested in the trees than the slopes. Every time we found a clear open area to tear into the snow, the one of the little boys would find some kind of snowboard drop off that went up and around the curve, and into a narrow opening through the trees. The ultimate bad-boy snowboard move.

They could not resist it… 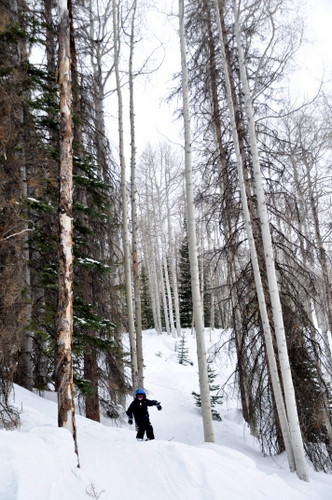 Except,the boys were not snowboarding. So, every single time they went into the trees, which was every 3 minutes, one of them would get stuck… and we would end up pulling them out. For me, this usually involved me getting stuck, or getting pulled over and into the ditch with them. 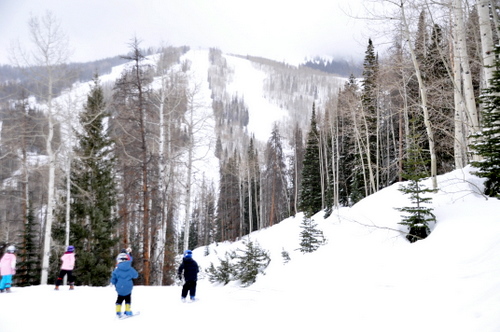 My friend is a much better skier, and has already trained 3 boys of her own to ski. She took the boys beneath her legs and skiied with them to help them get the knack of things. Bless her.

At one point, I got so tired of pulling myself up, or asking for help, that I figured the best thing to do would be to take off my skis. That way, I could stand up easily, and then just snap my skis back on.Â  Why hasn’t anyone else thought of this before?! Except… I was on a hill. Even though I was able to get one ski on, I could not, for the life of me, get the other ski level enough, going downhill sidways, to snap the ski onto my boot. Was my friend waiting patiently? No. She was busy helping the boys! Eventually, I took off my other ski, grabbed them both with my hands and walked uphill to a semi-level ridge. Beyond frustrating. So… this is why no one’s ever thought of this.

Meanwhile, I learn later, that my husband is over on the blacks, trying to fish out the ski pole one of our older sons dropped from the ski lift. This son also got stuck in some trees in the process, and heÂ and I are both struggling, at the same time, to get our skis back on, on the slope.

There were some moments, that my little son hugged the side of the trees so much, that I wondered if this was his way of coping with the heights, and the drop-offs. On the other side, there was a sharp, steep drop off… one wrong slip, and off the cliff he’d go. 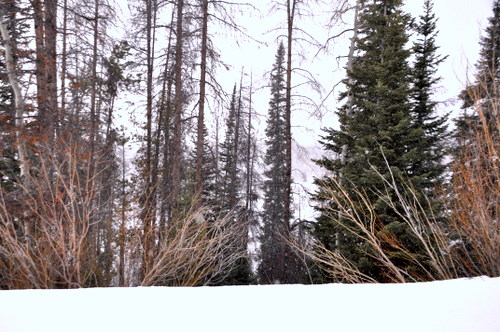 I tried not to look. I just left ski school the day before… and I still couldn’t quite believe these kinds of drop-offs were part of the greens. But, I was glad they were… it just made the whole experience that much more exciting.

After skiing more than her fair share of her ski time with one of my boys between her legs, her back could not take another inch.Â She gave the boysm a stern, but loving lecture, that they were going to have to get down this mountain by themselves, one way or another. That seemed to work.Two hours later, we finally made it down the hill from just one time up on the Gondola.

We planned to go skiing again the next day together… but my friend took a rain check, (wonderÂ why?)Â and sent her son with my older boys instead. Hopefully, she’ll be brave enough to try

If the lifeguard gives you a second chance, take it
...
I'll Meet You At Rendezvous
T...
Vintage Weather Guide
M...
His first big game
May Mayhem
B...
The Car Ride Home
O...
Share on FacebookShare on Twitter
clean, Laugh, Life
4 comments to “Ski School Did Not Prepare Me For This”