We were finished when the sweet sense of fatigue swept over me, head to toe, and I know that I would sleep like a baby that night. Even my lungs gave a sigh of relief. My fingers still felt like they were coiled around the rope, and my legs were resting from the quivering they were doing while trying to hold myself up, and my left ear was full of water that just wouldn’t come out.

The three of us snuck away together on the boat to work. One, my oldest, on his driving, and the second oldest and me, to work on slalom skiing. I don’t think it occurred to me then, but how long has it been, since the three of us were alone together? Eleven years? Since Fun Size was born? Anyway, it was a treasured afternoon.

The heat was sweltering, and we had the lake to ourselves. The boys were patient enough to let me try different ropes, different lengths. I had been secretly wanting to cross the wake, but figured I would have ended up flat on my face, buried under the waves. I didn’t want to risk the chance. But, with this team of boys, I could do that.

The boys were a kind of buffer — if I messed up — they wouldn’t care. They would just laugh… and laugh we did. And that gave me the courage to do a little more, push out those boundaries of fear.

We switched, the second oldest and I, back and forth on that slalom ski. The ski was tricky, and he didn’t think it was possible to get up on just one, the deep water start. I reminded him that I had done it several times, in previous years. That was it — this he would master.  After several laughs, and failed attempts — he did it — by idling behind the boat, trying to hold the ski steady.

I did cross that wake… a bunch of times, criss-crossing back and forth. The first time I ventured across, I was sure I would fall… but somehow I didn’t. But, it wasn’t easy, I found. There was quite a struggle to keep my balance, and stay up, across the waves of a jet ski that just happened to come out. This made my own personal victory even sweeter.

It was a rare moment, that I caught in time. No one else around — no other siblings — just the three of us, without interruptions, passing time on the water.

On our way back in to shore, we talked about how far it is around the lake — two miles. 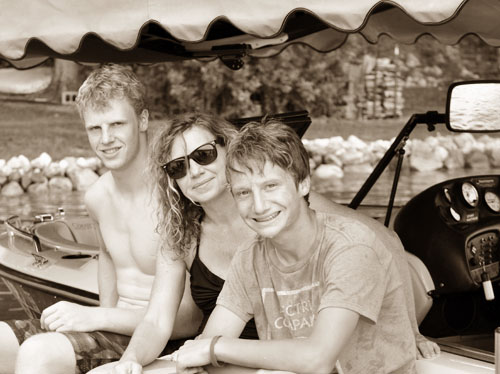 So, we figured that I skied a little more than six miles that afternoon. And, I slept great that night.

Not the Mormon Housewife Blogger
I...
It All Started Out So Well...
W...
Start Building Your Advent On Thanksgiving
I...
The frogs we loved enough to keep
...
Thirty People Heading To A Regatta
I...
List of Honeys That Successfully Lighten Hair
H...
Share on FacebookShare on Twitter
clean, Laugh, Life, the lake house