When I heard the words, I deliberately decided this news would not send me into panic, fear, terror or depression. Denial, this was not. Rather, a purposeful decision to let the words sink in while I simultaneously tried to imagine the worst of the scenario playing out, as if it were a good thing.Â  Getting older gives you the insight, fortitude and wisdom to know how to take bad news with grace. Isn’t grace strength? 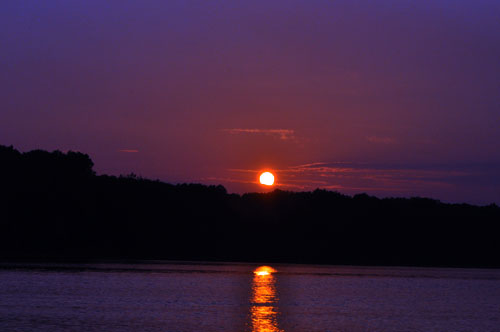 This is a decision. A choice. To turn your mind away from the downward spiral and to see it instead as the elevator lift it might be.

What if the lake dried up? Most say that is impossible. It’s spring fed.Â  Everyone says. But as I listen to those talk who are from Wisconsin, where lake waters have vanished, as a result of farmers taping into the ground water for their crops, I begin to hear the voices of those who say, “this will never happen” as fools.

“Water is on the cusp of being limited in a substantial way almost everywhere around the globe, and because of water’s importance in agriculture, it’s obvious that solutions will have to have an agricultural focus,” says A.J. Bussan PhD’97, a horticulture professor who leads the initiative’s crop production studies.

College of Agricultural and Life Sciences (CALS) at the University of Wisconsin-Madison.

This could happen here. And once it starts, it will be too late to reverse.Â  Legislation is in favor of food production. But, as environmentalist and legislators will now tell you, concentration efforts should be focused on preserving the water resources we have. Even the farmers suffer when the lake is pumped dry.

I did a Google image search to find out what those dried lakes in Wisconsin look like. It was horrifying. Not something I want my kids to see; a land raped. They are not old enough to know how to handle catastrophic news with grace yet. I want to spare them as long as I can.

While we speculate about various reasons for its cause, we can do nothing to stop it.Â  The drying out will be rapid, swift and irreversible.

I try to imagine what life would be like here without the water. The image of grandchildren coming to fish would evaporate. What would become of the people I only see when I’m at the lake? Would we be adventurers, and turn over our love for wakeboarding into mountain biking? There are so many levels to this, I can hardly contain it… but I refuse to take on despair.

How is it possible that a 90 foot lake that has been here for hundreds of years could suddenly vanish? And yes, isn’t that the way with everything today. Aren’t we saying, more often than not, “I thought I’d never see the day, win…” The environmental impact is changing our weather, the landscape and even the clouds we see. Â The very topography of the world is changing so, very fast. There is the Super Blood Moon coming September 27, Â four more blood moons in 2016 ;Â  all rarities.

As I watched everyone in the room that night discuss the vanishing waters, I decided that the underlying factor between the two camps is not based on whether one person believes we need to do something, versus those who don’t. This is not a yes or no. This is about is whether you are poised for adventure or not. Are you going to sit up and pay attention and actually enjoy what is going on around here? Because the world is about to give us the ride of our life.

These shoes were made for climbin'
Santa's Workshop at Skittles
I...
Fast and fresh with lots of Freckles
T...
So long masked bandit
I...
Air
T...
When the Snowmen Melt
U...
Share on FacebookShare on Twitter
clean, Laugh, news, Tears
One comment to “Seeing It As Just One More Big Adventure”