Morning thunderstorms are rare. But, on the odd chance there was one, the streaks of lighting that broke up the gray sky would only enhance our summer morning ritual: Perry Mason; Black and white; 10 a.m; mom and me, with tea. As a little girl, I delighted in in the comfort of knowing that here, for this one hour; good always triumphs over evil, every single time. There was reassurance, morning after morning, in seeing Della Street arrive at the office, without changing her hairstyle, and it was utterly impossible for her to get her dates mixed up, or let Mr. Mason forget an appointment. The entire case hinged on that one surprising clue that Paul Drake would always uncover during the last few moments of the trial. Mr. Mason was wickedly smart, unmovable, and never suffered from a trace of angst, no matter how grim things looked. And, those cars! Those gleaming retro cars with the white-walled tires. Glamour at its finest. In this world of unpredictably and chaos, a good detective show brings a good dose of security – a luxurious break from real-life TV. Perception, one of the great grand detective series from TNT brings Daniel to the forefront. Our hero is Dr. Daniel Pierce, 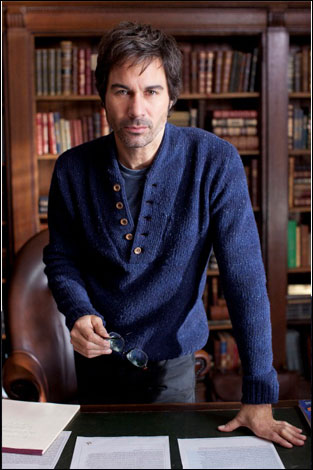 an eccentric neuroscience professor with paranoid schizophrenia who is recruited by the FBI to help solve complex cases. (OK, that’s a stretch — but bear with me here.) Daniel is more like Sherlock Holmes, rather than Mr. Mason, with his uncanny ability to bring disparate information together into a cohesive whole.

Daniel uses his knowledge of neuroscience to see patterns in people’s behavior to see what truth lies beneath. Like Perry Mason, Daniel believes in justice, revealing it with truth, looking for the clues that are hidden behind people’s conscious emotions. Daniel’s gift is enthralling played out in the similar way we watch Sherlock Holmes in a Game of Shadows, giving us a bird’s eye view, in slow motion, of the process of visual detection that crosses the eyes of Sherlock Holmes, just before he makes a life-saving discovery. Daniel’s mind pulls together incongruent clues, (the same ones over overlooked and scoffed at by everyone else), to create the path to justice. Please, TNT, bring us more of those scenes like that! Daniel’s hallucinations are the key to bring him to make connections his conscious mind can’t process; but these hallucinations are also Daniel’s greatest curse, leading him to behave in irrational, potentially dangerous ways. Detective shows are built on a consistently changing panorama of evil, malicious, vindictive characters. New bad guys are brought in on a rotating carousel every week.

To make a detective show work, there must be the consistent backdrop of great good guys – characters who remain staunchly familiar in character, dress, mannerisms and precision-like predictability. Mma Ramotswe, Miss Marple, etc., they’re all there. One of these standby characters is Max Lewicki (Arjay Smith), who serves as his teaching assistant. Admirably, Max, adorably covers for Daniel, keeping him “appearing normal” by covering for his long absences, grading papers, filling in gaps from memory lapses or laying out Daniel’s clothes for the day. Love him! In addition to Max, there is Rachael Leigh Cook, who co-stars as FBI agent Kate Moretti, Pierce’s former student who asks him to consult on certain cases. There’s no other way to put this: she makes me wince. She is too young. The words that come out of her mouth seem so contrived – literally, as if the writers have left out the parts of her mental arguments that led to the final conclusions she draws, and then says on-screen. There are gaps, and unstated thoughts, and it’s difficult for the viewer to follow her logic. More importantly, she looks far to “green” to be drawing such conclusions, and to be patronizing Daniel the way she does. Don’t get me wrong – she does have mutual respect for Daniel – but it’s condescending, as if she hopes someday Daniel will “come around” and be normal like her. She hasn’t earned her stripes yet! Her character needs some fleshing out – and so do the lines. I keep wondering that if she were a gruff gray-haired donut-eating police officer, would the lines bother me as much? Not sure – but I’d love to see it play out.

However, Daniel himself overcompensates for her weakness in character. With fascination, I revel in watching Daniel’s mind spiral through the evidence to lead us to the conclusions I never expected to find. Perception brings us all the surprise and twists that a good mystery ought, and all the comfort, familiarity and reassurance we need against today’s too much reality TV. Perception is a delicious way to pass the time during a thunderstorm.

And then there were four
A...
I’m Bored – Follow-up
I...
How to Create Glazed, Crystalized and Tidy Winter Memories For Your Family
&...
Basil Nasturtium Pesto
T...
Yesterday Morning's Curtains
W...
Little Known Code Words: The Answers
H...
Share on FacebookShare on Twitter
blog, Laugh, Life, Try This
9 comments to “In this world of unpredictably and chaos, a good detective show brings a good dose of security”