“Mom, this frog needs to be RAZED.”
“What do you mean, RAZED? What does razed mean?”
“See Mom, his ear drum is bigger than his eye. That means he’s a boy, and he needs to be RAZED.”
“What is RAZED?”
“You know, how to stay safe.”
“So, we teach them to raze themselves?”
“Razed by a girl,” he said. “This frog is still a baby.”
Oh, you mean raised.
He explained that girl frogs teach boy frogs how to be safe, how to stay away from other creatures that will eat him: He explained, from the book we read last summer:

There were some frogs already dead, lying along the shore that didn’t make it. “Bass,” my son said as we walked past the dead frogs in the grass. I know he doesn’t know that for sure. He just likes to feel authoritative, as if knowing what happened to the frogs offers some explanation for the destruction of his favorite creature, and a bit of comfort. If there is order, if there is a reason, then the world makes sense, and there’s some reassurance in the rhythm of life. Bass eat frogs, frogs die; or frogs eats bugs and bugs die. We catch bass, and then frogs live.

If I had known or seen, ahead of time, that there were dead frogs lying on the shore, I know I would have went outside to collect the frogs and remove them before my son had a chance to witness the slaughter. Too traumatic, I would have thought, for him to see.

Instead, my son arrived first, and explained to me, in casual words; as if he were describing the fact that snow was now on the ground, that bass killed these frogs. In Kayoko Inagaki and Giyoo Hatano’s essay, Young Children’s Thinking about Biological World, 5- to 8-year-old Japanese children discover , with the help of their pet fish, vitalism. The idea that the processes of life are not explicable by the laws of physics and chemistry alone. There is a force beyond the heart, the lungs, and the eyes that keep the frog alive. A knowing that says, “even if you put the parts back together, the frog still won’t come back to life.”

There was one tricky/iffy moment. The water at the lake is still pretty cold for human standards. The frog was cold, and my son knew it. Thinking he was helping, he filled his frog bucket up with warm water, which was a mistake, as this warmed the frog up, so that when he was released back into the lake, the frog was too warm. We watched, and saw that he was barely moving. I called my son to get him back out, and we left him on the rocks. Soon, the frog did crawl back into the lake water and was swimming normally. Another frog, survived, at the hands of a little boy. 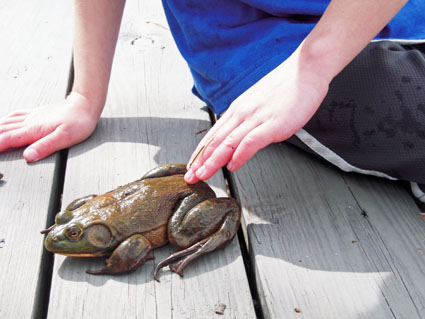 Garden Plans and Markers
A...
Visiting the Magic Kingdom In One Day
H...
How To Pin on Pinterest
I...
Dinners We Can Eat While the Kids are Away At Camp
B...
Q-Tips of Love
F...
Over the Bridge
T...
clean, Life, Science, the lake house
7 comments to “Razing Frogs”